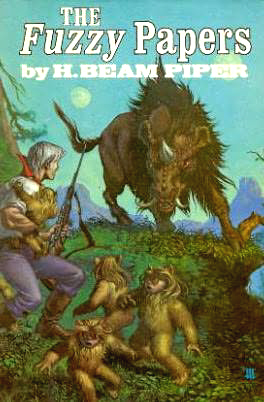 The Fuzzy Papers was one of the first science fiction books I ever read, and it’s one of the small handful of books that made me an SF reader for life.

The Fuzzy Papers contains two novels by H. Beam Piper, Little Fuzzy (1962) and Fuzzy Sapiens (1964, also known as The Other Human Race), and was published by the Science Fiction Book Club  in 1980. I joined the SFBC at the age of 12 at the urging of my friend John MacMaster, who turned me on to science fiction by loaning me book club editions from many of its finest writers, including Frank Herbert and Clifford D. Simak. The club specialized in low-cost reprints of popular SF and fantasy, ideal for a teen with little disposable income, and best of all, it occasionally produced magnificent omnibus editions of genre classics.

The Fuzzy Papers was a perfect example. Available exclusively through the club, it collects two long out-of-print paperbacks in a durable hardcover with a beautiful Michael Whelan cover, all for under 7 bucks. Not the kind of thing an impressionable teen could resist, and I didn’t even bother to try. I checked off my order form and put it back in the mail pronto, and impatiently waited for it to arrive.

I was not disappointed. Piper’s novels follow the adventures of down-on-his-luck space prospector Jack Holloway, who’s been exploring the planet Zarathrustra — a Class III uninhabited world run for profit by mining magnate Victor Grego. But everything changes when Holloway discovers the Fuzzies, curious little humanoids that almost seem to have the power to reason.

In fact, the more he interacts with them, the more Holloway is convinced they can reason — and if the Fuzzies are intelligent, that makes Zarathrustra a Class IV inhabited world, and Grego’s mining privileges would be gone for good. His company isn’t going to let that happen, no matter what the cost.

I adored The Fuzzy Papers the way only a young teen can, and it immediately became one of my favorite books. And while it never became a major genre bestseller the way Dune or Asimov’s Foundation did, a curious thing happened — other writers felt compelled to write Fuzzy novels, especially after Piper’s suicide in 1964. 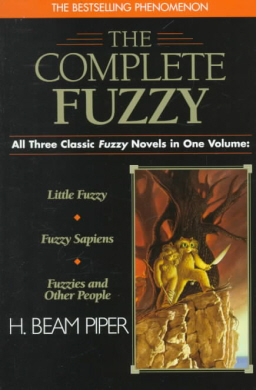 William Tuning was first with Fuzzy Bones in 1981, and Ardath Mayhar followed with Golden Dream: A Fuzzy Odyssey in 1982.

Fuzzy Ergo Sum by Wolfgang Diehr appeared in March, 2011, and you may have seen the most famous example, John Scalzi’s Little Fuzzy re-telling titled Fuzzy Nation, published in May of the same year.

Piper’s influence doesn’t end there — many writers have confessed to the direct impact these novels have had on their own writing. Elizabeth Bear, for example, says her 2007 novel Undertow was directly inspired by Little Fuzzy.

When my son Tim began reading SF in his early teens, the first book I gave him was The Fuzzy Papers. He devoured it with the same enthusiasm I did three decades ago. He’s read the book countless times — so often in fact that I had to replace my original copy, which was on the verge of disintegrating. You’d think a Book Club edition from 1980 would be hard to find in new condition, but that’s because you underestimate the Internet (again). Amazon and eBay have dozens of copies listed on any given week, and I found an unread copy in perfect condition for under 10 bucks… not much more than I paid in the spring of 1980. God bless the Age of the Internet.

Surprisingly, the story doesn’t end there. Fuzzy fans were given one last gift from Piper shortly after The Fuzzy Papers first appeared: the sequel they truly wanted. Among Piper’s manuscripts and papers was an unpublished third Fuzzy novel. It finally appeared in print from Ace Books as Fuzzies and Other People in 1984.

All three novels have now been collected in The Complete Fuzzy, a 454-page compilation volume from Ace Books, originally published in 1998. It has been in print for nearly fifteen years, and is one of the great treasures of science fiction.

If you haven’t yet discovered the Fuzzies, that’s the place to start.

I had read the Fuzzy books years ago and had somehow misplaced the paperbacks during several moves. Fortunately, I rediscovered both Little Fuzzy and H. Beam Piper a couple of years ago when I purchased my first kindle e-reader. After checking out a couple of favorites I typed Beam’s name on the search engine and was amazed to discover that there were dozens and dozens of his stories and books available for next to nothing and in some cases even free. Little Fuzzy was there and I scooped it up along with a dozen or more Piper books. Alas, Fuzzy Sapiens wasn’t there but I’ve got 30+ Piper books to read and I’m sure Sapiens will show up as an e-book sooner or later.

I’ll definitely have to check that out. I don’t *think* I’ve ever read it, although we probably joined the SFBC around the same time.

> Fuzzy Sapiens wasn’t there but I’ve got 30+ Piper books to read and I’m sure Sapiens will show up as an e-book sooner or later.

Y’know, Piper’s got a number of 60s SF novels that I’ve always wanted to read, including SPACE VIKING and THE COSMIC COMPUTER. If you stumble on any of those, let me know what you think!

> we probably joined the SFBC around the same time.

Really? I joined in 1976, the year we moved from Nova Scotia to Ottawa. The first catalog I got had C.J. Cherryh’s BROTHERS OF EARTH as the featured selection.

The SFBC shaped my early view of science fiction and fantasy more than any other single source. What year did you join?

Sometime in the late 70s, although I don’t remember the specific year. I do remember getting the First Chronicles of Thomas Covenant (though we didn’t know it was the first at the time, of course) in an omnibus edition sometime during the early years of my membership.

As I thought about it more, it wasn’t an omnibus of Thomas Covenant, but three individual books sold as a set.

That makes me think that the set probably was released around the time of the release of the final book of the trilogy, 1979, so I would guess that I joined around 1978.

Yeah, I remember the covers for the Book Club editions. I had already bought them in paperback by that point (and loaned them to all my friends).

The books I most remember from the Science Fiction Book Club were the anthologies — THE SCIENCE FICTION HALL OF FAME, THE HUGO WINNERS, and especially BEFORE THE GOLDEN AGE, and the collections: THE BEST OF EDMOND HAMILTON, THE EARLY ASIMOV. I had very fond memories of sitting out in the trailer in our back yard, reading Lester del Rey’s “Helen O’Loy” and Asimov’s “Black Friars of the Flame.” Great stuff.

Well gosh, now I don’t feel so old, I joined the SFBC in 77, and still have many of the books.

You can get the Essential H. Beam Piper in Kindle now (~2900 pages!).
http://www.amazon.com/Essential-Piper-Collection-books-ebook/dp/B0024FB01W

Since it it blocked in Canada, I cannot tell you the price.

I was tempted by the Essential H. Beam Piper, but buyers are frequently burned by these “shoveleware” editions, that are often quickly thrown together and poorly formatted.

I’m willing to pay a little extra for an official version, especially if I know the right folks are getting royalties.

[…] from them — and still one of my favorite SF books, period — was H. Beam Piper’s The Fuzzy Papers in the mid -1970s, containing Little Fuzzy and Fuzzy Sapiens. The most recent was probably E.E. […]