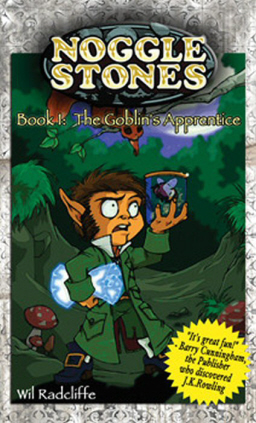 When I first started this series of reviews on self-published books, I had two criteria for reviewing a book.

First, it had to be a self-published fantasy novel. Second, based on the blurb and the excerpt, it had to be a book that I wanted to read. At the time, I didn’t realize that the first criterion would be the more difficult one to figure out.

I discuss some of the difficulties in deciding whether to review a book on my personal blog, but the bottom line is that I almost didn’t review Noggle Stones: The Goblin’s Apprentice. It was originally published by a small press, and only later self-published by the author. I might have still decided that it didn’t quite qualify, since it wasn’t originally self-published, but it certainly met my second criterion: . I really wanted to read this book.

If there’s one word to describe The Goblin’s Apprentice, it’s charming. From the author’s own illustrations, to the poetry, to the language. At times, it’s a bit too charming, but in the end I forgave it. The book seems to be aimed at the Middle Grade level, and it has the same sense of whimsy found in the best books of that type.

The Goblin’s Apprentice is the first book of the series Noggle Stones. The central character is Martin Manchester, an aspiring stage magician in 1899 America. His career plans are interrupted by the fact that our world has merged with a fantasy world populated by elves, dwarves, ogres, and yes, goblins. Martin soon finds himself a student of the goblin Bugbear, a scholar of Non-Logical Thought, which forms the basis of the magic system in the novel. Accompanying them is Bugbear’s scoundrel of a cousin, Tudmire. Their wandering takes them to the kingdom of Willow Prairie, which is really a small town that’s been awaiting the arrival of a king for centuries. After rescuing the dragon bride Maga from a show trial, the heroes quickly get caught up in the war against the Shadow Smith and his army of patchworks.

The characters in this story provide much of the charm. Manchester manages to be both awkward and bold, while Bugbear is proud and clever, surly and wise. The relationship between them is constantly changing, from teacher-pupil, to master-servant, to rivalry and conflict. And you know that they’re not really going to succeed until they finally manage to work together. Tudmire isn’t the scholar that his cousin Bugbear is, but he’s clever and resourceful in his own underhanded, unreliable way. Maga’s a bit obvious as the love interest from very early on in the story, but she certainly isn’t passive. She’s not at all reluctant to take charge in the later part of the book. Finally, there’s Riley, whose playfulness survives some very dark times.

Unfortunately, the main villains don’t have personalities quite as intriguing as those of the heroes, and rely too much on their backstories to make them interesting. The minor villains, such as the corrupt sheriff and tyrannical judge of Willow Prairie, work better due to having less backstory but more screen time.

If there’s one problem with The Goblin’s Apprentice, it’s that sometimes it tries too hard. I grew used to the frequent alliteration and rhyming in the prose, and a lot of the time it worked well, but occasionally it went over the top, such as in this passage: “Hands trembling with drumming dread, mouth smacking with dry despair, eyes wide with delirious dismay, he laid his fingers upon the ornate lid… and opened it.” That’s on the extreme side, and it felt like the author was trying so hard to get the alliteration that he lost sense of what he was actually trying to do. But fortunately, while he frequently skirted the edge of such over-flowery language, Radcliffe didn’t go over the edge too often, and I think that this is the worst example.

In addition to the poetic techniques in the prose, at times the novel employs actual poetry. And most of the time it fits the story, such as the opening poem:

From my flesh I make this scroll.
I draw ink from veins that bleed.
With my heart I craft these words;
I’m this book that you now read.

In darkness I walk in circles.
In circles I walk forlorn.
Yet in you I live forever.
For when you read, I am reborn.

Not all the poetry fit so well, but for the most part it adds to the story rather than detracts from it.

The one part of the book that never quite made sense to me was the magic system. There are four basic precepts of Non-Logical Thought, which can never be repeated enough (and the author repeats them aplenty): “Number one: Reality is thought. Number two: Logic restricts Thought and thus restricts Reality. Number three: Abandon Logic, abandon restriction. And number four: Unrestricted Thought equals unrestricted Reality.” Since the magic system is by nature non-logical, how do you place limits on it, giving it a place in the framework of the story without letting it take over?

There are times when the plot meanders, and what happens doesn’t quite follow from what came before. And while the ending isn’t quite deus ex machina, it could have benefited from a stronger set-up. Despite that, there is still a rightness to the ending, a sense that all the promises of the story up to that point have been fulfilled.

Noggle Stones: The Goblin’s Apprentice is available at Amazon as an e-book, and in physical form from 3 Rivers Archery.

[…] when I reviewed the first Noggle Stones book, The Goblin’s Apprentice, I knew that there was a sequel. Of course I could only review one book at a time, and I figured I […]