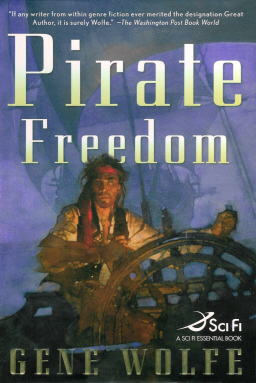 I love bargain books. I love pirate books. And I love Gene Wolfe books. So I don’t need to tell you how I feel about bargain pirate novels by Gene Wolfe.

Pirate Freedom was released in hardcover in November 2007, and in trade paperback three years later. It’s a swashbuckling adventure novel — Sci-Fi Weekly called it “straight up adventure in the mold of Robert Louis Stevenson, Rafael Sabatini, or even the Pirates of the Caribbean films” — but as you’d expect from Wolfe, he adds an unexpected twist or two.

It begins in a monastery in Cuba the day after tomorrow, where a boy named Chris realizes he’s not meant for the priesthood, and sets out for the streets of Havana. From there it becomes a tale of time travel and fantasy adventure. The San Francisco summed it up thusly:

Plenty of action, romance, and historical color. Nearly every pirate cliche is given a new spin, from mutinous crews to cursed ships, from beautiful women in disguise to treasure beyond imagining.

Still, I hadn’t gotten around to picking up a copy until this week, when I noticed that Amazon had marked down the price by 60% — to $9.98 for the hardcover, and just $6.40 for the trade paperback. If you’re interested in a copy, act quickly; there are only about half a dozen left.

Pirate Freedom was published by Tor Books. It is 320 pages, and was originally priced at $24.95 for the hardcover, and $15.95 for the trade paperback. The gorgeous cover is by David Grove (click on the image at right for a larger version).

Loved it, Wolfe at his most Lupine.

A longer version of the above statement: http://billwardwriter.com/pirate-freedom-review/

A superb review, Mr. Ward. I should have just quoted you!

“In many books Wolfe achieves narrative and thematic depth while at the same time delivering a gripping and imaginative adventure story… this is satisfying purely as a historical novel. Like the Latro series, Pirate Freedom is an excellently realized portrait of its time and place….

Pirate Freedom is one of Wolfe’s most accessible books, perhaps alongside another historical novel of his, The Devil in a Forest, and certainly one that could best serve as an introduction to his work for fans of historical adventure.”

Snagged a copy of the trade paperback.

Interestingly, the Kindle version is more expensive than either the trade paperback or hardcover versions–though granted by only a penny versus the hardcover. Not great economics for a version that one can’t resell!

True, but you’re comparing the regular Kindle price to the remaindered (discounted) print versions. Once those last 5 copies are gone, the Kindle version will be a lot cheaper.

And to be fair, there are occasional discounts to the digital version as well. It’s hard to beat a Kindle book for just $2.99, or even 99 cents.

True, but I can only compare what’s available now. Not to mention, there are additional new copies available at even less than Amazon’s prices (although with shipping it works out about the same), and will probably continue to be for some time.

Moreover, there are even cheaper used copies available of the hardcover (oddly, the cheapest used paperback is actually slightly more than the cheapest new paperback).

Has the digital version ever been on sale for those prices, or anything less than its current price? If so, I am kicking myself for having missed it.

> Has the digital version ever been on sale for those prices, or anything less than its current price?

Not to my knowledge.

We need a good way to alert our readers when the major book sellers have sales on big titles, though. I’ll convene the great minds here at Black Gate to dwell on the matter…