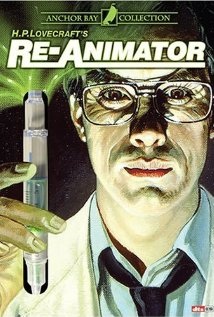 And you thought your holiday travel was a nightmare…

On Tuesday of this week, “sources” from Chicago’s O’Hare International Airport reported to the Chicago Sun-Times that 18 human heads had arrived from Rome just before Christmas and were on their way to a research facility in the suburbs when they were stopped by security.

For attempting to smuggle in a wheel of pecorino cheese…?

Nope. Officials initially said it was a paperwork problem that prevented the heads from reaching their final destination, but apparently the crack reporters at the Sun-Times have just discovered the hold-up is actually connected to “an ongoing investigation at the suburban facility in question.” But before you jump to all conclusions, the investigation is “absolutely not” connected to the shipment of the heads, the source said.

The heads were unceremoniously shipped as cargo on a Lufthansa Airlines flight, but “were properly preserved and tagged as human specimens,” said Tony Brucci, chief investigator for the medical examiner’s office.

The Coalition for Airline Passengers’ Rights has filed a complaint with the FAA saying the heads were confined to the cargo hold for the 9 hour and 15 minute flight without the benefit of inflight catering or entertainment.

Okay, that’s not true.  But the rest of this is. 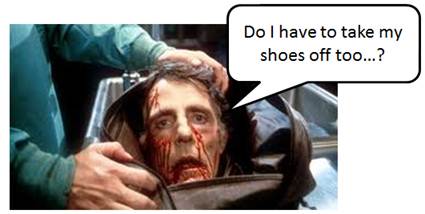 Brucci said U.S. Customs officials at O’Hare initially held up the shipment, when they found the paperwork to be “a little confusing.” Then the containers were X-rayed, and that’s when officials discovered what was inside.

Brian Bell, a spokesman with the U.S. Department of Homeland Security, said earlier Tuesday that the specimens appear to be legitimate medical samples.

There’s no issue with the transportation of body parts for medical purposes. There’s nothing against the law that says you cannot ship them, provided you have the right documentation. Everybody here is ‘Oh my gosh, you got a box of heads’ and everybody thinks that it’s unheard of, but it is a potentially legitimate medical shipment. We’ve seen it at various ports in the nation.

The specimens, which were still covered in skin (okay, ick) were sent to the Cook County Medical Examiner’s office for inspection, authorities said. Foul play is not suspected in the collection of the heads.

If you have anything to say about this, and the possibilities are indeed endless, post a comment or drop a line to sue@blackgate.com.