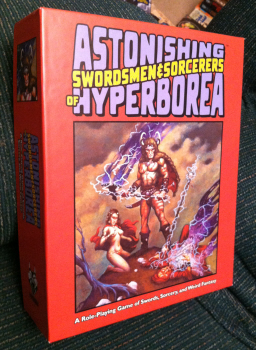 Back in 2010, I attended Garycon II, a rapidly-growing game convention in Lake Geneva, Wisconsin, held in honor of Gary Gygax, the co-creator of Dungeons and Dragons. In my BG convention report I said:

One of the delights of the con for me was the discovery of Charnel Crypt of the Sightless Serpent, an adventure for the forthcoming Astonishing Swordsmen & Sorcerers of Hyperborea system by Gary’s Castle Zagyg co-author Jeffrey Talanian. A black and white staple-bound folio sold at a tiny table in the hallway for five bucks, Charnel Crypt reminded me of nothing so much as Dave Arneson’s original Blackmoor supplement, which first appeared in 1975 (and cost about the same.)

According to the program book Talanian was running players through the adventure in one of the gaming rooms, and I wished I’d had a chance to find them. He describes Hyperborea as “largely influenced by the fictional works of R.E. Howard, Clark Ashton Smith, and H.P. Lovecraft.”

That I’d like to see. He promises the rules will see print this year.

I’ve been keeping an eye on Jeff’s website at North Wind Adventures ever since, and I’m happy to say my efforts were not in vain. Astonishing Swordsmen & Sorcerers of Hyperborea was released in October and proved well worth the long wait.

Astonishing Swordsmen was clearly created in homage to the original boxed edition of Dungeons and Dragons (what’s known as the OE version, circa 1974, by Old School Renaissance gamers), and the contents reflect this. The box is massive — it’s like Gygax and Arneson’s original release got a Charles Atlas bodybuilding makeover. I was ooooing and awwwing for the first ten minutes as I pulled it open.

My favorite piece shows four wide-eyed, fish-faced inhabitants of a decaying port town glancing fearfully at the reader; a merchant is quickly closing his door, and a parent hustles his mutant child away as you approach. What will the players do as they enter town? Destroy it? Take pity on its bizarre, inhuman inhabitants? What disturbing mysteries will they find? Only the game knows. 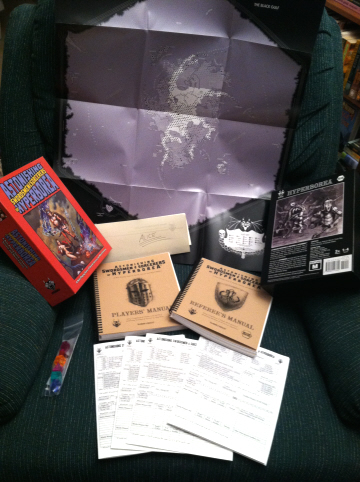 Spending just a few moments with these books took me right back to the heady days of the late 70s, when the marriage of gaming and weird fantasy was still brand new, and role-playing introduced me to a whole new kind of communal fantasy.

Let me say a word or two about those books. Like the box they came in, they’re massive. The three game books in my original Dungeons and Dragons boxed set were a slender 38 pages (I know — I just checked). There are only two books in the Astonishing Swordsmen box, but they’re both around 240 pages.

The books aren’t the only thing you have to coo over. My copy came with all the goodies at left (click on the image for a bigger version): a huge 22 x 28-inch poster map of Hyperborea, 6 character sheets, 6 polyhedral dice, and a personalized hand-written thank-you letter from author Jeffrey Talanian — made out to Alice (that’s the last time I use my wife’s Paypal account to pay for a role playing game).

I’d love to give you a detailed review, but the truth is I’ve been doing exactly the same thing as I did over three decades ago when I first purchased D&D — flipping back and forth excitedly between the books, not so much reading as soaking in the experience.

Let’s back up. So what is Astonishing Swordsmen, then?

It’s a hard-core sword-and-sorcery role-playing game with clear allegiance to the roots of weird fantasy. Meaning exactly what you think it does — the pulp fiction of Robert E. Howard, Lovecraft, and Clark Ashton Smith. Players aren’t offered generic character classes such as fighter or magic-users, or even Tolkien-inspired Rangers and Halflings. Instead, you play as an Amazon fighter, Atlantean magician, Esquimaux shaman, Hyperborean warlock, Ixian necromancer, Keltic barbarian, Kimmerian cataphract, Pictish thief, or Viking berserker.

Much of the second book is devoted to detailing the setting of Hyperborea. This from page 178 of the Referee’s Manual:

Hyperborea… quite literally means “Beyond the North Wind.” According to the ancient Greek religion, the Hyperboreans were a mythical race who lived up to 1,000 years and worshiped Apollo and Artemis. Noted by Herodotus in the fifth Century BC (although the “Father of History” cites earlier sources, including Hesiod and Homer), the Hyperboreans were reputed to dwell “beyond the north wind” in a paradisal land of sunshine and plenty…

Hyperborea is a “micro-setting”: i.e., it is of limited geography. It is designed for use on its own or in conjunction with another setting of the referee’s choice; indeed, Hyperborea might be just beyond the North Wind of any campaign setting. 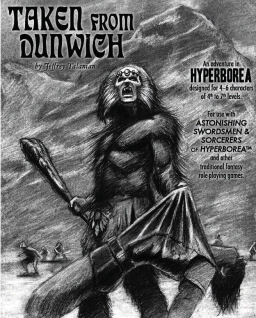 There is no sample adventure included (although the aforementioned Charnel Crypt of the Sightless Serpent might serve that purpose well). But the book is packed with details on the geography, history, and strange gods of Hyperborea, including the mysterious and ancient Great Obelisks that stand at the six corners of the world, the Rapids at the End of the World, and great R’lyeh itself.

One minor disappointment is the small number of supporting products. Other than Charnel Crypt, only one slim adventure has been published so far: Taken from Dunwich, an 18-page booklet available in print and PDF. The complete product page for North Wind Adventures is here.

Overall, I’m extremely pleased with Astonishing Swordsmen & Sorcerers of Hyperborea, and expect to spend the last few days of 2012 digging deeper into the contents of the box.

Of course, you can’t judge a role-playing game by reading — you need to start rolling dice to really get a sense of it. I hope to recruit a few members of my gaming circle to try it out with me. Based on what I’ve seen so far, I don’t think that will be hard.

Astonishing Swordsmen & Sorcerers of Hyperborea was published by North Wind Adventures in October, 2012. It is priced at $50 for the boxed set, or $10 for a watermarked PDF offered exclusively through RPGNow.

I’m not even role-playing anymore, and I STILL want this. It looks grand…

I feel exactly the same way.

[…] a nutshell is the story of the resurgence of OE (Original Edition) Dungeons and Dragons games like Astonishing Swordsmen & Sorcerers of Hyperborea, Dungeon Crawl Classics, Labyrinth Lord, and even the recent first edition AD&D reprints. And […]

[…] companies. We’ve featured some of the best products here on the BG blog, including Carcosa, Astonishing Swordsmen & Sorcerers of Hyperborea, Dungeon Crawl Classics, Labyrinth Lord, and even the first edition Premium AD&D reprints from […]

[…] writer and artist behind the terrific Astonishing Swordsmen & Sorcerers of Hyperborea, which I reviewed last December — and buy a copy of the hot-of-the-press first issue of Gygax Magazine. I also […]