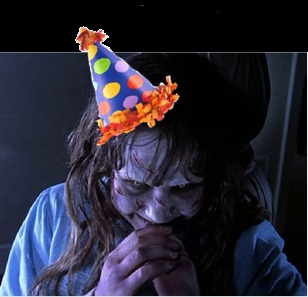 This week in 1973 a fourteen-year-old girl hurls obscenities, vomits and behaves like Satan himself.

Today this would be just another episode of an MTV reality show, but 39 years ago it was a move called The Exorcist which changed the horror genre forever.

The Exorcist was released theatrically in the United States on December 26, 1973 by Warner Bros. On April 2, 1974 the film had earned ten Academy Award nominations, winning two (Best Sound and Best Adapted Screenplay). In the years since it has been voted the Scariest Move of All Time by Entertainment Weekly, Maxim and the UK’s The Times newspaper and according to BoxOfficeMojo, has taken in around $232,906,145 at the US Box Office and $208,400,000 in foreign markets for a combined worldwide total of $441,306,145; huge numbers for a movie with a production budget of $10.5 million.

In short, the movie wasn’t just a hit – it was a global phenomenon. If adjusted for inflation, The Exorcist would be the top grossing R-rated film of all time.

Most of us weren’t around to remember the hysteria that went along with the release of this film, but let’s just say there hasn’t been anything quite like it sense.

Which sort of makes me wonder why? I mean, you just can’t buy this sort of publicity today no matter how many social media outlets you go viral on…

For instance, Christian evangelist Billy Graham claimed an actual demon was living in the celluloid reels of this movie. Author William P. Blatty recounts, with a genuine sense of bemusement, the following episode:

Billy Graham said something like, ‘there is a power of evil in that film, in the fabric of the film itself… I would have attributed it to senility except he (Graham) was only 39 or 40 at the time. But to this day I still have no idea what he meant by that. I mean, obviously there is a power in the film to move you, to have a disturbing effect upon the viewer which is greater than the sum of its parts. It’s mysterious, yes. But my God, it’s not evil! 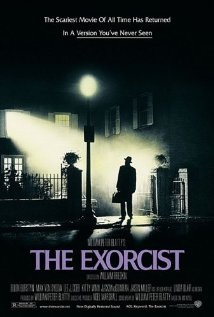 Then there is the audiences’ reaction. Were people just more sensitive in the 70’s? Was it some sort of mass hysteria? Could this be the same people who thirty years later sat through a viewing of Saw?

Upon its initial theatrical release The Exorcist affected audience members so strongly that at many theaters, paramedics were called to treat people who fainted and others who went into hysterics.

“My janitors are going bananas wiping up the vomit,” complained Frank Kveton, manager of a United Artists Cinema in California. Kenton also has had to replace doors and curtains damaged by unruly crowds.

One filmgoer who saw The Exorcist during its first week in theaters fainted and broke his jaw on the seat in front of him. He then proceeded to sue Warner Brothers and the filmmakers, claiming that the use of subliminal imagery in the film had caused him to pass out. The studio eventually settled out of court for an undisclosed sum.

In spite of these facts, the really startling bit of trivia comes from the news The Exorcist did not make regarding the issue of its rating classification. Despite Warner Brothers’ initial fears concerning the graphic nature of some of the film’s scenes, the 1973 ratings board of the MPAA awarded the movie a lenient “R” rating without a single cut. Jack Valenti then President of the MPAA is quoted as saying,

There is no confusion about what kind of film The Exorcist is. Much of what might concern some people is not on the screen: it is in the mind and the imagination of the viewer. A film cannot be punished for what people think because all people do not think alike. What might repel and frighten some people might not do the same to others.

I am trying to get my brain around the idea that this was all 1973 and compare it to how a movie showing this sort of imagery for the first time would fare in the rating system in 2012.

Check out this newsreel footage of audience reactions to The Exorcist. It’s scary for a whole bunch of reasons…

Have a comment or question? Post it here or drop a line to sue@blackgate.com. Happy New Year from Goth Chick News.

39 years! Although I was only 5 at the time of its release, seeing that number makes me feel OLD. How could it have possibly been that long ago? Wow!

If you really want to feel old, look up a picture of Linda Blair…

Oh wow! She is definitely not a little kid anymore. But actually I think she has aged well and looks nice.