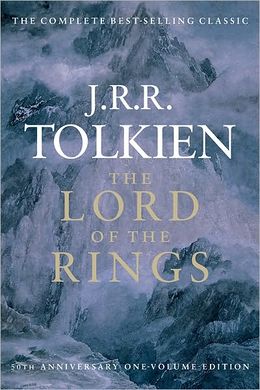 ‘Tis the season for Top Ten lists. David E. Harris kicked it off here this morning with his Arbitrary Top 10: Fantasy Films (which missed Watership Down and It’s a Wonderful Life, but at least had the good sense to include Jumanji), but similar lists have been popping up all over the blogosphere.

Locus Online conducted a poll to determine the best novels and short fiction of the 20th and 21st centuries last month, with five categories: science fiction novel, fantasy novel, novella, novelette, and short story. Since all votes were write-ins counting has taken a while, but on Friday Mark Kelly announced the results for the novel categories. The complete poll includes the Top 50 winners; here are the Top 10 Best Fantasy Novels of the 20th and 21st Centuries:

There’s some confusion as the list includes both series (e.g. The Lord of the Rings, A Game of Thrones) and individual novels in series (e.g. Nine Princes in Amber, Harry Potter and the Deathly Hallows). It’s especially hard to understand how the votes broke down when the series in question cross the threshold between centuries (eg: A Game of Thrones, Harry Potter). At least, I’m confused.

Mark promises that results in the Short fiction categories will be available “as soon as possible.”

I think it is easier to just look at them all as individual novels. The only “series” listed is The Lord of the Rings (and could that not be seen as one large novel broken up into a “trilogy”?). A Game of Thrones refers to the first book of A Song of Ice and Fire, I think. Otherwise, why not use the name of the series? And don’t forget the Bas-Lag series has an appearance on both lists.

The Lord of the rings is one novel that was split up into three parts for publishing reasons. And I don’t see A Game of Thrones series listed I see the first novel to the series.

Top ten lists in fantasy should all just be by series. Even if Lord of the Rings is one novel, with three books, most of the other works listed are going to be multi-volume. including the whole series simplifies things, and keeps an author from taking up multiple spots on the list.

I’m sorry to say I wound up skimming THE CITY AND THE CITY. Going back to the 20th Century, I think it’s high time I checked in with LITTLE, BIG. I must be missing something!

The Silmarillion ranks at #22 on the novel list, above Mythago Wood and Bridge of Birds. Sigh. I love The Silmarillion. It is many things, some of them awesome, but it is not a novel. It could make sense as a collection of short fiction, but I suppose that category wasn’t on offer.

While I’m glad to see Robert E. Howard included, I’m a bit confused as to which book they are referring to:

Is that the 1950 “Conan the Conqueror” (the Gnome Press edition of “The Hour of the Dragon,” Howard’s only Conan novel) or the 1954 “Conan the Barbarian” (Gnome Press collection of several stories)?

Argh, wait, Swords of Lankhmar WAS a novel, I meant Martian Chronicles.

Pretty good lists, though I am embarassed not to have read China Melville. I’m surprised to see American Gods atop the 21st Century list. I didn’t even think it was the best of Gaiman’s books (I loved “Neverwhere”). My personal 20th-Century sleepers would have been “The Shattered World” by Michael Reeves, and Zelazny’s “Jack of Shadows.” I’m also surprised that Lloyd Alexander’s Taran Wanderer series was not included.

I’d add a vote for Shattered World (and continue to dream that someday Reaves might write a third book in the series). I’d also try to squeeze Michael Shea onto the list somewhere.

I was about to speculate that Lloyd Alexander’s Chronicles of Prydain were omitted from the list because they were written and published for children. They’re specifically middle-grade chapter books, which is a stage younger than YA. Then I checked, and the list includes The Lion, the Witch, and the Wardrobe, some J.K. Rowling, The Little Prince, and A Wrinkle in Time. So I shrug in bafflement. Why not Taran?

> The Silmarillion ranks at #22 on the novel list, above Mythago Wood and Bridge of Birds. Sigh.
> I love The Silmarillion. It is many things, some of them awesome, but it is not a novel.

Well said. I’m a fan of THE SILMARILLION as well, but it ain’t a novel.

And BRIDGE OF BIRDS should have been in the Top Ten, in my opinion.

[…] weeks ago we reported that Locus Online, the web-based offshoot of the newspaper of the science fiction and fantasy […]

[…] had some wonderful conversations here at Black Gate about best-of lists lately, as we do whenever a high profile best-of list comes out. Two contradictory […]

[…] Locus Online on the Best Fantasy Novels of the 20th Century […]

[…] Habits,” a posting from Matthew David Surridge, and then came John O’Neill’s posting of Locus Online’s list of the Ten Best Fantasy Novels of the 20th Century. Locus places Little, Big at number nine, between Harry Potter and the Philosopher’s Stone and […]