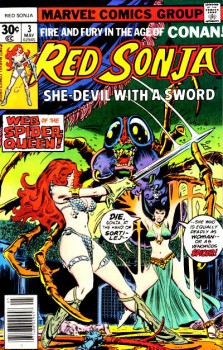 You know how sometimes you’re watching the trailer to a movie and it looks really good and you suddenly realize that you’ve figured out the surprise ending of the movie just by watching the trailer? I don’t mean that you make an educated guess based on the clues in the trailer and it happens to be correct. I mean that someone actually cut a crucial scene at the end of the film into the trailer so that you’re watching the eight year-old boy change into the child-snatching goblin. And maybe you go see the movie anyway because it still could be good; but you’ve lost a little something going in, that sense of surprise, because the filmmakers spoiled their own film.

Anyway, Sortilej is a giant spider in human form. Surprise. Thanks, cover.

So, “The Games of Gita” starts with a fat, opulently-dressed Athosian being pulled in a rickshaw by a lean, rag-wearing Zotozian, whipping him on. Red Sonja stops the pair to demand that the Athosian lets his rickshaw-puller (What’s the word for that?) have a drink of water before he collapses. Because that’s compassion in the Hyborian Age: offering a glass of water to a slave being whipped to death.

So the fat guy shrugs off her concern by saying that he can easily replace the man if he dies of thirst or a severe beating. Then he asks Sonja if she’d like to accompany him to a banquet as his date. She says no. Technically, she says, “The fires of seven hells wouldn’t tempt me to sup with the likes of you.” (Someone please use this line the next time a jerk invites you to dinner.) And then she kicks his ass. Literally, the last panel of page three is her boot connecting with his ass.

The fat guy runs off and Red Sonja is then approached by a stranger named Mikal. He offers to escort her to the wealthy city of Athos. Mikal is very mysterious. Mikal wears a hood. Mikal has a goatee. Mikal is probably the devil. This bothers me just a little because his name is a Tolkienized version of mine.

[Click any of the images in this article for bigger versions.]

It turns out that the Games of Gita are a plot by the Athosian queen, Sartilej. She wants the Athosians to win; but if they lose, she then uses the penalty of the game as an excuse to remove a potential warrior from the slave caste. So the games are similar to the famous archery contest trap from the story of Robin Hood. Except they work.

Red Sonja decides to compete in the games on the side of the Zotozians. The Athosians are enraged that a woman is now competing against their men. They’re even further enraged when she beats them all. Sartilej at this point decides that killing Red Sonja for her victories isn’t enough. She won’t stand one more humiliating defeat for her city and thus challenges her to combat herself.

Red Sonja then competes against the Queen of Athos in a discus-throw, a javelin toss, an archery contest, and a foot race. And, might I add, she does it all in half a page (take that, decompressed storytelling method). And, amazingly, the queen and Sonja are evenly matched in each event. (Gosh, it’s almost as if the queen has some sort of secret edge that we can’t figure out because we didn’t notice THE COVER.) So, finally, she challenges Sonja to a hand-to-hand grappling competition.

And the wrestling match is going in Sonja’s favor for about a page until Sartilej stretches out her hand for help and one of the guards approaches from behind Sonja and hands the queen a knife (kind of wishing it was a chair, but that’s how it goes). But Sonja manages to knock the knife from her hand, flips her, and then (I swear this is true) kicks her in the ass. And that’s the end of the fight.

Until, in a final act stunner that nobody saw coming, Sartilej turns into a giant spider. We haven’t seen her evidence any special magical powers up to this point. She’s never used them to say, I don’t know, make her people stronger and faster so that they could win at the Games of Gita.

So a giant spider is approaching Red Sonja. On the javelin-throwing field. No points to figure out how the giant spider dies in this one.

The people of Zotoz want to make Sonja their queen at this point; but she turns her back on the siren call of queenship because she has seen power destroy too many people. Also because establishing a monarch based on her ability to kill giant spiders is stupid. Mikal is allowed to follow her, “but only for a while.”

So I liked this issue a lot more than the insanely-constructed plot of issue two or the unicorn love story of issue one. This is Red Sonja fighting on behalf of the oppressed and enslaved for no other reason than that she likes to fight and has nothing better to do. Once again, she doesn’t get paid (not even a medal or certificate of participation). And, curiously, there’s nothing in the death of the queen that seems to prevent the Athosians from continuing to oppress the Zotozians. On the plus side, bikini wrestling and a giant spider.

Next Week: Red Sonja and the Lovecraftian Sideshow

> Anyway, Sortilej is a giant spider in human form. Surprise. Thanks, cover.

Michael Penkas, you bust me up.

And you have made me a Red Sonja fan, entirely by proxy. I don’t want to read the issues, I just want to return here every Tuesday to enjoy your re-telling of the story.

She can’t get a medal or certificate of participation, or a day’s pay. Where would she put it? In her boots or her gloves, I suppose, but since those are the only gear she has that could possibly carry any cargo, I imagine they’re already full. The metal polish and sharpening stone to keep her sword in good order would pretty much fill them to capacity. Yes, if she ever got paid, she’d definitely need to acquire a garment with a pocket. Never gonna happen.

Memo to myself: wear clothes with lots of pockets when sitting down to write.