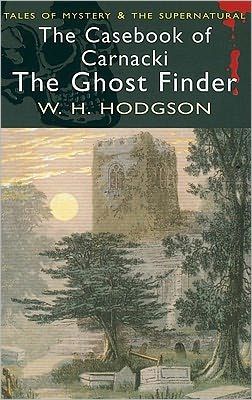 William Hope Hodgson is almost unique among his contemporaries: his most famous novels, The House on the Borderland and The Night Land, have been continuously in print for the better part of the last hundred years. H.P. Lovecraft described The Night Land, first published in 1912, as “one of the most potent pieces of macabre imagination ever written.”

But Hodgson wrote many other highly-respected works of horror and dark fantasy, and here his publication history is a little more spotty. Perhaps chief among them are the tales of Carnacki The Ghost Finder, a supernatural detective who came up against horrors that would have made Van Helsing blanche. I’m pleased to say that the Wordsworth Tales of Mystery And The Supernatural have not let us down, and in 2006 they brought the complete collection back in print in a handsome and inexpensive edition.

“‘I saw something terrible rising up through the middle of the ‘defence’. It rose with a steady movement. I saw it pale and huge through the whirling funnel of cloud – a monstrous pallid snout rising out of that unknowable abyss. It rose higher and higher. Through a thinning of the cloud I saw one small eye… a pig’s eye with a sort of vile understanding shining at the back of it.”

Thomas Carnacki is a ghost finder, an Edwardian psychic detective, investigating a wide range of terrifying hauntings presented in the nine stories in this complete collection… Encountering such spine-chilling phenomena as ‘The Whistling Room’, the life-threatening dangers of the phantom steed in ‘The Horse of the Invisible’ and the demons from the outside world in ‘The Hog’, Carnacki is constantly challenged by spiritual forces beyond our knowledge. To complicate matters, he encounters human skullduggery also. Armed with a camera, his Electric Pentacle and various ancient tomes on magic, Carnacki faces the various dangers his supernatural investigations present with great courage.

Josh Reynolds explored the career of Carnacki The Ghost Finder in greater detail as part of The Nightmare Men series last year.

The Casebook of Carnacki The Ghost Finder by William Hope Hodgson was published in 2006 by Wordsworth Editions. It is 191 pages in paperback priced at $6.99. There is no digital edition.

“And I’d have gotten away with it if it weren’t for those meddling kids!”

If you do want Carnacki electronically, all of the stories can be found in http://www.amazon.com/Collected-Fiction-William-Hodgson-ebook/dp/B00725WK9A/ref=sr_1_15?s=digital-text&ie=UTF8&qid=1356146328&sr=1-15&keywords=william+hope+hodgson (although you’d need the hardcover to really appreciate the cover) or from other, cheaper, public domain sources.

The Night Shade books are the definitive Hodgson. They’re also gorgeous editions, and packed with material that’s been out of print for far too long.

I had no idea there were digital versions — the original printings were seven years ago. Thanks for the link, Joe.

John: Off topic, but you may want to do another “deals” post, or something along those lines. The Kindle version of “Prince of Thorns” is on sale for $1.99, today only, Saturday, December 22.

I originally got the Hodgson (and the complete Clark Ashton Smith) from the Baen eBook site. I just wish they’d also put up electronic versions of Dunsany, Manly Wade Wellman and (especially) Karl Edward Wagner.

I believe there have been three Carnacki stories read on Pseudopod and/or Podcastle. They were read by Paul S. Jenkins, who has a great voice for the stories. I loved those.

I read Adrift on the Haunted Seas: The Best Short Stories of William Hope Hodgson earlier this year and was overall pretty disappointed. But more to the point, I was disappointed by the Carnacki story in it, “The Haunted Jarvee,” which I thought fell well short of those read on the podcasts.

> John: Off topic, but you may want to do another “deals” post, or something along those
> lines. The Kindle version of “Prince of Thorns” is on sale for $1.99, today only

A great idea, and thanks for the tip! Done.

> I originally got the Hodgson (and the complete Clark Ashton Smith) from the Baen eBook site.

I’m embarrassed to admit I haven’t checked out the Baen eBook site. Have to rectify that this week!

> I believe there have been three Carnacki stories read on Pseudopod and/or Podcastle. They were read by Paul S. Jenkins,
> who has a great voice for the stories. I loved those.

Thanks for the recommendation. Carnacki podcasts! There is a Santa Clause.

[…] Vintage Treasures: The Casebook of Carnacki the Ghost Finder […]

[…] Whistling Room” is one of William Hope Hodgson’s Carnacki the Ghost Finder stories. Carnacki was an Edwardian ghostbuster invented by Hodgson for a series of stories when he […]

[…] year his last book was released, The Adventures of Lucius Leffing, the fourth volume featuring his Carnacki-like occult […]