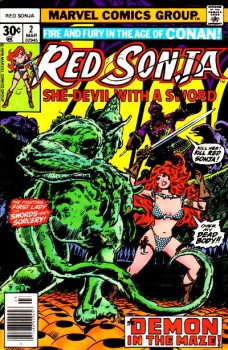 Honestly, I’ve tried twice to summarize “The Demon in the Maze,” and I just can’t figure out how. It’s a psychedelic mess of gonzo insanity. It reads as if co-writers Roy Thomas and Clara Noto just switched off writing pages without any idea of where the story was heading or how it would end. The whole thing is plenty of fun; but at the end, I still can’t figure it out.

It starts with Sonja finally reaching Venzia (which she’s been heading towards since Marvel Feature 6). The first thing she sees when she’s in sight of its famous canal is two trading ships crashing into one another and sinking. Even though the ships are less a minute’s swim from shore on either side of the canal, none of the sailors survive the crash.

Sonja doesn’t really have time to consider this mystery before she happens upon a woman being attacked by three bandits. She easily kills the trio in less than a page, but a fourth bandit, hiding in the shadows, knocks her unconscious and drops her to an underground mirror maze. The mirrors mess with her head to the point where she first hallucinates herself as a withered old woman (rendered only a little hilarious by the fact that she’s still wearing the chain mail bikini), then watches as her arms transform into snakes that begin to strangle her. Realizing that it’s an illusion, Sonja calms down and lets her mind “go limp,” at which point a passage out of the maze opens up. She leaves the maze and walks into the plot of the story.

An old man (who is never named) lies dying on the ground and explains that the underground chamber is the prison for an evil wizard (also unnamed) who wants to rule the world. Apparently, the chamber is also the prison of a demon (once again, unnamed) who can only be freed by a human hand. But not any human hand (otherwise, his cell-mate the evil wizard would just free him). The demon can only be freed by a human of exceptionally strong will (translation: the evil wizard is a wimp). The demon created the mirror maze as a test: anyone with a will strong enough to see through its illusions would have a will strong enough to free the demon. The fact that the maze is littered with bones implies that a lot of other women have been trapped down here.

How do we know they’re women? Because the old dying man tells Sonja that whoever successfully maneuvers through the maze is destined to become the demon’s “queen” and the Comics Code isn’t that progressive just yet. In addition to needing a “queen,” the demon also needs the “heart of an ancient holy creature” (you guessed it, also unnamed) that is being shipped to Venzia. And that’s why two trading ships crashed into eachother on page two: the old man suspected that one of them might be carrying the heart, so he used his magic powers to cause them both to sink, killing every man aboard. Because the dying man is a good guy, apparently.

But neither of the ships was carrying the heart, so the old man will just continue smashing every ship that comes to Venzia until the heart is lost or he dies. Of course, if he can’t tell what ship is carrying the heart, it seems like he wouldn’t know when he gets the right one, but that’s only one plot hole in our Swiss cheese narrative.

And, yeah, this plotline is much much more complicated than is necessary. “Red Sonja finds an evil wizard trying to set a demon free and kills him” would have sufficed. Oh well.

Sonja really doesn’t want to be a demon’s “queen” and is planning to leave when the old dying man hands her an empty pouch and tells her to fill it with a bone from each of the skeletons she finds in the maze. When she throws the bones at the wizard, she’ll have the power of an army. Why the old man didn’t gather the bones himself and fight the wizard, instead of sinking ships full of innocent sailors, is never explained. And Red Sonja doesn’t really seem to care that much either, because she’s off picking bones like breadcrumbs until she reaches the unbelievably plush prison cell of the evil wizard.

So, there’s a fight. Red Sonja throws the bones, which transform into an army of skeleton soldiers. The evil wizard summons a horde of demons. And it’s basically CGI vs. stop-motion animation as demon fights skeleton. Sonja advances on the evil wizard, ready to stab him in the traditional Red Sonja fashion, when he summons a blood-drinking bat to slay her. That works about as well as you can imagine and, one panel later, the wizard’s dead.

Which leaves Sonja with the demon, who has transformed himself into a handsome underwear model and enchants our heroine into approaching him. It looks as if Red Sonja is going to have the life drained out of her when the old man manages to sink a third trading vessel, this one containing the heart. The heart isn’t destroyed, but apparently just sinking into the canal is enough to cause the demon pain, giving Sonja the opportunity to run him through with her sword.

She leaves the dead wizard and dead demon to find that the old dying man who guided her there … is feeling much better, thank you. He’s up and around and ready to leave. Maybe he was under a curse that broke when the evil wizard died; but I’m guessing he was just faking so that Sonja could go and kill the wizard for him. Lazy old man.

Red Sonja and the old man leave the underground chamber, as well as leaving us, the readers, with so many questions.

What did I just read? Who’s the editor who approved this mess (none is listed in the credits)? Why exactly was the wizard trapped if he was powerful enough to summon demon swarms and command an above-ground criminal network?

We will never learn the answers to these questions. All we do know is that, by issue three, Red Sonja is way the hell away from Venzia and hopefully has no intention of ever returning there again.

Next Week: Red Sonja Hasn’t Been Thrown In A Gladiator Pit Yet? Well, Let’s Fix That Right Now.