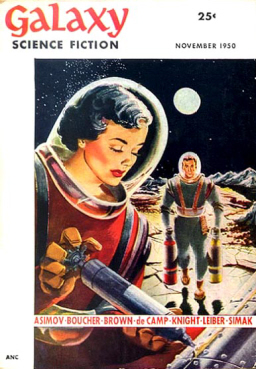 I’m slowly making my way through my collection of Galaxy Science Fiction, continuing with the second issue, dated November 1950.

“Honeymoon in Hell” by Fredric Brown: In the futuristic year of 1962, due to some unknown cause, all of Earth’s babies are born as females. With their own ideas running out, the U.S. government turns to Junior – the largest cybernetic computer in the nation. The computer hypothesizes there could be something local to the planet causing the issue.

It suggests testing the theory by sending married couples to the moon – to see if conception in a different environment would produce males. The government chooses Ray Carmody, a former rocket pilot who was one of the few people ever to land on the moon.

To Carmody’s dismay, the U.S. teams up with Russia for the first of multiple missions, and he is married remotely to Anna Borisovna, also a rocket pilot. They land separately in Hell Crater and begin assembling a shelter, but their work is interrupted by unexpected arrivals.

This is a story that gives away its age with numerous details, but it moves along really well. It’s an interesting idea, and I liked how the plot unfolded.

“Forgotten Missionary” by Isaac Asimov: Humans land on Saybrook’s Planet, taking caution to establish a barrier between themselves and the indigenous species. Because they must. The previous explorers, under Saybrook’s guidance, found that the planet was like a single organism, and it wanted to add new species to its body. Given the opportunity, the planet’s organisms could impregnate other species, which would later birth scions with green patches of fur where their eyes should be.

When the barrier fails for a brief moment, one of the planet’s organisms sneaks aboard, disguising itself as part of the ship. Its mission is to wait until it encounters the humans’ home world before affecting all other specimens of life – otherwise, the humans would simply destroy themselves as their first explorers had.

This was more of the kind of story I was hoping for from Asimov (I was a bit disappointed by his contribution in the October, 1950 issue). A nice premise with a great ending.

“Transfer Point” by Anthony Boucher: Three people escape mankind’s extinction – a brilliant scientist with a less-than-brilliant daughter, and Vyrko. Vyrko lacks a scientific mind, but spends his time recording mankind’s demise, and reading the pulps of an age long past. Within these pulps, he finds stories about himself, leading him to a discovery that could completely change his circumstances – or trap him forever.

Anthony Boucher was the co-founder of Fantasy & Science Fiction (along with J. Francis McComas), editing the magazine from 1949 to 1958. I find it interesting that he was also a writer. In fact, Galaxy’s editor, H. L. Gold, also wrote fiction. Perhaps this was commonplace at the time, but it’s not something I often see in our field today.

“Coming Attraction” by Fritz Leiber: A British man saves a woman’s life in a post-H-bomb New York City (renamed Inferno). Like all American women, the victim wears a mask, creating added mystery for the protagonist when she flees the scene. The two meet again, and she seeks his help in escaping to England, but he soon learns that she’s hiding more than her visage.

“To Serve Man” by Damon Knight: I saw this in the table of contents and thought, “Wait. That’s one of my favorite Twilight Zone episodes.” Given the date of the magazine, I knew this had to be the episode’s origin.

Reprinted numerous times (and used as a basis for that unforgettable Twilight Zone episode), Knight’s story is about the arrival of the Kanamit. The aliens offer practically everything to mankind – world peace, an end to starvation, and unlimited power – and their stated reward is to bring peace and plenty to the Earth. So what could be wrong with that?

I think there are perhaps two people who haven’t seen this Twilight Zone episode, so if either of you happen to read this review, go watch it now. It has one of the greatest twist endings of all time.

I like that the short story ends with the zinger, whereas the screenplay adds on to it. Personally, I would rather the screenplay end with the main character entering the ship without the epilog. Because then the final words would have matched the end to the short story. You know what I’m talking about: “It’s a ____!!!” 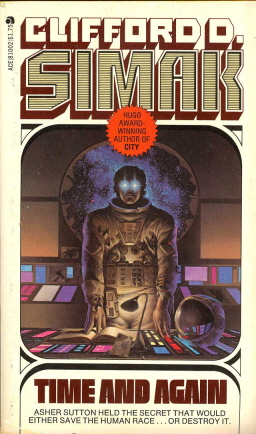 “Time Quarry” by Clifford D. Simak: This is part 2 of the serial, following the adventures of Asher Sutton, who recently returned from 61 Cygni – a journey that no other person has ever (or will ever) make. Sutton inherits an asteroid after winning a duel, and he’s escorted there by an android and a woman.

Both are insistent that he work on a book – a book that reveals what he has learned about life from his trip to Cygni. His revelation is that mankind is no greater than any other life-form, including androids. Because of this, a future war erupts between those who agree either in part or whole and those who want to erase Sutton’s ideas.

And since the future war involves time travel, it is a war fought on four dimensions, with careful alterations to history that each side hopes to use to their advantage. But the most decisive point in history is Sutton’s book, so that is the point on which they converge.

It seems like H. L. Gold was fond of zingers with the stories he published – unexpected endings that evoke gasps from readers. I don’t see that as much with modern short stories. Perhaps it became overused (or perceived as overused by editors), but I think audiences would enjoy more stories like this. Not that everything must have a twist, necessarily, but I like finishing a story and having to just sit and think for a moment afterwards.

Read Matt’s review of the premiere issue of Galaxy here.

Actually most of SF’s best editors either started out as writers or in some cases they continued to write on the side as they continued to work as an editor. John W. Campbell, Gold, Boucher, Fred Pohl, Damon Knight, Lester Del Rey, and Donald Wolheim among others were all writers of note before they became editors. Some like Pohl and Knight would continue to do both before finally returning to writing fulltime. Anthony Boucher actually had a duel career as an important editor and book critic in the mystery field. To this day one of the main mystery conventions is caller the Bouchercon.

Good information, Randy. Thanks for sharing!

[…] Simak – This is the conclusion to Simak’s three-part novel. (I have already reviewed Part 1 and Part 2). Asher Sutton becomes stranded in the late twentieth century, and for a decade, he trains himself […]