First, I want to point everyone to a book giveaway at Reddit. Until the end of the week, you can drop by, write what your favorite fantasy setting, world, or culture is (and why) and be entered in a drawing to win a signed copy of both The Bones of the Old Ones and its standalone predecessor, The Desert of Souls.

Second, I thought I’d take a moment to talk about what a book launch week is like. Long time visitors to Black Gate may remember that I promised to take you with me  as I crossed over from regular bloke side of the street to man with a book contract side.

If you peruse the articles I wrote about signing my book deal with the St. Martin’s Thomas Dunne Books imprint, my glee practically drips off the screen (1. How to Get a Book Deal. 2. Signing the Contract. 3.  After the Book Deal). Finally, after decades of trying, my words were going to be in a real live (well, dead tree) book, in bookstores nationwide. I felt like Charlie at the end of Charlie and the Chocolate Factory, when Willy Wonka asks him what happened to the boy who got everything he wanted. “He lived happily ever after,” says Willy with a smile.

It turns out that when you actually get through that door, what you’re doing is becoming an artist who is also a small business owner, for one of the things you absolutely must do is promote your work, er, product. There is a lot of work, and not so much chocolate. I got pretty busy, and I forgot to tell everyone here at Black Gate what was going on.

There is an astonishing amount of white noise out there, and it is very hard to break through it and get noticed. All kinds of books are getting released all the time — not to mention movies and video games. Even if a book gets great reviews, it doesn’t mean that readers are going to SEE those reviews. Or they might see the reviews, but never find the book in a bookstore.

Honestly, it’s hard to know what happens out there, so if you’re wanting to make a career of writing, you do all sorts of things that you hope will help get the word out about your book. Your product. See, I still have a hard time thinking like a business guy. 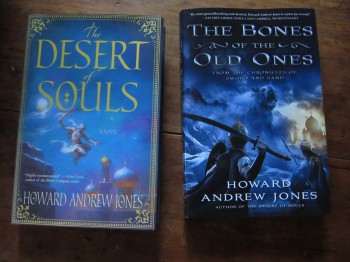 Obviously, the first thing you have to do is to write the best book you can. Sometimes bad products DO sell; but, really, I think most of us writers out here want to give every book our all. I wouldn’t be doing this if I didn’t love telling stories.  Anyway, so write a good book. Once your product is in place, you have to promote it, which I barely understood the first time. After I’d gotten some experience promoting The Desert of Souls, I had a much better idea about what to do, promotion wise, for The Bones of the Old Ones. This week may be launch week, but I’ve been gearing up for it for almost half the year. I’ll quickly share a few of the steps.

I think one of my least favorite parts of promotion is pestering other authors whom you respect to give up their time to read your book… and hopefully blurb and promote it. It’s made doubly awkward if you really like their work, but they haven’t heard of yours — which is nine times out of ten when you’re a newbie author. Every author I’ve contacted has been gracious, even when they’ve said no, probably because they all remember what it’s like being the newbie. It doesn’t change the fact that you’re asking a stranger for the favor of their time, which feels pretty awkward.

While you’re writing authors, you’re also contacting everyone you can think of who runs a blog, or a podcast, and politely asking them if they’re looking for some extra essays or if they’re curious about having you on their show. It’s a lot like making a cold sales call, which I never much enjoyed even though I’m pretty outgoing for an introvert. Fortunately, after the release of Desert, I had become friendly with a number of podcasters and bloggers, and it is always simpler contacting a friend or friendly acquaintance than making that first foray into the unknown.

Anyway, so I wrote a lot of contact letters and guest essays. I completely revamped my web site, with a little bit of help from several sources. I drew up a more extensive list of review sites and brainstormed with my publisher. I drove all over my community so my daughter could stuff mailboxes with flyers about my upcoming book reading and signing. I even had a few wilder ideas in the pipeline that got put on hold when my mom got very sick in the two months right before the launch. I’ll probably try those next time, so mum’s the word.

Now it’s almost time to step back with fingers crossed and see what happens. So far, the reviews have been good: a starred review from Publisher’s Weekly, enthusiastically positive reviews from BookPage and Staffer’s Book Review, and two 4.5 (out of 5) star reviews from SF Signal (here and here). Will the reviews that follow be as good, and, probably more important, will sales follow these reviews? Will people READ these reviews and act upon them?

There’s not too much more I can do about it.  Oh, I’ll hope to get on a few more podcasts, but at a certain point I have to let go of it all, take off the business man’s hat, and get back to the art half of the equation.

So what is book launch week like? It’s wonderful seeing my book in print, which is something I’ve dreamed and worked toward for more than half of my life. Here I am holding the third of my professionally published books. That feels pretty good. More than anything, I want a career of this and the not-knowing whether sales figures will be good enough to keep me here for the long term can drive me crazy, but I stop sometimes to remind myself how lucky I am, and how long it took for me to get here, and how it would not have been possible without the support and encouragement of friends, loved ones, teachers, and even complete strangers who know nothing about me but who like the stories I tell.

I’ll try to do a better job of keeping everyone up to date about this whole writing life. I’m going to log off, write a few more guest blog posts, and get back to outlining and drafting the next books.

Howard Andrew Jones is the author of the historical fantasy novels The Desert of Souls, and The Bones of the Old Ones, as well as the related short story collection The Waters of Eternity, and the Paizo Pathfinder novel Plague of Shadows. You can keep up with him at his website, www.howardandrewjones.com, and keep up with him on Twitter or follow his occasional meanderings on Facebook.

This is great, Howard. Very helpful. I like the penultimate paragraph particularly.

I’ve really enjoyed this series. It’s a valuable insight for anyone who is thinking about publishing.

Daran, I’m glad you’re enjoying them. I’d like to think what I’ve experienced will be of use to other writers.