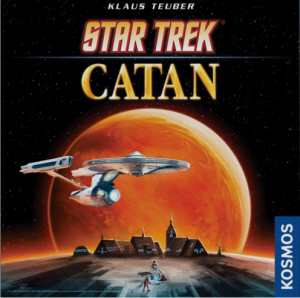 We’ve been on something of a Star Trek kick recently, and I see no reason to change that now. So when I stumbled on this article at UK news publication The Observer, echoing many of the comments in my recent post on The Paris Fashion Week of Fantasy Games on the ongoing surge of high-profile SF and fantasy board games, I was delighted to see that the game used to illustrate it was the new Star Trek Catan from Kosmos/ Mayfair Games. Based on the worldwide hit Settlers of Catan, it looks like it offers plenty of Federation action to tide fans over until the May release of Star Trek Into Darkness.

The article itself is worth a read. Here’s a snippet.

Before video games (bear with me here, kids) – and as impossibly archaic as it might sound – there were “board” games: things made with card and glue that required imagination and literal, rather than virtual, interaction… it’s worth noting that the modern video-games market actually owes much to these board games. Visit any video games development studio and you’re likely to spot shelves piled high with colorful boxes sporting unfamiliar names, used for inspiration and lessons in good game design.

If you’re looking for a holiday gift for that gamer in your life, I included more than a few in our recent Christmas Gift List.

But there’s lots more to be found — check out our recent Games posts, for a start. Or just make a trip to your local games store. And hurry — this is the new Golden Age of tabletop gaming, and you don’t want to miss it.

Unfortunately I never left the age of board games — they left me. Playing any number of them by one’s self grows stale rather soon and is easily supplanted by other endeavors. I just discovered a Marvel superhero board game for 1-5 players though…and that ‘1’ has been calling to me in my dreams.

I was very disappointed in Star Trek Catan. They don’t sell any expansions for it. My groups Catan games now cover most of a banquet table–STC looks rather puny in comparison.

Also Tribbles aren’t a resource. I was really looking forward to got wood, need Tribbble jokes.

> Playing any number of them by one’s self grows stale rather soon and is easily supplanted by other endeavors.

Know what you mean. We just need to convince Howard Andrew Jones to drive up to Chicago for another Heroscape marathon at E.E. Knight’s — those games were EPIC. Best board gaming I’ve done in years.

> I just discovered a Marvel superhero board game for 1-5 players though… and that ‘1′ has been calling to me in my dreams.

Really? How did I miss that? Or did you literally dream it?

> My groups Catan games now cover most of a banquet table – STC looks rather puny in comparison.

Well, one step at a time, Dan. It took a while for the first expansions for Catan to be released as well, as I recall. STAR TREK CATAN has only been out for a few months!

It’s amazing how boardgames have taken off in the last 3 years.

Jason and John I think every boardgamer has the problem of no one to play with. The solution I found was to find good two player games. Games like Summoner Wars by Plaid Hat Games. Or War of the Ring by Ares games.

[…] The Observer on Why Board Games are Making a Comeback […]