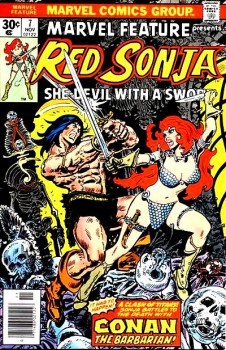 So the next issue blurb at the end of Marvel Feature 6 was just a bit misleading. After you went back to the comic shop (or newsstand or drug store or wherever people went in 1976 to get comics), paid your thirty cents for Conan the Barbarian 66, and got the issue back home, you would discover that it wasn’t a continuation of the story from Marvel Feature 6 at all. No, “Daggers and Death-Gods!” instead told the story of Conan and Belit docking in Massantia to trade some “honest loot, freely plundered.” After some tense negotiating, they are told of a missing page from the Book of Skelos being kept in the Temple of a Thousand Gods. There’s a hefty reward being offered by an unknown client (who works through a middleman) to anyone who can steal the page from the temple. Conan and Belit make their way through the temple and, after nearly killing eachother, thanks to a caretaker’s spell, they find the page … and Red Sonja. So issue 66 actually tells a story parallel to the one we just finished, with the promise that the next part will, for real this time, be told in issue 67.

Well, we’ve already invested sixty cents into this story, so we might as well invest another thirty to find out where it ends. Issue 67 opens with four pages of re-caps to the stories we read in Marvel Feature 6 and Conan the Barbarian 66. After the recaps, Sonja and Belit have exactly one panel of dialogue before Belit draws her sword and tries to kill her. Red Sonja called her a serving wench and that was all it took because, as Belit is fond of reminding us, she’s actually the daughter of the death-goddess Derketa (Belit believes this because Belit is crazy). The fight lasts for three panels before Belit concedes that Red Sonja is a better swordswoman and throws her sword aside. But she hasn’t conceded the fight, only changed weapons. Apparently, Belit (like all crazy girlfriends) carries a knife. At this point, Red Sonja probably realizes that Conan has enough problems with his delusional knife-wielding girlfriend, so she opts instead to grab the page, slice through the torch that lights the chamber, then flee under cover of darkness. Because Red Sonja only has crazy delusions of grandeur after watching her entire family murdered. For Belit, it’s a lifestyle.

The rest of the issue is Conan promising Belit that he’ll track down Sonja and the page, then getting sidetracked when he discovers an old friend has been imprisoned for murdering one of the town guard (which he’s done so many times, you’d think he’d be surprised to find that some people actually get arrested for it). After killing a half-man/half-tiger (honestly, no one’s even surprised by this sort of thing any more), he frees his friend and discovers that he was locked in the cell next to the man who originally stole the page (small world, Roy Thomas, awfully small world). He meets back up with Belit and they take in this new bit of information just as Red Sonja races past them on horseback. We’re told that the story will be continued in Marvel Feature 7.

Seriously? Ninety cents and two of the three issues barely have any Red Sonja in them. Now, of course, we’re at that point of no return. We’re almost out a whole dollar and, of course, have to know how this all wraps up. At least the next issue is in Red Sonja’s book again.

So Marvel Feature 7 opens with Red Sonja almost trampling Conan and Belit as she rides out of Messantia with the page. The two guest stars make chase, but are stopped by a rockslide, courtesy of Karanthes’s magic. Sonja arrives at the temple of Ibis and hands over the page, asking for her payment. Before paying her, the priest points out a chamber of skulls, where the bones of former priests are kept. He warns her that anyone disturbing the chamber will meet a fearsome guardian (almost as if he’s foreshadowing a future plot development). Since Sonja has no interest in the bones, the priest then proceeds to pay her.

Yes. Red Sonja is going to get paid for once in this series. The priest says he’s going to pay her. He walks over to a treasure chest where the jewels are kept. Sonja’s no doubt imagining how nice it will be to sleep indoors again –

Then Conan bursts in through the ceiling, demanding the page.

And that’s it. Red Sonja totally loses it, draws her sword, and fights Conan the Barbarian. OK, this is worth the buck-twenty. Because Conan is the stronger and more skilled swordsman, but Red Sonja fights dirty (well, dirtier). Each passes up a chance to deliver a killing blow to the other and the fight eventually finds its way into the chamber of skulls, where they proceed to desecrate the remains of a hundred priests.

At this point, they both discover that the guardian of the chamber of skulls is a giant snake. Since Conan and Red Sonja practically had their first date fighting a giant snake, they immediately forget their fight with eachother and team up to make short work of it. At this point, Sonja decides the jewel isn’t worth all the fighting and decides to split the reward with Conan instead. Of course, since this would mean an end to the senseless violence, at that moment, a giant bat with a human head breaks into the temple of Ibis. We’re told that the face belongs to a priest of Set and that the conclusion to this story will be in Conan the Barbarian 68.

At this point, I’ve seen Conan and Red Sonja fight eachother, then team up to fight a giant snake. I’m thus mollified enough to invest another thirty cents in this story to see where else Roy Thomas will take us.

It begins with Conan and Red Sonja failing to stop the half-man/half-bat from grabbing the page and flying away. So they go in pursuit and run into Belit, who spends another half-page threatening to kill Red Sonja before all three join forces to catch the monster, retrieve the page, and hopefully split a reward three ways. They discover that the creature has fled to a fort in the middle of the wasteland that they’re all certain was not there earlier (the fort wasn’t there earlier, not the wasteland).

Approaching the fort, they’re taken prisoner by none other than Kull, yet another Robert E. Howard creation. It seems that Kull (and his entire fort, complete with army) was summoned from the distant past by the priest of Set just to distract Sonja, Conan, and Belit. It works. Conan and Kull get into a sword-fight that neither man wins and, eventually, Conan sends Kull back to his own time by shooting the priest with an arrow. Of course, in the melee, the page catches fire and burns to nothing.

So the three of them return to the Karanthes, who tries to cut them a break by offering another job. If they could travel to Stygia and retrieve the rest of the Book of Skelos from the City of Sorcerors …

To which all three essentially say, “Screw that,” and go on their separate ways. There’s a nice moment where Sonja explains to Belit that she’s worked with Conan in the past, but they’ve never been lovers. She further elaborates that no man has ever been her lover and Belit apparently jumps to her own conclusions because after that, the death threats stop. The ending suggests that Conan is perhaps more conflicted about his feelings than Red Sonja, but he sticks with Belit (at least until Roy Thomas adapts “Queen of the Black Coast” in Conan the Barbarian 100). And Red Sonja rides off, once again not a penny richer for the experience.

But after seven issues in Marvel Feature and numerous guest appearances in Conan’s books, Red Sonja was finally judged worthy of her own series and would next appear in the much-anticipated Red Sonja 1.

As much as I loved these comics back in the day, and as much as I find myself applying a rosy patina of nostalgia to my memory of them today, I recall being a bit non-plussed by the appearance of Kull in this sprawling tale. Seemed like the author was dragging characters in by their heels. Why not toss in Bran Mak Morn and Solomon Kane for an extra groovy Marvel Team-Up?

I love these posts. The wry, blunt descriptions of the stories drives home just how absurd much of my entertainment of choice was back when I was a shaggy-headed stripling. Thanks.

Frankly, comics used to be fun without being stupid. It’s sad that so few of the modern titles hold up to that standard.

Glad you enjoy the posts, John. And funny you should mention Marvel Team-Up …

Ohhh, I have a fractured memory of Claremont’s erratic run on Marvel Team-Up featuring a Red Sonja appearance… you’re going to make me relive that, aren’t you??

And google has just informed me there was a follow-up mini-series.