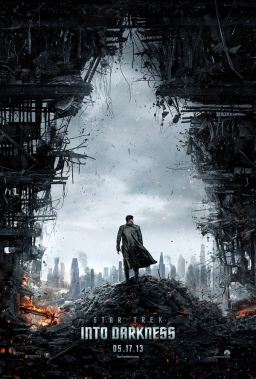 Just to review, Black Gate is a website with a laser-like focus on the best in new and neglected fantasy. If you want science fiction, there’s plenty of other places for that. Except maybe for Star Trek, because that has William Shatner and we’re big fans.

Now that we’ve cleared that up, I’d like to point you to the just-released poster for the upcoming Star Trek Into Darkness, featuring a trenchcoat-clad badass standing on a mound of rubble that used to be Federation stuff, starting at other Federation stuff he could also knock over. Just to drive home the point, his profile forms part of a crumbling Federation emblem (click the image at right for a bigger version).

That’s one cool poster. It’s also done absolutely nothing to dampen ongoing speculation that the villain this time is none other than Gary Mitchell, Kirk’s friend and helmsman who became all glow-eyed and megalomanical after slamming into the edge of the galaxy at warp 3 in “Where No Man Has Gone Before.” Neither has the film’s official description:

When the crew of the Enterprise is called back home, they find an unstoppable force of terror from within their own organization has detonated the fleet and everything it stands for, leaving our world in a state of crisis. With a personal score to settle, Captain Kirk leads a manhunt to a war-zone world to capture a one man weapon of mass destruction.

As our heroes are propelled into an epic chess game of life and death, love will be challenged, friendships will be torn apart, and sacrifices must be made for the only family Kirk has left: his crew.

For the record, I think this is a great choice. “Where No Man Has Gone Before” was the second pilot and one of the show’s earliest episodes, and frankly one of its best. And if the poster and teaser description are any indication, the action this time won’t take place on a remote planetoid covered in giant styrofoam rocks, but a populated center where the stakes are a lot higher and the explosions a lot bigger. Finally, as reported some time ago, Sherlock actor Benedict Cumberbatch has been cast as the film’s villain, and I think he’d make a magnificent Gary Mitchell, both as a jovial lieutenant commander and as an all-powerful psychic loonie.

Star Trek Into Darkness is directed by J. J. Abrams, and written by Alex Kurtzman, Damon Lindelof and Roberto Orci. It is the twelfth feature-length Star Trek film and the sequel to 2009’s Star Trek. It is set for release on May 17, 2013.

Well, you’ve picked two good ones to start with. 🙂

Although to round out your STAR TREK experience, I suggest you also watch the original series episodes “The Doomsday Machine” and “Devil in the Dark.” And maybe the 7th movie.

I appreciate the recommendations. I really enjoyed the Abrams film and wanted to hunt down more star trek. But as you know there is so much of it. So i figured i would look and see if my library had the first original series episodes. Where better to start than the beginning right? They had the first two episodes of the original series and some of the later episodes from that era. But i never bothered to hunt down anymore. I enjoyed the first two episodes though

Netflix streaming has a huge amount of Star Trek, including the remastered original series.

Mind you, I’ll readily cop to being an original series purist. What can I say? I grew up with it. So if pushed for the best Trek experience, I’d say go for the old series — “Doomsday Machine” and “Devil in the Dark” are really good, and off the top of my head I’ll throw in “City on the Edge of Forever,” “Trouble With Tribbles,” “Amok Time,” “Errand of Mercy,” really any number of others but let’s say “Journey to Babel” — and then watch movies 2, 3, and 4, which take that crew when they’re older and put them through a genuinely moving set of stories about aging and renewal. You can watch the movies on their own, but they gain a lot I think by having seen the original show and being familiar with the crew as actual adventurers, knowing a bit of their history before you see what becomes of them.

Not sure how relevant it is, but the city in the poster is London.

I really enjoy the second movie, but if I could only pick one, it would be STAR TREK: FIRST ENCOUNTER, in which the Enterprise faces a truly terrifying opponent in the Borg.

> if pushed for the best Trek experience, I’d say go for the old series… and then watch movies 2, 3, and 4,
> which take that crew when they’re older and put them through a genuinely moving set of stories about aging and renewal.

Well said. Indeed, if you’ve got the time to make a Netflix order or three, that’s probably the way to go.

> Not sure how relevant it is, but the city in the poster is London.

Sharp eyes, Joe! Indeed it is.

Fine selection of episodes selected by Mr. Surridge up there. The Doomsday Machine might be the purest expression of space opera yet seen in a TV show.

But no matter how good Bumderdink Cumberbunch (what, is the guy a hobbit?) may be in the role of Uber-Scary Federation-Despoiler Rex, the guy needs a new teaser writer.

Detonated everything the fleet stands for!? The fiend has somehow contrived to detonate the ideals of an entire interstellar civilzation! Now that is some serious villainy.

I remember thinking at the time that Gary Mitchell was destroyed far too easily. Really good episode though. I loved the Gateway concept in “The City on the Edge of Forever.”
I’ve followed Star Trek through its many incarnations and found each one had good entertainment. Really enjoyed the latest version by J J Abrams. One of the best lines in that movie is “You got it.” I’m looking forward to the new one. Thanks John for highlighting it.
BB

Star Trek – In the Dark of Night | Astrographer

[…] Gary Mitchell, though that has since been revised to, “villain.” That idea has had some play around the […]

[…] for the Voldemort/Darth Vader position. In fact, I had to agree with a comment by Barbara Barett here that for what he was Gary Mitchell was removed as a threat far too easily. That’s […]

[…] we reported back in December, speculation has been rampant around just whom Benedict Cumberbatch will be playing in the new […]