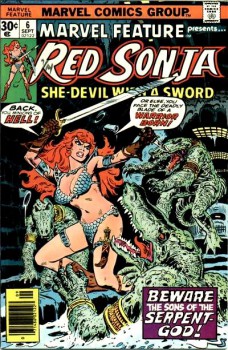 So this issue touches on a pretty sensitive topic for me: book vandalism. Working in libraries, on and off, for most of my adult life, I’ve had to deal with this problem over and over. Some people just swipe whatever reference page they want, rather than using a photocopier. After all, why pay a dime for your own copy when you can steal the information from generations to come for free? Some people just don’t like the fact that certain information is freely available to the public and take it upon themselves to censor library materials. For instance, every single copy of Our Bodies, Ourselves had pages ripped out (and if you guessed they were in the chapter on women’s sexuality, you understand the mind of a censor). Some people just want to write down a phone number or a grocery list and rip out the page of a book that they don’t see any value in. Honestly, write it on the back of a receipt.

Anyway … Red Sonja spends the first four pages of Marvel Feature 6 beheading a pair of jackal-men, which is not much different than any other typical afternoon for her. But when she runs across Karanthes, a priest of Ibis, he explains that those weren’t just two run-of-the-mill half-man/half-jackal bandits, but special agents sent by a priest of Set to kill Sonja before she could meet Karanthes. It seems that Set and Ibis are two gods locked in an endless struggle with one another (Edith Hamilton says different, but that’s neither here nor there) and the priests essentially carry out their struggle on the earthly plane. Karanthes wants to hire Red Sonja to retrieve a document that he believes will help tip the struggle in his god’s favor.

So our mystic doodad of the month is a page torn from the Book of Skelos. We’re told that the Book of Skelos “contains the most fearsome magic-lore on Earth,” although frankly that gets said about a lot of books (including Our Bodies, Ourselves, apparently). While the book is closely guarded, apparently someone managed to tear out one of its pages and make off with it. Now, we never find out what’s on this page, if it contains a spell or a table of contents or just a dedication. (“To my wife, Sheb Niggurath, my most ruthless critic, my most tireless supporter, my everything. I love you, forever.”) And Red Sonja doesn’t really care either, as long as she gets paid.

Taking a lesson from Savage Sword of Conan 1 and Marvel Feature 5, she makes certain that the client has the money up-front. And sure enough, this priest just happens to be carrying a massive jewel with him. So Sonja’s off to Messantia to break into the House of Relics, where the page is being kept. For some insane reason, she decides that the best way to break into the House is to sneak in through the sewers.

So Red Sonja wades through a “repellant rainbow” of human waste and assorted garbage. In a bikini. It was a big jewel, but still … I’d have at least worn pants.

And the Sons of Set are right behind her. This time, the priest decides to mutate three of his human agents into half-crocodile/half-men, which makes sense since they’re going into a sewer. But not just any crocodile. He uses a baby crocodile “born in the swamps far south and sent north to be a child’s plaything.” On the next page, we are told the fate of many such creatures, “how crocodiles, raised as children’s pets, have been discarded as they grew larger, into the city’s sewers, so that now – blind, albino-colored, and weaned on a diet of filth – they roam these foul streams in search of stray rats and, on occasion, even larger prey.”

That’s right, this issue, Red Sonja fights albino alligators (or crocodiles). After several pages of stabbing one through the heart, throwing one into a whirlpool of death, and finally jamming a dagger through the skull of a third, she’s ready to move on. She finds a stairway leading up to the chamber where the page is being kept.

And maybe it’s worth pausing for a moment to wonder why a page from the Book of Skelos is being kept next to the sewer entrance. I’m assuming this is where the maintenance staff to the House of Relics throws out the garbage, so does that mean they pass this page every day while taking out the trash? Is it implying that the House of Relics is full of such cool stuff that they post a page from a pre-Atlantean book of magic in the same spot where my grandmother posted her “Bless this Mess” needlepoint?

Regardless, Red Sonja pushes open the door to find the page on a display stand. Unfortunately, she also finds her old friend, Conan, ready to steal the page for himself. And standing in the background, sword drawn, is Conan’s crazy-ass girlfriend, Belit, Goddess-Queen of the Black Corsairs. At this point, Red Sonja is ready to fight Conan and Belit (whom she’s never even met before) to the death in order to take the page for herself. Again, it was a really big jewel.

Running through sewers with a sword, handling book vandals, dealing with crazy girlfriends … it’s like Roy Thomas was writing about my college years. And it ends with the note that the story is continued in Conan the Barbarian 66, which means you had to buy an extra title that month if you wanted to read the rest of the story. Which means you’d have to go back to the comic store the day after buying this issue, like some kind of junkie no longer able to go a week between fixes. Nursing a comic book addiction … it really is just like my college years.

Those may be the funniest observations I’ve ever read about Our Bodies, Ourselves. My brain wants to produce a punchline about Red Sonja reading that book, but nothing comes up. Ah, well. Maybe it’s best as a visual.

I have to say — this was one of the funniest things I’ve read in the last few weeks.

I loved the description of Belit as Conan’s crazy-ass girlfriend, and the whole bit with the dedication and “our bodies ourselves” cracked me up.

Well, now this one I DO have, nestled into my Conan comic collection right between #65 and #66. Back then I was pleased with this crossover because I thought too many of the comic stories featuring Conan were too short at an issue or two.

Roy Thomas did consistently enjoyable work on Conan and Red Sonja. He managed to spin engaging yarns packed with action, tributes to REH and his fellow Weird Tales authors, and salted with the sort of winks of humor we see in the crocodile backstory here. And he did this every month for ten years.

I’ve heard modern readers call his work dated, and having been written for Marvel in the 1970’s under the eye of the Comics Code, perhaps this is true, but it is still a remarkable achievement.