There’s an amazing Kickstarter running at the moment. If you’re a fan of world-building, if you want to check out a world that’s been built over more than 40 years of group endeavour, with deep myths, histories, and cultures, one of the most compelling worlds in fantasy and certainly in fantasy roleplaying, you may want to take a look.

I’ve written previously at Black Gate about Glorantha, the fantasy world invented by Greg Stafford which lies behind the roleplaying games RuneQuest and HeroQuest. It’s a gorgeously detailed world; back in the days when Dungeons & Dragons was all about faux-medieval Tolkienery, Glorantha emerged as a lavish fantasy analog to the ancient world of Greece, Persia, and Rome. It’s a world of centaurs, heroes in bronze-crested helms, giants as big as mountains, and arcane cults which reshape the world as their worshippers offer sacrifice. Rich, complex, and sophisticated, it can offer the lightest play styles, or a rich immersive shared storytelling experience, with as much detail as anyone could want. 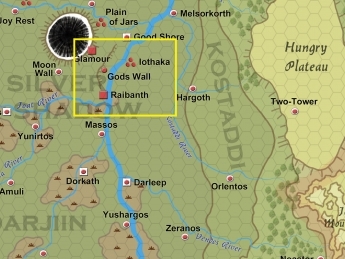 Glorantha owes a lot to Joseph Campbell, too. The “hero path” is an integral part of the world – how its inhabitants relate to the very real (and often mercurial) gods which surround them, and how heroes can penetrate the timeless realms of the gods and return with treasures physical and mystical. If, like me, you’re interested in the transcendent aspects of the stories we tell one another, Glorantha is a compelling world.

I’ve been gaming there since 1980; parts of it I feel I know better than my own hometown. But, over the past few years, Glorantha has entered a new golden age, as under the leadership of Jeff Richard and Rick Meints, Moon Design Publications have released multiple very high quality books providing new and deeper detail to the world. I’ve written about Sartar, Kingdom of Heroes; the Sartar Companion; and Pavis, Gateway to Adventure in previous posts – they’re all well worth a look, and highly recommended. 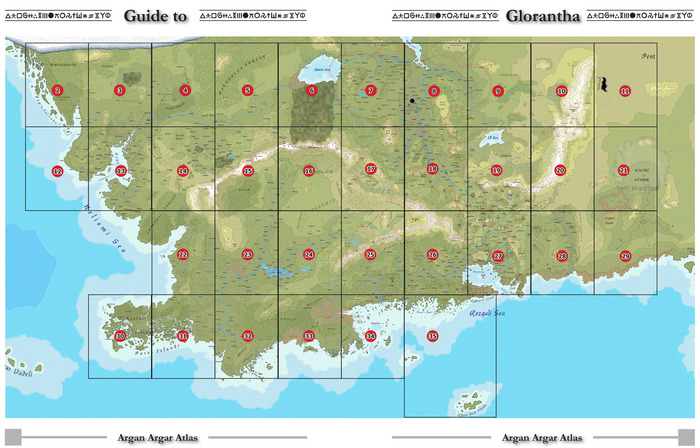 Over the past few years, Jeff Richard has been working on a book which looks like it will set a new standard in RPG supplements – a guide to the whole world of Glorantha itself. It’s a massive undertaking – an encyclopaedic opus detailing the places and cultures of a whole fantasy world, in exquisite detail. It’s been attempted twice before – once in the 1980s and once a decade ago – but in relatively abbreviated form. The new Guide to Glorantha is anything but abbreviated: it comes in at a whopping 400 pages of 10″ x 12″ book, detailing the geography, history, and cosmology of Glorantha, its cultures and races, as well as two continents, two subcontinents, and multiple archipelagos, plus a massive atlas filled with highly detailed and gorgeous maps – over 64 pages worth at the last count. The Guide to Glorantha is system agnostic – it doesn’t contain any games mechanics content, it’s pure setting detail, so you can use it with any game ruleset, or just read it for the pure pleasure of it. The Kickstarter has been running for a little over a week, and already has blown through its initial target. As a result, the initial scope of the project has expanded hugely, so that we’re now getting more regions detailed, more maps added, and an entire new “Companion” to the guide detailing things like the geography of the mythic regions of Glorantha, plus monographs by key industry writers. For those of us who’ve been playing quests into the realms of myth, this is nothing short of breathtaking in its ambition.

Check it out. If you’re a fan of Glorantha, or of fantasy worlds, or just want to see a beautiful example of world-building, the Guide to Glorantha may be for you. The Kickstarter runs until Tuesday, 18th December, and features a flexible pledging scale and increasingly attractive rewards.

Yeah, I backed this a few minutes after I discovered it a few days ago. 🙂

[…] The Guide to Glorantha Kickstarter […]