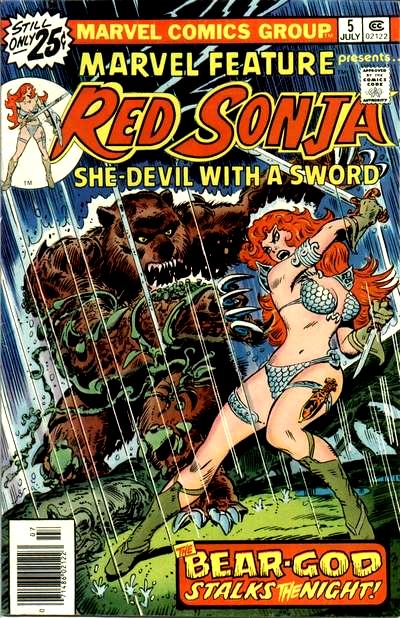 I just realized something curious about Red Sonja. I mean, besides the chain mail bikini and vow never to (kiss/have sex with/love) a man who hasn’t defeated her in battle. After a dozen issues, I’ve never seen this woman get paid for anything. All the demons and wizards and brigands she takes down, yet no one’s ever paid her a shekel for her services. Honestly, why keep doing it if no one pays her?

Maybe she thinks if she kills enough evil wizards for free, word of mouth will spread and someone will offer her a paying gig as wizard-slayer. Maybe she’s working as an unpaid intern to gain experience in wizard-killing before pursuing a career in that field. Maybe she’s working for store credit, getting discounts on her weapons and bikinis in exchange for showcasing a metalsmith’s product line.

Of course, word of mouth, internships, and store credit are stupid reasons for unpaid labor; but it’s fantasy, so let’s run with it. After all, she’s a gorgeous redhead in a chain mail bikini. How else is she going to make a living? So when she sees a sign offering 1,000 gold pieces for slaying a forest beast, she’s in.

She finds herself accompanied by Tusan, a fellow bounty hunter who’s far more interested in “getting to know her” than slaying an evil bear god (seriously, it’s a giant bear). But he’s got money, so Sonja allows him to take her to a tavern for a few drinks.

Frankly, with the vow she’s taken, I can’t understand why Sonja doesn’t mooch more free dinner dates off men than she does. A little wine, fine food, good music, then back to her place for a night-cap where she breaks the news, “Oh yeah, baby, I forgot to mention, before you get to second base, you have to defeat me in combat.” Seriously, haven’t we all gone on dates like that?

Of course, Tusan gets fair warning in the kind of woman he’s wooing when Sonja starts a bar fight for the sheer hell of it. They flee the tavern and camp out in the wilderness where the bear god is rumored to dwell. Of course, Tusan has only packed one tent (and one blanket), so they have to make do with tight quarters. He doesn’t even realize that his life is spared when a blood-curdling scream outside the tent distracts him from trying to seduce (and then likely be eviscerated by) Sonja. Before going off to face the bear god, they exchange a brief kiss (The Red Sonja Kiss of Death) and learn the awful truth.

And I’m not kidding, they discover that the forest beast is just a guy in a bear costume scaring the townspeople into pooling all of their money together to hire a bounty hunter to slay it. The mayor and the guy in the bear costume then kill the bounty hunter, tell the townspeople that the beast has been slain, and split the money between the two of them. And they would have gotten away with it too, if it wasn’t for that meddling redhead.

Curiously, Tusan is able to kiss Red Sonja without dying horribly on the next page, which makes the vow look like it’s either about abstaining from sex or love. He makes one final pass at her on the last page and gets shot down in one of the best comebacks you’re likely to read for the “baby, it’s cold outside” argument.

Of course, since it was all a scam, Red Sonja once again doesn’t get paid for her work. She does meet a nice guy with money who’s hopelessly smitten with her and doesn’t seem to mind the verbal/physical abuse she dishes out on him; but Sonja’s not going to be a kept woman. So next issue will be the further adventures of a she-devil with a sword who needs a job.

How did I get hooked on a series of summaries of a 40-year old comic? I don’t know, but I am.

It almost sounds like they commissioned the covers first, and then the stories.

Mike, I’m curious when this issue originally appeared. You think you could add that?

wait… there are comics? How many were there? Comics are not really on my radar.

“Seriously, haven’t we all gone on dates like that?”

What? I feel like I need a separate editorial just to deal with that assertion.

ONeill, you missed out on AWESOME short story take on the red sonja theme by monsieur Penkas at the last TSB open mic.

John, The cover date is July 1976. Usually, comics came out two or three months before the cover date.

Commissioning the covers first, then telling the writers to build stories around them was actually an old DC trick. Look at the covers to Superman’s Pal, Jimmy Olsen or Superman’s Girlfriend, Lois Lane and that’s what was going on every issue.

Raptor (if that is your real name), Red Sonja appeared in something like a dozen issues of Conan the Barbarian before graduating to seven issues of Marvel Feature (essentially an audition book), then fifteen issues of her own self-titled series.

Mike — thanks, but I meant add the date to the post (and to future posts). It seems odd that the pub date is never even mentioned.