I rarely read introductory volumes of fantasy series these days. Truthfully, I don’t pay much attention to them. What I do pay attention to is the final volume, as that’s (usually) a sign it’s safe to sit down and enjoy a complete fantasy adventure. That’s why I was very pleased to see Legacy of Kings, the final volume of C.S. Friedman’s Magister Trilogy, arrive in paperback in September. It is the sequel to Feast of Souls and Wings of Wrath. 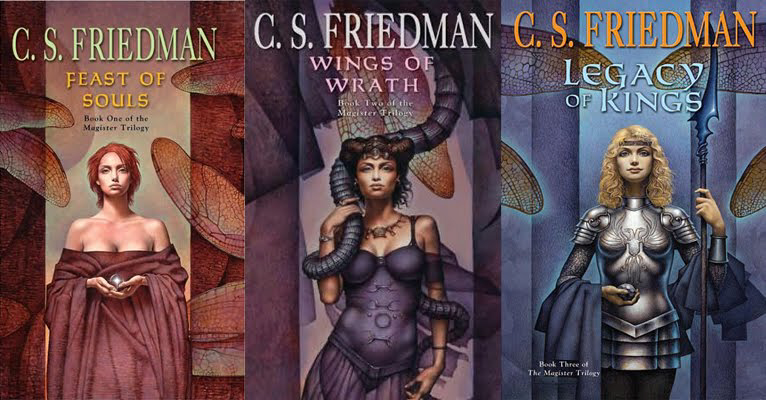 I’ve followed Friedman since she published her first novel, In Conquest Born, in 1986. She is the author of The Coldfire Trilogy, the Braxi/Azea duology (In Conquest Born, The Wilding), and the standalone novels The Madness Season and This Alien Shore. Kings was originally released in hardcover in August 2011; the captivating cover sequence for the trilogy is by John Jude Palencar.

The young peasant woman Kamala has proven strong and determined enough to claim the most powerful Magister sorcery for herself — but now the Magisters hunt her for killing one of their own. Her only hope of survival lies in the northern Protectorates, where spells are warped by a curse called the Wrath that even the Magisters fear. Originally intended to protect the lands of men from creatures known only as souleaters, the Wrath appears to be weakening — and the threat of this ancient enemy is once more falling across the land.

Legacy of Kings was published by DAW Books in September, 2012. It is 498 pages, and priced at $7.99 for both the paperback and digital versions.

Oh, This Alien Shore! That’s where I’d seen C.S. Friedman’s name before. A delightful science fiction adventure, that one. Okay, now I’ll have to check out this newly finished trilogy.

Excellent! If you finish it before I do, I’d love to hear your thoughts.