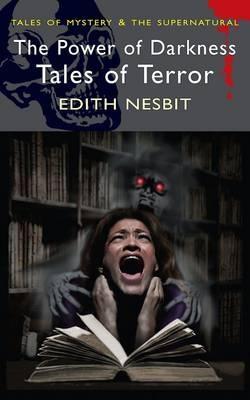 Yes, we’re talking here about Edith Nesbit, godmother of British fantasy and beloved author of The Enchanted Castle, Five Children and It, The Phoenix and the Carpet, and many others children’s classics. This is not some other Edith Nesbit. Right there on the back of my copy of the Wordsworth Edition paperback of The Power of Darkness — Tales of Terror are the words:

Edith Nesbit, best known as the author of The Railway Children and other children’s classics, was also the mistress of the ghost story and tales of terror.

Who knew? Not me. I thought it was scandalous when JK Rowling wrote a book with sex in it, but that’s nothing compared to the head-twisting British schoolkids must have received opening their copy of The Power of Darkness — Tales of Terror.

And what’s with the two titles? It’s like she couldn’t decide what to call it. “The Power of Darkness or Tales of Terror? Bloody Hell, I’ll call it both.” You tell ’em, Edith!

As an unanticipated side-effect of my gross ignorance of early 20th Century supernatural short fiction, I am surprised and delighted by this addition to the Wordsworth Tales of Mystery And The Supernatural imprint (or, as we like to call it, TOMAToS). But the rest of the line has been extremely impressive, so I’m willing to believe they’re not just pulling my leg with this one. Here’s the rest of the back cover copy, just to prove I’m not making this up:

‘The figure of my wife came in… it came straight towards the bed… its wide eyes were open and looked at me with love unspeakable.’

Edith Nesbit was able to create genuinely chilling narratives in which the returning dead feature strongly. Sadly, these stories have been neglected for many years, but now, at last, they are back in print. In this wonderful collection of eerie, flesh-creeping yarns, we encounter love that transcends the grave, reanimated corpses, vampiric vines, vengeful ghosts and other dark delights to make you feel fearful. These vintage spooky stories, tinged with horror, are told in a bold, forthright manner that makes them seem as fresh and unsettling as today’s headlines.

Vampiric vines! I’m putting this one right at the top of my to-be-read pile.

This was the first of the Tales of Mystery And The Supernatural I’ve highlighted in Vintage Treasures, but it wasn’t the last. Dozens of authors are featured in this excellent series, from William Hope Hodgson to Elizabeth Gaskell to Robert E. Howard, and the books are smartly packaged and inexpensive. It’s a great way to assemble a library of classic English fantasy and horror.

The Power of Darkness — Tales of Terror by Edith Nesbit, edited and with an introduction by David Stuart Davies, was published by Wordsworth Editions in 2006. It is 255 pages in paperback, priced at $6.99. There is no digital edition, and really, I think a digital edition of a ghost story book kinda defeats the point anyway.

Elizabeth Gaskell wrote fantasy and horror? How did I not know that? Okay, clearly I need a bushel of TOMAToS.

She did indeed. The volume in question is Tales of Mystery & Macabre, selling for just $6.99:

Penguin Classics also has a 416-page volume of her ghost stories, GOTHIC TALES, although this one is a little more expensive:

I bought them both, and don’t regret it. 🙂

Love Nesbitt’s children’s books, am currently in the midst of Phoenix and the Carpet with my eight-year-old. I had no idea she wrote straight up horror (no doubt highly gothic and downright Victorian). Now I know what I want for Xmas! Thanks for posting this.

You’re most welcome. My daughter is now 13, and will no longer sit still for Edith Nesbit. She reads a lot of books with vampires on the cover these days…

[…] weeks ago I mentioned The Power of Darkness: Tales of Terror, by Edith Nesbit, a volume in the Wordsworth Tales of […]

[…] The Supernatural series we’ve covered here, after The Beast with Five Fingers by W.F. Harvey, The Power of Darkness — Tales of Terror, by Edith Nesbit, and Alice and Claude Askew’s Aylmer Vance, The Ghost-Seer. There’s […]

[…] Vintage Treasures: The Power of Darkness — Tales of Terror […]