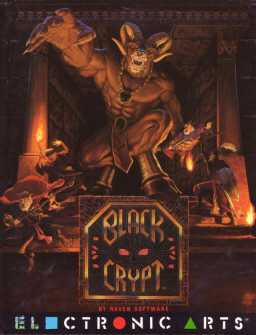 Some 20 years ago, shortly after I graduated from the University of Illinois, I bought my first home computer. It was an Amiga 2000, essentially the same as the entry-level Amiga 500 but with a hard drive. The hobby computing industry — which is now dead — was booming in the early 90s, and there were thousands of fun things the dedicated hobbyist could do with a decent home computer. Video editing, BASIC programming, ray trace imaging, indexing Chicken Cacciatore recipes… and if you were cutting edge enough to buy a modem, you could even log into BITNET and post on those electronic bulletin boards everyone was talking about. Crazy.

All of that was very interesting. But I shelled out my $1,500 bucks for one reason, and one reason only: to play games. And that’s exactly what I did.

I played the role playing games I’d been aching to try out in my last year of grad school, while feverishly finishing my Ph.D. thesis: Pool of Radiance, Bard’s Tale, Dragon Wars, many others. I played late into the night, before dragging my weary butt into work at Amoco Oil the next morning. It was an exhausting and emotionally draining lifestyle but, let’s face it, those dungeons weren’t going to clean themselves out. Countless terrified townspeople in tiny electronic villages were counting on me, and I wasn’t going to let them down.

About a year after I bought my Amiga, in March 1992, Electronic Arts published one of the most acclaimed role playing games ever made for that platform: Black Crypt, the first release from Raven Software, future makers of the popular Hexen, Soldier of Fortune, Quake 4, and Call of Duty: Modern Warware 3. Inspired by the legendary game Dungeon Master, another famous Amiga title, Black Crypt was nothing less than a vast trap-filled dungeon crammed with monsters, secret passages, hidden switches, and magical loot. The graphics were gorgeous, and the wonderful sound effects — the distant clanking of trapdoors, odd footsteps, and telltale sounds of the teleporters — immersed players like never before, and made you want to play with the sound cranked up and the lights turned down low.

I played the first few levels and was mesmerized. Then, in November 1992, I got married and moved to Belgium, leaving my beloved Amiga behind. I thought about the game many times in the intervening years, as I returned to the States, got a job at a tiny software company, worked on Internet Explorer 1.0, and was at ground zero of the Internet revolution that transformed the entire country. Some time during those turbulent years, my Amiga was moved to the basement, where it quietly sits today, collecting dust.

In the last few weeks, I’ve been on a quest to find and complete Black Crypt. It’s a quest filled with exactly the kind of twists and turns you’d expect for a man determined to find a long-lost crypt, spoken of only in half-forgotten legend. While critics raved, Black Crypt was released when the Amiga was already in decline, and was never successful enough to be ported to any other platform. It vanished quickly, both from store shelves and collective memory. As I search for the right magical tools that will allow me to open the crypt, I’m well aware that it’s not going to be easy.

But that’s okay. After twenty years, one of the things I’ve learned is that true joy isn’t always in the destination. It’s in the journey.

Our most recent Vintage Bits articles were Sword of Aragon, Lordlings of Yore, and Battletech: The Crescent Hawk’s Inception.

Impressive boxes, Amigas. I had a roommate with one. He didn’t have any RPGs, but he had what is still my favorite Battletech game. It was responsible for me learning to mouse with my left hand due to too much playing incapacitating my right.

I also have fond memories of Projectyle, a rather innovative three-player hockey-like sports game from The Eldritch Cat.

> but he had what is still my favorite Battletech game.

That had to be BattleTech: The Crescent Hawk’s Inception, from Infocom.

Another fabulous Amiga game, which was eventually ported to the IBM PC. It even had an IBM sequel, BattleTech: The Crescent Hawk’s Revenge.

Sigh. Haven’t thought about those games in years. They’re worth a post of their own, no doubt.

> also have fond memories of Projectyle, a rather innovative three-player hockey-like sports game

I remember Projectyle! Another Electronic Arts game, if I remember correctly. I never played it, but it looked like fun.

The first I heard of Amiga, my roommate came back from a group programming session at a project-mate’s apartment. They had been working on an Amiga, and the background display was the World Series game in progress. I forget whether he had a tuner in it or was grabbing a feed from external hardware, but that was 1987.

[…] The most recent Vintage Bits titles we covered here were Lordlings of Yore, Sword of Aragon, and Black Crypt. […]

[…] most recent Vintage Bits articles were Sword of Aragon, Black Crypt, and Battletech: The Crescent Hawk’s […]

[…] most recent Vintage Bits articles were Black Crypt,  Lordlings of Yore, and Battletech: The Crescent Hawk’s […]