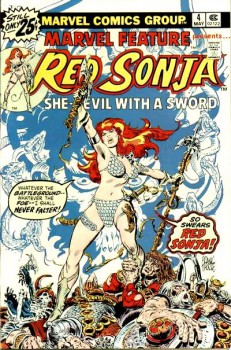 Before the story, let’s just look over that cover. It’s a parody of a couple famous Frank Frazetta paintings of Conan, down to the swooning male clutching at her leg. Axe raised defiantly in the air, she cries, “Whatever the battleground, whatever the foe, I shall never falter. So swears Red Sonja!” And the eye naturally focuses on the pile of corpses at her feet, almost missing the outline of this issue’s foe in the background. A defiant pose, a pile of corpses, a looming supernatural threat that consumes the entire background … this is what got kids to pluck down a quarter back in 1976. And the chain mail bikini didn’t hurt.

This issue starts, as so many Red Sonja stories do, with the Hyrkanian swordswoman trying to get a drink. She rides into a village that’s seemingly abandoned, save for the statues seated in the tavern. Of course, the townspeople are merely hiding from a gorgon (except for the ones who’ve been turned into statues already) and once they determine that Sonja is responsible for their troubles (based on the fact that she’s a stranger, apparently), they quickly vote to hang her. (This isn’t the last time Red Sonja is sentenced to hanging, for those who want to keep score.)

By the time the villagers realize their mistake, Sonja’s been rescued by the village idiot, who steals a horse for her and sends her on her way. Of course, it says something about Sonja when she decides to head back to the village to investigate and even the village idiot tells her that’s a bad idea.

When she returns to the village, she finds that they’re burning a woman as a sacrifice to appease the gorgon that’s been turning them to stone. At this point, she draws her sword and tears through the villagers, angered at the cowardice of anyone who would sacrifice an innocent to appease the forces of darkness. It’s an interesting character note that Sonja didn’t go back to the village for revenge and only became violent when she saw they were hurting someone else. The fight is short-lived when the gorgon shows up (apparently to collect the sacrifice) and promptly turns Red Sonja to stone.

Or so it seems. In fact, it turns out that two of the villagers have been quietly drugging the others one by one, kidnapping them when they’re unconscious and replacing them with stone replicas so that no one suspects the originals have been abducted. Sonja finds half the village being held as slaves as she fights her own way to freedom.

That’s right, the supernatural creature in this one is just a woman in a gorgon mask. I love that Bruce Jones chooses to sidestep our expectations with a Scooby Doo plot.

The most baffling part is that she sets the villagers free, even after they tried killing her once and abandoned her twice. For good measure, they abandon her a third time after she’s freed them, leaving her to deal with the village idiot and an army of rats. The best part of the story is probably when Sonja stabs someone in the face with a rat.

Despite being labeled a she-devil, it seems like it actually takes quite a lot to make Red Sonja mad.