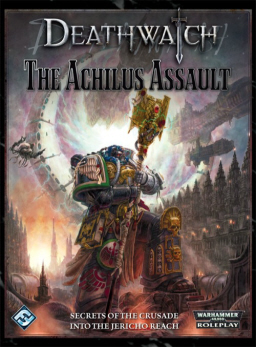 I’ve mentioned a few times now that the modern game that has most captured my interest is Fantasy Flight’s Rogue Trader, set in the darkly fascinating Warhammer 40,000 universe.

Let’s back up a bit, because that was probably confusing. What is Warhammer 40,000? Back in 1983, British game company Games Workshop released Warhammer, a tabletop miniatures game which allowed fantasy fans to simulate massive battles between orcs, elves, humans, and the forces of Chaos using thousands of hand-painted lead miniatures.

The game was a major success, and in 1987 wargaming designer Rick Priestley asked the fateful question: “Hey lads — what would happen if we gave orcs space suits?”

Thus was born Warhammer 40,000, a tabletop miniatures game which allowed fantasy fans to simulate massive battles between orks, elves, humans, and the forces of Chaos — in space. And yes, it’s exactly as cool as it sounds.

Of course, a concept as powerful as Orks in Space couldn’t be contained in one genre for long. The tabletop game is currently in its sixth edition, and by 1999 Games Workshop was publishing Warhammer 40K novels and comics through its Black Library imprint. Over the last dozen years, it has produced well over 200 titles, including The New York Times bestselling Horus Heresy series.

The novels have vastly expanded the far-future setting of Warhammer 40,000, filling in the back story of the all-powerful Emperor of Mankind, who sits on his throne on Earth while his Space Marines sweep across the vast reaches of the galaxy, reclaiming the far-flung worlds of man lost in the dark millennia since the treasonous forces of Chaos brought an end to the Golden Age of Mankind. The loyal Marines — and the Rogue Traders who follow closely behind, powerful merchant princes of the stars — come face to face with strange mutant offshoots of humanity, ancient and sinister alien Xenos, gene-stealing Tyranids, and whole civilizations fallen to the corruption of Chaos.

And of course, space Orks. 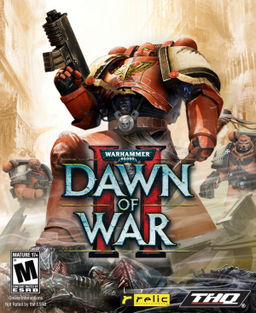 In some ways the novels have surpassed the success of the tabletop game, bringing in thousands of new readers and capturing the imagination of fantasy fans of all kinds. A setting as richly gothic as this — in which the forces of mankind are vastly outnumbered by mutants and hostile aliens, and supernatural terrors lurk in the dark between the stars — has attracted some very talented writers, including Dan Abnett, William King, Nathan Long, Graham McNeill, Andy Smillie, Sandy Mitchell, C.L. Werner, and many others, and they have done some really impressive work.

My first real exposure to Warhammer 40K was the Dawn of War computer game, which kept me up late into the night, hunched over my desktop, guiding Brother Captain Gabriel Angelos and his loyal band of Blood Raven Space Marines through a series of increasingly dangerous missions on the distant planet Tartarus, investigating a growing Ork threat, the subtle machinations of the Eldar, and eventually the evil forces of Chaos.

The game was terrific fun, but the highlight for me was the detailed future history, with tantalizing hints of a darkly fascinating and astonishingly ambitious narrative. That was all the impetus I needed to explore the novels, and eventually the tabletop game.

In 2007, Fantasy Flight, one of the most successful and innovative companies in the adventure hobby industry today, took a license to the Warhammer 40K universe — allowing them to produce pen-and-paper role playing games set in the same vast universe made popular by an extended family of tabletop miniatures, licensed novels, and computer and video games. 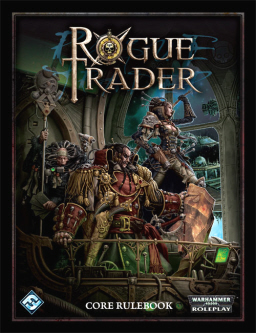 The result was an A+ line-up of some of the best-written and most thoroughly playable role playing games of the last decade. Their shared setting and history is perhaps their greatest strength, as it draws on the seemingly limitless imaginations of the Black Library writers and the designers at Games Workshop, and the terrific work they’ve done over the last two decades.

Fantasy Flight’s first release was Dark Heresy (2008), in which players take the part of Acolytes working for an Inquisitor; it was followed by Rogue Trader (2009), allowing players to play intrepid merchant princes buying and selling outside the legal boundaries of the Imperium, and Black Crusade (2011), which introduced Chaos-corrupted characters.

None of these games, however, allowed players to take on the role of perhaps the most iconic characters in the Warhammer 40K universe: Space Marines, the elite soldiers of the immortal Emperor and the most revered and respected warriors in the galaxy.

Which brings us, at last, to the Deathwatch role playing game, first released in 2010.

In Deathwatch, players take on the the role of Space Marines. And not just any Space Marine, but members of the legendary Deathwatch chapter, chartered with seeking out vile alien races on forbidden worlds and taking on the most dangerous of missions.

I have yet to try Deathwatch — what little gaming time I do have these days is taken up by Rogue Trader — but one of the most compelling aspects of these linked games is that their shared universe makes each volume wholly relevant to owners of the any of the sister games. So the sourcebooks and adventure campaigns for Dark Heresy, Black Crusade, and Deathwatch are very useful to Rogue Trader players, and vice versa. 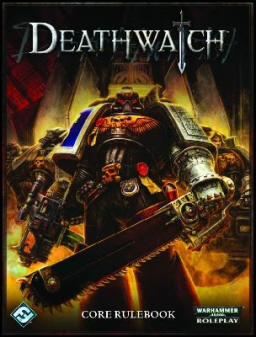 Fantasy Flight is supporting all four games with an aggressive schedule of supplemental books. One of the latest releases is The Achilus Assault, a lengthy campaign designed for Deathwatch players which also makes fascinating reading for owners of the other games — or really, anyone who enjoys excellent writing and a well-designed science fiction setting.

It details the Jericho Reach, a thick cluster of lost worlds on the periphery of the Imperium:

The setting for the Deathwatch RPG is a massive war front — the Achilus Crusade — sweeping across the lost worlds of the Jericho Reach. The front lines of this interstellar conflict are a great backdrop for the adventures of the Deathwatch Space Marines battling alongside the Crusade forces, and The Achilus Assault is a brand-new sourcebook that brings all of this into focus for a Deathwatch campaign. The Achilus Assault provides detailed descriptions for some of the Jericho Reach’s most significant planets and warzones to allow players and GMs alike to plan new Deathwatch Missions.

The Achilus Assault is a guide to the fires of war raging in the Jericho Reach, from the numberless tides of the Tyranids in Hive Fleet Dagon to the hellish legions of Chaos pouring forth from the Hadex Anomaly and the expansionist aggression of the Tau Empire. The threats presented in this tome provide Game Masters with a surfeit of antagonists and mysteries to confront a Deathwatch Kill-team.

Players can learn about the Jericho Reach’s most significant warzones and plan new Deathwatch missions of vital importance to the Crusade. Learn about the major threats to the Crusade’s advance, including foes that can be reasoned with and those that must be annihilated. With new NPCs, adventure seeds, and player options, The Achilus Assault brings your campaign to the front lines.

There you have it — the modern phenomenon of Warhammer 40,000 summed up in 1,200 words. If any of what I’ve said sounds intriguing, I hope you’ll give it a try. For adventure fantasy fans, Warhammer 40K in all its forms — tabletop games, books, and computer and video games — is the gift that keeps on giving.

The Achilus Assault was published by Fantasy Flight in September, 2011. It is 144 pages in hardcover, with full color, and is priced at $39.95.

This may get me purged with fire (BURN THE HERETIC!) but while I love the WH40K setting, the thing that bothers me is that they have this vast sprawling galaxy full of wonders and terrors and way too much of the content seems to boil down to Space Marines vs. Space Orks (with the occasional Chaos Marine thrown in to spice things up a bit). I suppose that’s at least partially because of WH40K’s origin as tabletop miniature rules.

That’s why I was so intrigued by Rogue Trader — a WH40K setting that’s not just about FOR THE EMPEROR! I just wish we’d get more of that kind of thing in the novels. (Are there any current novels that move outside of the Space Marine paradigm?)

> they have this vast sprawling galaxy full of wonders and terrors and way too much of the content seems to boil down to Space Marines vs. Space Orks…
> I suppose that’s at least partially because of WH40K’s origin as tabletop miniature rules.

Fair cop, if you’re talking about the general marketing. Although really, it’s a role-playing-game, so if your sessions have mostly been about shooting orks with your bolt pistol, you should have a talk with your Game Master.

The setting is rife for possibilities for thoughtful, experienced gamers who want to spend their time unraveling ancient mysteries and facing down unspeakable horrors from before the Age of Man, or hunting for profit among the scattered communities of a war-torn sector… like every RPG, the game is really shaped by the players.

> Are there any current novels that move outside of the Space Marine paradigm?

and also Sandy Mitchell’s Ciaphas Cain. He’s sort of a Flashman figure among the Inquisition — someone who keeps trying to keep his head down and cherry pick the easy assignments, and inevitably finds himself in the worst possible situations. There are two ombinus collections out, start with this one:

The tales of the Mechanicum are also a lot of fun:

That should do to get you started!

Thanks! Conveniently, I already have the Eisenhorn omnibus — must move it closer to the top of the stack.

Whoops! I somehow managed to mix up Eisenhorn and Ciaphas Cain. I’ve corrected my post above, but if you’re looking for Flashman-style light action in the Eisenhorn books, I have DEFINITELY led you astray.

Try DEAD IN THE WATER, a very fun little audio tale you can listen to in about an hour.

[…] week I wrote a brief introduction to the Warhammer 40K universe, under the guise of a review of The Achilus Assault gamebook. It was […]

[…] Explore the Horrors of the Jericho Reach in The Achilus Assault […]

[…] some of the most popular and acclaimed genre board games and RPGs of last decade, including Deathwatch, Descent: Journeys in the Dark, Dust Tactics, Merchant of Venus, Middle-Earth Quest, Relic, […]

[…] role playing games out there today, including the classic Traveller, Ashen Stars, and the marvelous Rogue Trader, but Outbreak: Deep Space has a very different emphasis than any of those. The focus isn’t on […]

[…] French, who has written for the Rogue Trader and Dark Heresy role playing games, sets out to answer that question with a trilogy of books that […]