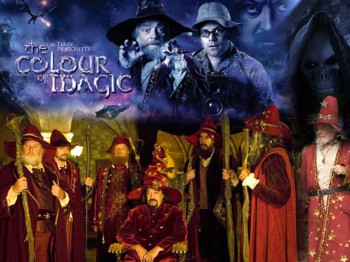 Once upon a very suspect time, a human being by the name of Terry Pratchett conjured up a space-traveling sea turtle by the name of A’tuin, and proceeded to make a sizable fortune from the disc-shaped world he emplaced upon her. In Pratchett’s Discworld novels, magic of the most unpredictable kind is the norm, and so it should come as no surprise that, eventually, somebody had to commit his unique brand of literary lunacy to celluloid.

And so they did. The Color of Magic appeared in 2008, destined for British TV and comprised of two longish episodes.

Now, having admittedly come rather late to the Discworld table –– I read a short called “Troll Bridge” years ago, but didn’t realize it was part of a larger cycle –– my somewhat limited exposure was nonetheless sufficient to convince me that Pratchett’s novels were congenitally unfilmable.

Despite that dire opinion, I am happy to report that Sean Astin is delightfully droll as Twoflower, the Discworld’s first tourist, and David Jason is about as Rincewind as anyone could possibly be. As a murderous and ambitious wizard, Tim Curry simpers and smirks as only Tim Curry can, (although he doesn’t appear to be having nearly as much fun as he did as “Arthur King” in Spamalot). On an ankle-biting budget, the cinematography is generally first rate, as are most, though not quite all, of the props. Death –– a nuisance, and constantly in pursuit of Rincewind –– is lovingly voiced by Christopher Lee, but disappoints the eye. Bearing a cheap-looking sickle, Death appears to have just wandered in from a middling haul of Trick-or-Treats.

Physically, then, in real-world terms, The Color of Magic is of course filmable –– as is just about everything these days, including massive sand worms and infinitesimal specks of pollen. I even recall seeing, on Nova, an attempt to demonstrate string theory’s ten dimensions on the two-dimensional plane of a television screen –– an abject failure, yes, but I blame myself. My limited powers of imagination and whatnot. Me and my four-dimensional mindset.

So let me amend my question: can The Color of Magic be adapted to film successfully?

On this score, I must still say “No.”

The issue isn’t technical. No, the real stumbling block is the style of the novel itself. How can one translate Pratchett’s actual words to dramatic form?

In print, the principal pleasure of the Discworld is its level of invention, and this inventionality (new word alert) might be divided into two parts, the first being the purely imaginative (A’Tuin) and the second syntactical (and here it might help to think of Douglas Adams at his least restrained).

For an example of Pratchett’s style, consider this passage, in which Rincewind, a linguistic genius in his own right, first meets Twoflower:

Rincewind switched from High Borogravian, to Vanglemesht, Sumtri and even Black Oroogu, the language with no nouns and only one adjective, which is obscene. Each was met with polite incomprehension. In desperation he tried heathen Trob, and the little man’s face split into a delighted grin.

“At Last!” he said. “My good sir! This is remarkable!” (Although in Trob the last word in fact became “a thing which may happen but once in the usable lifetime of a canoe hollowed diligently by ax and fire from the tallest diamondwood tree that grows in the noted diamondwood forests on the lower slopes of Mount Awayawa, home of the firegods or so it is said.”

Let us assume that the laws of Fair Use will allow one more Pratchettian dalliance, from much later in the book:

The sudden departure of several quintillion atoms from a universe that they had no right to be anyway caused a wild imbalance in the harmony of the Sum Totality which it tried frantically to retrieve, wiping out a number of subrealities in the process. Huge surges of raw magic boiled uncontrolled around the very foundations of the multiverse itself… 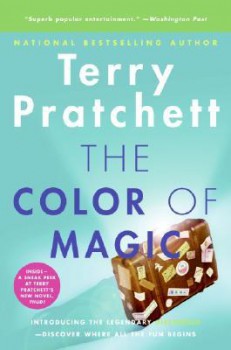 How to put these asides and intrusions into pictures? Can it even be done?

Intrusive narrators are notoriously difficult to translate to stage or screen. Consider Jane Austen, who regularly interrupts the flow of her stories to opine about manners, culture, or proper etiquette. One can certainly work around such interruptions in a script, but to simply cut them out is to translate the work piecemeal. You get the turkey, yes, but not all the trimmings.

And then there’s the storytelling itself.

In many ways, the oddest thing about Pratchett’s The Color of Magic is not the presence of see-through dragons, or a world where water constantly pours from its flat circumstance directly into deep space, but its close kinship to episodic novels, a form all but banished from the shelves of current fiction. Think Voltaire’s Candide or Cervantes’s Don Quixote, novels in which the dramatic stakes never really rise and the emotional journey of the characters is superficial, at best. TV sitcoms retain this style with some success; nobody in, say, Cheers ever really develops, and you know what? We wouldn’t want them to. The barflies of Cheers are stock characters, and they stay true to form forever and forever, no matter what life chucks in their path.

I do not claim to have read all of Pratchett’s novels, but certainly in The Color of Magic, the rule of the episodic holds true: the characters flit from one disaster to another, often with only a modicum of rhyme or reason. Why, for example, must Rincewind engage in mortal combat, upside down, with a Dragon Lady? Besides the fact that in the film, mostly aimed at male viewers, the Dragon Lady has a cute belly button?

It’s a fact that The Color of Magic (the film) does move well past the bounds of The Color of Magic (the book), and into The Light Fantastic. Thus Episode 2 does pick up a certain velocity, but never without all sorts of inexplicable left-hand turns, and Rincewind, being a sort of walking tabula rasa, remains a hero of essentially moment-to-moment aspirations.

But in episodic structures, there may not be a story at all, and if there is, it tends to read like a relative showing you their vacation slide-show: “And then, and then, and then…” 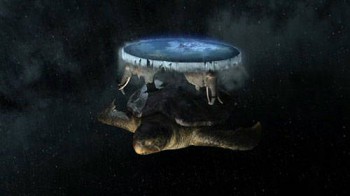 This works fine if you find your pleasures in the style of delivery. For example, crazy Uncle Vortigern delivers a much better slide show than uptight Cousin Bo, because Vortigern has a finely honed and self-deprecating sense of humor, no regard for any opinion but his own, and besides, he can narrate fluidly even while smashed out of his gourd. Poor Bo merely informs you of the exact location of each photo. “And then, and then, and then…”

This can work on the page, but in a dramatic setting? Snore.

Screenwriting 101 explains a dramatist’s methodology as follows: give your lead character a goal they simply must achieve, and then make sure there all sorts of roadblocks that prevent said character from achieving it. Think of our old friend Luke Skywalker. He wants to get out and see the universe, but he’s stuck where he is because of his various agricultural commitments. Then, once he does get a ticket out, there’s a princess to rescue––but Luke can’t possibly rescue her, because the Empire (led, as it turns out, by his own dastard of a father) wants to kill him. How will Luke persevere?

Novelists, unlike dramatists, have the advantage of being able to delve into the interior states of their creations. In so doing, they can sometimes eschew the “dramatics” of a scenario entirely and still produce a successful read. And yes, intrusive authors (bless ‘em, every one) are more apt to do this than most. Consider Pratchett’s Rincewind. If he has a goal, it seems to begin and end with saving his skin from whatever peril is at hand. So dramatically, he makes for a puzzling lead character; on screen, he’s hard to root for. Indeed, in some ways, I found myself cheering for Twoflower’s sapient (pearwood) luggage, which has a goal as clear as cut crystal: catch up with Twoflower at all costs and protect him, which is not easily done, since Twoflower attracts trouble like nobody’s business.

So what are we left with? A brave writer and equally brave screenwriters, doing their best to hook all comers with a world both fantastical and far-fetched.

As a novelist, Pratchett’s worldwide success demonstrates that he knows exactly what he’s about. But on film? Well, unless the Internet Movie Database is lying, The Color of Magic ceased production after its second episode (although, weirdly, “Troll Bridge” is slated to arrive in some capacity in 2013). Not that I’d ever grant public opinion the status of final arbiter on anything, but still. That’s pretty telling.

As the wise ones say, sometimes the book really is better.

A better film adaption of a Discworld book is Hogfather. The book is still better, of course, but I thought the film did a very good job of capturing the various characters.

I haven’t read any Pratchett. I enjoyed Hogfather, but stopped watching The Color of Magic about 45 minutes in. I wanted to like it, but it was boring me.

There was also a third Discworld adaptation: Going Postal. I think Colour of Magic is probably the weak link of the three; then again, I also kind of think that Colour of Magic was a relatively weak book — I don’t think Pratchett hit his stride in Discworld until maybe five or six books in.

(Don’t get me wrong — “relatively weak” Pratchett still blows the doors off of most other books, and at this point I think he’s one of the best and most consistently good authors out there.)

Going Postal is very good. Now that they’ve set Ankh Morpork with it’s quasi Victorian dress and buildings, they should stay there. The next one is supposed to be “Unseen Academicals;” which I’m looking forward to, but they need to do “Guards! Guards!”

I’m inclined to think all three of the movies are worth watching, but I”m comparing them to the cartoons from the 80’s, so my bar isn’t very high.

RRM and Jeff: I’ll have to check out Hogfather, thanks for suggesting that.

Joe: Pratchett, oddly, is one of the rare fantasy authors that gets real kudos from the literary establishment, notably A.S. Byatt, who gets quoted on a lot of Pratchett’s covers. And my own elitism shows here, yes? Because guess why I finally picked up a Discworld book. Yep, because of Byatt, whose “Angels and Insects” is one of my favorite novellas. Not a bad movie, either.

darangrissom: Discworld cartoons? Can you tell me more? I’m not familiar with those.

Great to hear from you all!

Soul Music and Wyrd Sisters were made into cartoons. Clips may be found on Youtube, and episodes are available from Netflix. They were not very good to begin with, and now have the added detriment of being rather dated.

These have all been on Netflix at various times, and I agree, Hogfather and Going Postal were both better in their on-screen versions than the Color of Magic.

[…] been all but dared, following my rather critical summation of The Color Of Magic (2008), to view a subsequent Pratchett adaptation, Hogfather (2006, made for […]