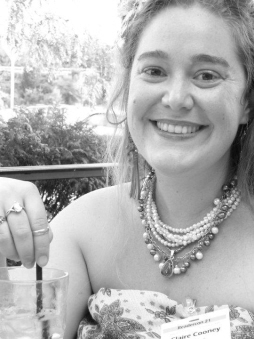 A young woman makes a dangerous journey across a fantastic desert landscape in a desperate attempt to save her childhood friend:

He heaped down beside me on the sharps of his knees and stared into the murky slime of the pool. “Do you have another lace?”

I felt him there beside me, all along my right side, every thin bone of him. Whenever he twitched, I expected him to rattle like verdy branches. I untied my other sandal and handed over the lace.

“Pretty much dead, yeah,” I agreed. “Buried down in Paupers’ Grave on the corner of B’ihbrid and Nilzi. I live with Great Aunt Irlingard who hates me.”

“I live with my father and sisters,” he said, “in my Mother’s house.”

After a pause, he added, “My Mother is eating my father. Very slowly.”

C.S.E. Cooney’s fiction has been reprinted in Rich Horton’s Year’s Best Science Fiction and Fantasy (2011 and 2012 editions). Her poems and short stories have appeared in Clockwork Phoenix 3, Apex, Subterranean, Strange Horizons, Podcastle, Pseudopod, Ideomancer, Goblin Fruit, and Mythic Delirium. Her collection How to Flirt in Faerieland and Other Wild Rhymes was released by Papaveria Press in May, and her fairytale-with-teeth novella, Jack o’ the Hills, was published by Papaveria in January. She was the recipient of the Rhysling Award in 2011 for “The Sea King’s Second Bride.”

“Godmother Lizard” is a complete 16,000-word novella of weird fantasy offered at no cost.

You know, Cap’t Asakiyume, I like a girl who says “faboosh” a lot! Thank you so kindly for reading!

[…] is a complete 10,000-word novelette of adventure fantasy offered at no cost. It is sequel to “Godmother Lizard,” which appeared here on Sunday, November 11th, 2012, and which Louis West at Tangent Online […]

Black Gate » Blog Archive » Tangent Online on “Life on the Sun”: “This One Captured a Piece of my Soul. Brilliant.”

[…] on the Sun” is the sequel to C.S.E.’s “Godmother Lizard,” which Tangent Online called “a delightful fantasy tale about an orphan girl… […]

[…] published a few here. Her novella “Godmother Lizard,” which Tangent Online called “a delightful fantasy… [it] entranced me from the […]

[…] published C.S.E. Cooney’s novella “Godmother Lizard,” which Tangent Online called “a delightful fantasy… [it] entranced me from the […]

[…] Gate‘s online fiction catalog, “Life On the Sun,” and its prequel, “Godmother Lizard.” For the following interview, she and I met in the cavernous vaults of Black Gate‘s […]

[…] stories to Black Gate, I had to peek between my fingers to read them. We published two, “Godmother Lizard” and “Life on the Sun,” (which Tangent Online called “bold and […]