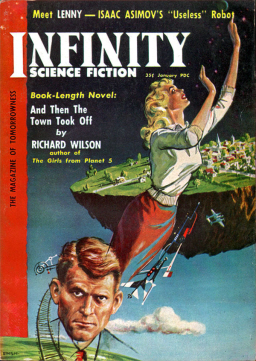 This is the fifth installment in Rich Horton’s retro-reviews of science fiction and fantasy digest magazines from the mid-20th Century. The first four were the February 1966 Analog, the December 1965 Galaxy, the January 1966 issue of The Magazine of Fantasy & Science Fiction, and If, October 1957.

The last magazine I reviewed came from October 1957, the month Sputnik was launched. This one is dated January 1958, and presumably appeared on stands a month or so after Sputnik, but was editorially complete just prior to the launch. And I’ve got another October 1957 issue coming.

So — these are, I would argue, three examples of SF magazines on the very cusp of the Space Age.

Infinity lasted from the end of 1955 through 1958, a total of 20 issues. It was published irregularly but roughly bimonthly. The editor throughout was Larry Shaw, and his work was justly very well regarded. The most famous story he published was Arthur C. Clarke’s “The Star” in the very first issue.

Shaw also edited the companion magazine, Science Fiction Adventures, which became the John Carnell-edited UK magazine by the same name (Carnell’s magazine started as a reprint edition of the US magazine, but continued with original stories after the US version folded). An earlier US magazine of that name was edited by Lester Del Rey pseudonymously, and the title was used again later for one of Sol Cohen’s horrid reprint magazines.

This issue had a cover by Ed Emshwiller, illustrating Richard Wilson’s serial “And Then the Town Took Off”, and interior illustrations by Emsh, Bill Bowman, Richard Kluga, and John Schoenherr. The only ads are the ubiquitous SFBC on the back cover (inside and out), and on the inside front cover an inhouse ad urging the reader to subscribe to Infinity and Science Fiction Adventures. 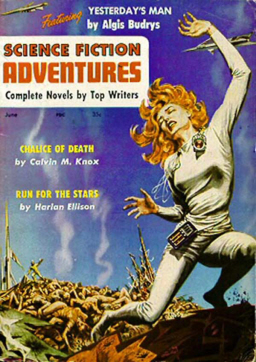 Features: an editorial column, By the Editor, called “Tomorrowness”, explaining why the magazine is now subtitled “The Magazine of Tomorrowness” — basically, some people are saying SF is dead, and Shaw suggests that old-style SF may be dying, but new styles continue to be born and thrive.

Robert Silverberg contributes a report on the recent Worldcon in London — this is a replacement for the usual Fanfare column, which reprinted worthy fanzine pieces.

The lettercol is called Feedback. I found it lively and interesting, mostly discussing two things: the stories in a recent issue, and Damon Knight’s book reviews — er, perhaps I should say, damon knight’s book reviews. Apparently a recent issue had included a letter from Art Coulter (Ann’s Dad, maybe?), complaining about knight’s vicious treatment of certain books. The writers this time around vigorously defended knight.

By the way, while damon knight often spelled his name that way at that time, especially in fanwriting, and the letter writers hew to this convention, his name is given as Damon Knight on the TOC. I didn’t offhand recognize any of the writers.

This outing was interesting. Knight reviews, first, Judith Merril’s SF:57: The Year’s Greatest Science Fiction and Fantasy. This was Merril’s second Best of the Year book. In Knight’s view, this collection does in fact include all but three of the best SF stories of the year, and she had excuses for the three she didn’t include (they were either chosen already for F&SF‘s annual anthology, or the author already had a story in Merril’s book. Although one story in The Best from F&SF, Sixth Series does also appear in the Merril book.) 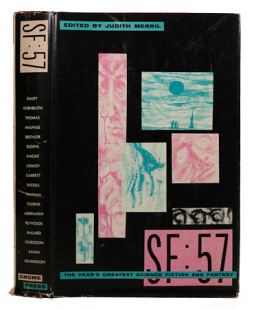 That’s good as far as it goes. The problem, in Knight’s view, is that this is only 6 stories — of only 9 truly worthwhile stories published in 1956 (in his view). (One of these 6 stories appears to be Knight’s own “Stranger Station” — I agree with Knight’s approbation for his story, which clearly was one of the best of 1956.)

Then Knight writes: “It may be that science fiction, which looks so flourishing, is coming to the end of its cycle.” He goes on to note that 12 of the 15 stories in the book are essentially depressing, or downbeat (including his own).

(Indeed he adds: “I have been writing gloomy stories for years, in a reaction against the silly convention that ruled in the magazines when I was a pup, that all stories must have happy endings. But I think a convention of gloom is just as silly as the opposite one, and you may expect me to turn optimist just as soon as I can retool for it.)

Knight’s favorite stories from the anthology, by the way, besides “Stranger Station,” were Algis Budrys’s “Silent Brother,” Mack Reynolds’s “Compounded Interest,” J. G. Ballard (who he compares to the “vanished Venard McLaughlin” — who he?) with “Prima Belladonna,” Theodore Sturgeon’s “The Other Man,” and Zenna Henderson’s “The Anything Box.”

(It turns out that Venard McLaughlin published a couple of stories in the SF magazines in the ’40s, and several stories in literary magazines. Based on the description someone gave of the one SF story that was later reprinted [“The Silence”, in separate anthologies by Don Wollheim, and, yes, Damon Knight], he may have indeed been doing strange stuff not inconsistent with early Ballard.) 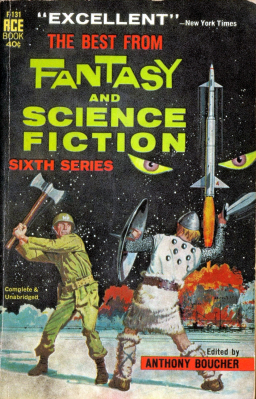 This leaves out the following first rate stories from 1956: “The Dead Past” by Isaac Asimov; “… And Now the News” and “The Skills of Xanadu” by Sturgeon, “The Man Who Came Early” by Poul Anderson, “Horror Howce” by Margaret St. Clair, and Knight’s own “The Country of the Kind.”

Mind you, it is entirely possible that the Knight, either Sturgeon, or the Anderson were among the other three stories in Knight’s list of 9. In fact “… And Now the News” and “The Man Who Came Early” did appear in The Best from F&SF, Sixth Series — I’d venture a guess that those were indeed two of the stories Knight was talking about, and I’d guess as well that “The Country of the Kind” was the third. These are mostly pretty gloomy stories, too, I might add.

Knight is particularly dismissive of Robert Nathan’s “Digging the Weans,” by the way.

Knight’s other reviews are of Jack Finney’s collection, The Third Level — he is quite liberal with his praise here; of the Golding/Wyndham/Peake anthology Sometime, Never — he liked it a great deal too; and of Leonard Wibberley’s Take Me To Your President, which he hated. (“The author’s views on politics and similar matters are vintage 1933, his style is barely above the juvenile level, and what he knows about rockets could be inscribed handily on the head of a pin.”) He also mentions an Advent portfolio of Kelly Freas’s work — though a Freas fan, he suggest that the portfolio does not showcase him as well as might be preferred.

One last snippet — this issue includes the annual Statement of Ownership, Management, and Circulation. So what was its circulation? Well, it doesn’t say — it says “This information is required from daily, weekly, semiweekly, and triweekly newspapers only.”

Is that true? It seems odd — the other magazines I’ve seen seem to report it, be they monthly or bimonthly or whatever. 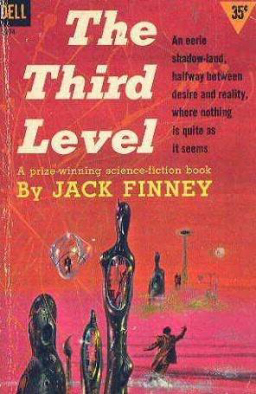 “And Then the Town Took Off” has a goofy premise. A town in Ohio breaks loose from the Earth and starts to fly off. It’s told from the POV of Don Cort, a young man working for the Pentagon, who has something important handcuffed to his wrist when his train stops in Superior, OH. This becomes embarrassing when the town takes off.

It’s rather silly, so far, but I have to say I found it oddly engaging. Now I’ll have to read the rest. Perhaps I’ll track down its book publication — it became an Ace Double in 1960 (backed with Andre Norton’s The Sioux Spaceman).

It was thus Wilson’s second novel, of only three, though he kept publishing short fiction until 1989. He’s best known for his 1968 novelette, “Mother to the World”, which won a Nebula.

“Beyond Our Control” is Randall Garrett at close to his worst — no trace of his wit, no particular interest to the conception. Yardgoods. It’s about a communications satellite that suddenly goes off orbit. It’s vital to restore it to the proper place, so after some terribly unconvincing discussions of how it might have had its orbit altered, a robot probe is sent up — and they find something surprising — an alien. As I said, really a weak story.

Rather better was the story by this issue’s Little Known Writer, Robert Ernest Gilbert, who published about ten stories, almost all in the ’50s. This story is set in a future where crime has mostly been eliminated, for various reasons including the fact that life extension had made individual life more prized. But a couple of the few remaining gangsters have to inveigle a Martian orphan into helping them hijack an ice gathering ship in Saturn’s rings, crewed by a wacky old man. 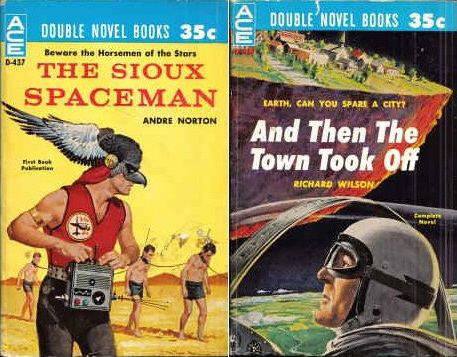 Things get complicated when, in addition to the gangsters, a couple of radical environmentalists show up, protesting the devastation to the rings from the ice miners. The upshot is, of course, that the young orphan sees the error of his ways — and gets the environmentalist girl to boot. It is generally rather silly — but somehow I enjoyed it.

“Lenny” is one of Asimov’s later Robot stories, and one of his worst. It’s about a robot that is (by an absurd mechanism) altered to remain perpetually a child. Being a child, it doesn’t know its own strength, so injures someone, which could be a major PR issue.

But Susan Calvin is determined to save Lenny… and in the end comes up with a thoroughly unconvincing rationale to allow that. One of the main issues I have with the story is the violence it does to Calvin’s well-established character — this is Asimov at his most cloyingly sexist.

And “The Statistomat Pitch” is a disappointment from a writer I often really liked in his relatively few stories. It’s a very clunky political satire about an attempt by a salesman to market a new computer, for actuarial purposes. Davis’s point is that CORPORATIONS ARE EVULL!, which is certainly in line with his politics, but the story sets up a straw man and clumsily knocks it down.

So I’d have to say that on balance this really wasn’t a particularly good issue.

Never mind the content, i just adore the painted covers of those magazines..
I need to get my hands on some of those, frame them and put them on a wall in my library!