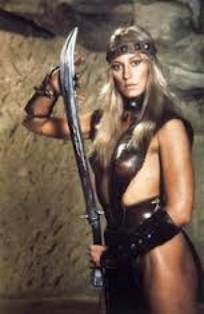 Even a goth chick needs the occasional change of pace, though this one in particular goes back a ways.

When most little girls were playing with Barbie dream houses, I spent my time whacking the neighbor kids with a plastic sword pretending to be the barbarian warrior Valeria. To this day, one of my most prized possessions is my personally autographed photo of Sandahl Bergman, who played Valeria in the first film, Conan the Barbarian.

Had Mattel made Barbarian Warrior Barbie with body armor and a head-on-spike accessory, things may have turned out differently.

Instead here I sit, somewhat giddy to tell you that we’re finally going to get the rest of Conan’s story.

As we reported here on Friday, after 30 years Arnold Schwarzenegger is returning to the iconic role that put him on the path to stardom. If you recall, we exited the first film on a narrative by the wizard Akiro:

Conan returned the wayward daughter of King Osric to her home. And having no further concern, he and his companions sought adventure in the West. Many wars and feuds did Conan fight. Honor and fear were heaped upon his name and, in time, he became a king by his own hand… And this story shall also be told.

And so it shall.

The Legend Of Conan, currently targeted for a summer 2014 release, will tell the story of how Conan becomes king. Schwarzenegger previously played the hulking swordsman, a character created by Robert E Howard, in 1982’s Conan The Barbarian and 1984’s Conan The Destroyer. 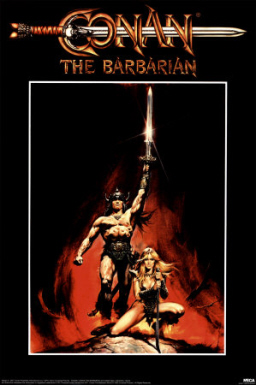 The Legend Of Conan is being produced by Fredrik Malmberg, whose company Paradox Entertainment owns the rights to the character, and screenwriter Chris Morgan, whose scripting credits include Wanted and several Fast & Furious films. Morgan has concocted the story for the new Conan movie and may write the script.

The original ended with Arnold on the throne as a seasoned warrior, and this is the take of the film we will make. It’s that Nordic Viking mythic guy who has played the role of king, warrior, soldier and mercenary, nearing the last cycle of his life. He knows he’ll be going to Valhalla, and wants to go out with a good battle.

If you recall (and you may well not), a reboot called Conan The Barbarian was released in 2011 starring Jason Momoa in the title role. However, the film flopped at the box office and Momoa will not feature in the new Conan movie.

We could have called that one. No one can play a monosyllable blood-letter like Arnold.

Instead, the new movie is conceived as a follow-up to Schwarzenegger’s original 1982 appearance as Conan. Morgan told Deadline:

This movie picks up Conan where Arnold is now in his life, and we will be able to use the fact that he has aged in this story. I love the property of Conan so much that I wouldn’t touch it unless we came up with something worthy. We think this is a worthy successor to the original film. Think of this as Conan’s Unforgiven.

I always loved the Conan character and I’m honored to be asked to step into the role once again. I can’t wait to work with Universal and the great team of Fredrik Malmberg and Chris Morgan to develop the next step of this truly epic story. 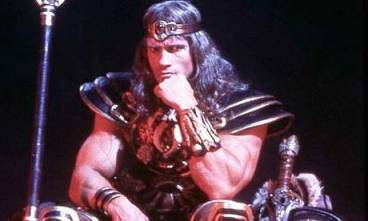 Sadly, Valeria went to Valhalla in the first film so Sandahl Bergman probably won’t be armoring up with Arnold again — unless it’s in a ghost sequence, which would indeed be awesome for more reasons than one.

Back in 1982, Bergman and Schwarzenegger participated in each other’s first ever on-screen love scene. And in the summer of 2011, when I had the opportunity to ask Bergman if she’d ever had the chance to see what Conan kept under his leather loin cloth for real, given Schwarzenegger’s womanizing reputation even back then, she simply gave a wry smile and declined to comment.

Are you excited to see Arnold reprise his role as an aging Conan? Post a comment or drop a line to sue@blackgate.com.

It’s a shame that Mako is dead…

Have you read the original Conan stories?

He is not a monosyllable blood-letter.

Unless all you know of Conan is the movie Conan.

Referred back to the script for the 1982 Schwarzenegger version: monosyllables, bloodletting – check

Your title of King of All Things Conan remains mercifully unchallenged.

You referenced nothing but the film versions, true. Still, that’s part of the problem.

Even if you, yourself, are aware that Robert E. Howard depicted his heroes as being articulate and intelligent (which I doubt), your post would leave any neophyte to REH’s work with the impression that Howard and Milius’ “Conan” was one and the same.

Howard’s Conan was articulate and cunning. Howard originated strong female protagonists like Red Sonya and Dark Agnes. There’s no hint of that in your sloppy blog post.

We apologize that you find the intent of this site so confusing. You are clearly lost.

Please proceed up the stairs and take a left to the door marked Weird Tales Reading Room. There our curator Ms. Novalyne Price will by happy to provide you with the Depression-era literary masterpieces you mistakenly thought you would find here in a post about Arnold Schwarenegger’s latest film.

I am surprised by your snarky replies and downright disrespectfulness in said replies to myself and to Deuce.

It is uncalled for in any way, shape or form.

I had hoped for a much better conversation. Not something like this. Its shameful.

My apologies if your delicate sensibilities were bruised in your attempt to turn the conversation to a topic entirely different than the one written about.

Please also take the stairs up and enter the door on the left where Ms Price will pour you a nice cup of tea. On second thought, take the elevator. We wouldn’t want you to trip and hit your head…again

Sue, I think the issue here is that Black Gate is a website dedicated to a fantasy magazine, and as such, discussion of fantasy literature is something not just to be expected, but actively promoted. Ergo, redirecting Miko and Deuce to the “Weird Tales Reading Room” suggests that you’re not going to find discussion of Robert E. Howard’s Conan not just on this post, but on this site. Which is, obviously, absurd, and doubtlessly not your intention.

You seem to assume that everyone already knows the difference between film-Conan and literary-Conan, where history has shown us that people *still* seem incapable of telling the difference, leading to situations like this, where people can mistake your talk of how “no one can play a monosyllable blood-letter like Arnold” or that “we’re finally going to get the rest of Conan’s story” for lack of knowledge of the original character – not least because Momoa’s version of Conan was significantly different from the previous iteration. I’d love the day to come where people know the difference between REH’s Conan and Milius’ Conan like they can differentiate between Adam West’s Batman and the original, but it’s not that day.

Until then, there’s still going to be confusion about the Arnold films’ relation to REH’s Conan, which is why I think we Howard fans still smart a bit whenever we see “monosyllabic” in regards to Conan, especially on this website. In any discussion on a Conan movie, it seems somewhat bizarre to make a point of *not* discussing the original creator in any context: your statement to that effect rubbed people the wrong way, possibly for the wrong reasons.

Well said Al as always. I am not a wordsmith like yourself…Wish I was..but I suppose I am a “delicate sensibility” artsmith, LoL.

Sue my comments were not meant to be an attack. I was only asking for an explanation. I understood the intent of your article the first time I read it.

I did not however expect the tone and form of your reply.

I apologize if I touched your own “delicate sensibilities” to cause such a reply.