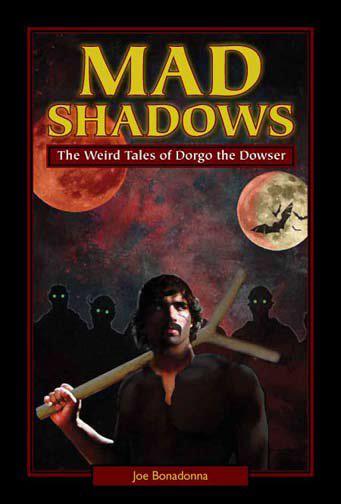 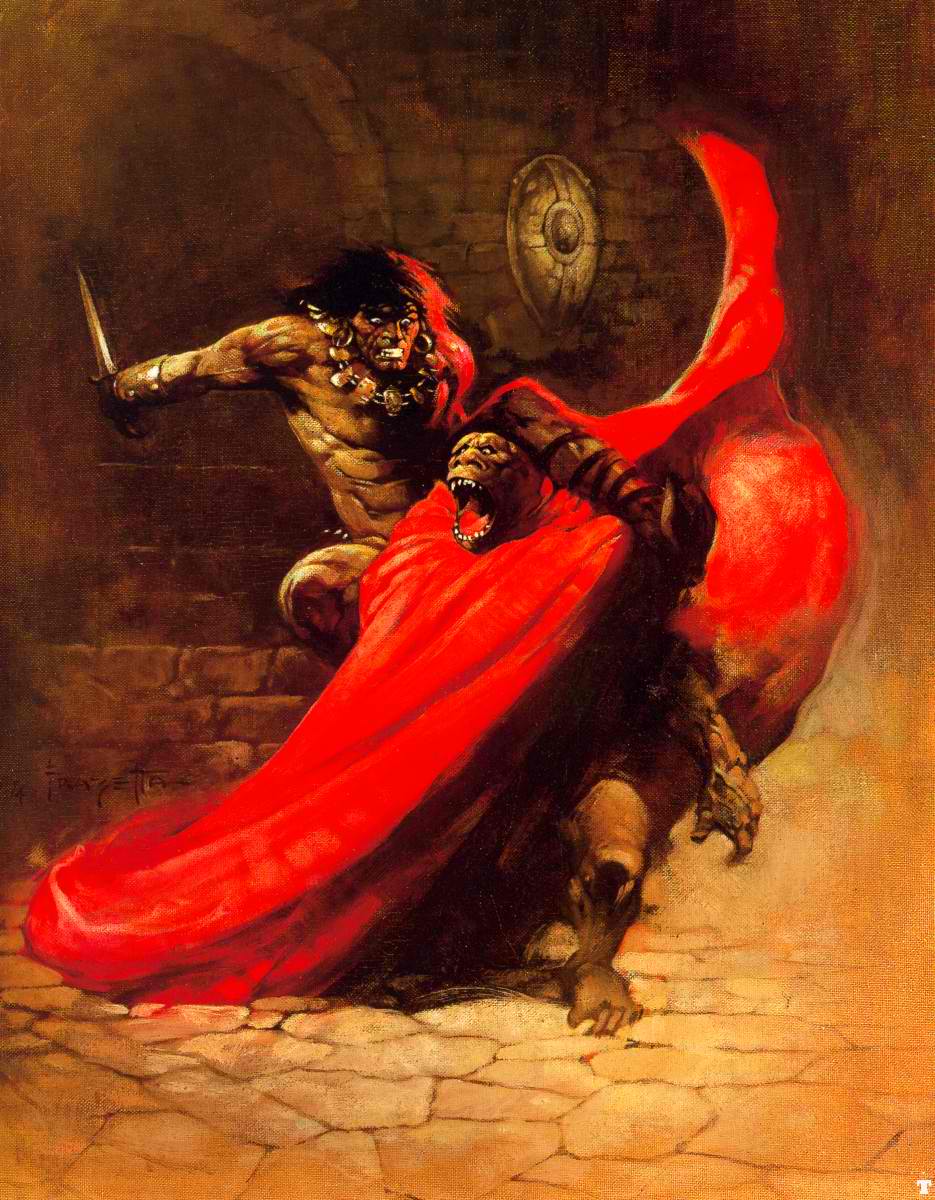 Growing up in the 1970s, the Ballantine editions of Edgar Rice Burroughs’ Tarzan series and the Ace Conan series were part of my steady diet. Seminal pulp fiction graced with stunning cover art by the likes of Neal Adams, Boris Vallejo, and Frank Frazetta. The cover art for the Conan books perfectly captured a bygone savage world that never existed in mankind’s past, but should have. While most Robert E. Howard fans have long since rejected these editions because of the sometimes gratuitous changes made to the original text, the impact of the Conan paperback series on the proliferation of the fantasy subgenre cannot be underestimated.

My own passion for sword & sorcery waned somewhere around the time that Robert Jordan took up his pen to tell bolder and ever more sweeping tales of the Hyborian Age for Tor Books that dwarfed the originals without ever capturing the same sense of wonder. I closed the book on that chapter of my life not long after starting junior high and never expected to revisit it. Flash forward to 2012 when I discovered Mad Shadows: the Weird Tales of Dorgo the Dowser by Joe Bonadonna and found that sometimes you can go home again.

I’m not deluding myself here. I fully realize that New Pulp is a niche market and its impact on 21st Century popular culture is impossible to compare to the inroads fantasy carved into the mainstream in the 1960s and 1970s, when paperback publishers were filling newsstands, libraries, and bookstores with nearly forgotten treasures from the first few decades of the last century. By contrast, New Pulp authors rely almost exclusively on the Internet to market titles from POD publishers in a more cost-effective model that has to work far harder to reach new readers with each title in order to sustain itself. 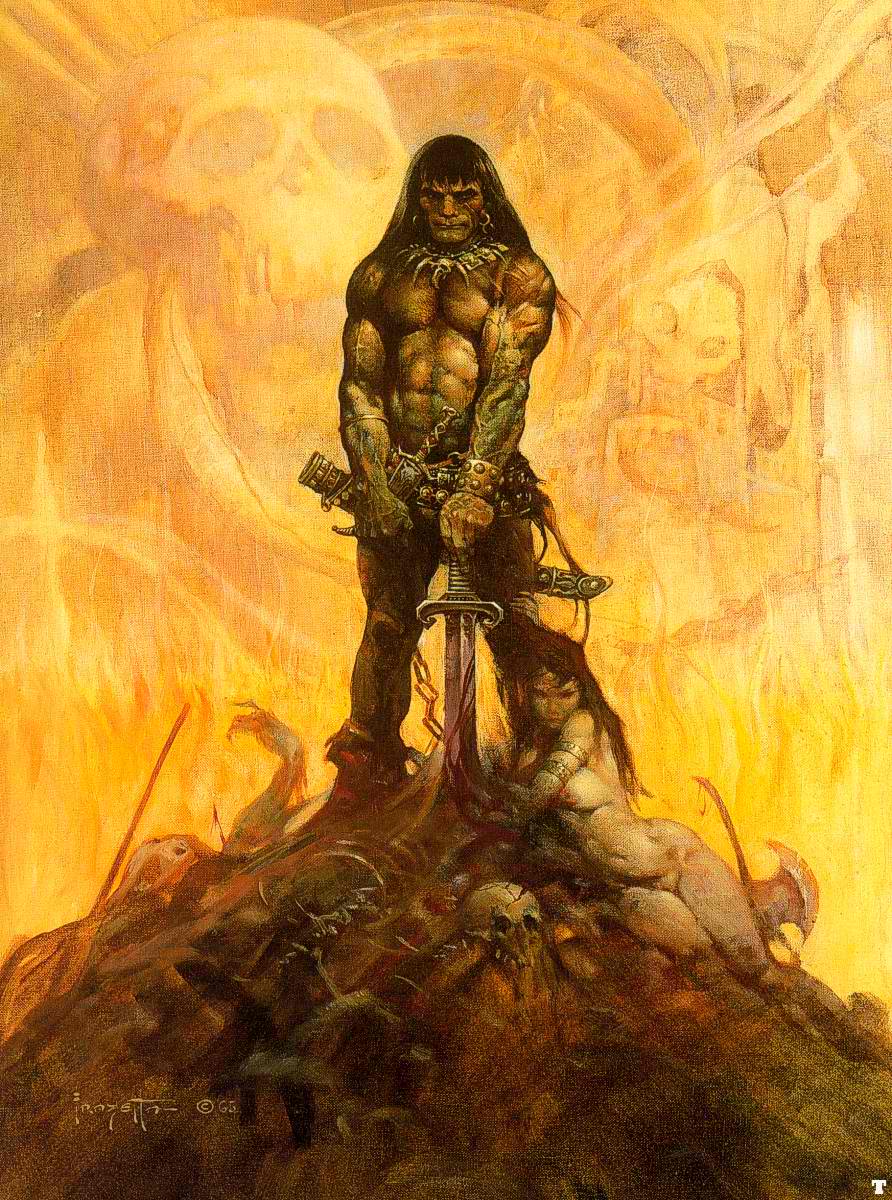 These publishers turn out labors of love, not bestsellers. The authors are rarely able to support themselves with their writing. New Pulp readers are passionate about the genre, but with new POD publishers springing up every month, creating a multitude of options for potential readers, it is entirely possible for a standout title to pass by virtually unnoticed.

iUniverse was one of the pioneers in the POD publishing revolution and their publication eighteen months ago of the first of Joe Bonadonna’s chronicles of the adventures of Dorgo the Dowser in the mythical Aerlothian kingdom of Valdar is just such an unsung classic deserving of far greater acclaim. Bonadonna describes his fiction as gothic noir and it is entirely appropriate. As much as Mad Shadows succeeds in carrying on the tradition of Weird Tales, the brooding, darkly-humored Dorgo could have easily found a home in the pages of Black Mask if only his rod shot lead rather than divined spirits.

The six stories in Mad Shadows offer a mixture of traditional sword & sorcery necromancers and demons as well as werewolves, vampires, witches, and bizarre half-human mutations that H. P. Lovecraft would happily embrace. Dorgo, in some ways, seems like a hybrid of Conan and Robert E. Howard’s Puritan adventurer, Solomon Kane. Like many great western heroes, Dorgo is the wanderer as eternal loner, destined never to make ties or put down roots. Feared for his otherness, he ultimately wins the respect of the survivors once he has rooted out the supernatural evil at work. Dorgo is a knight errant as much as Philip Marlowe and once his work is done, he moves on for the next outpost just over the horizon in need of his aid. 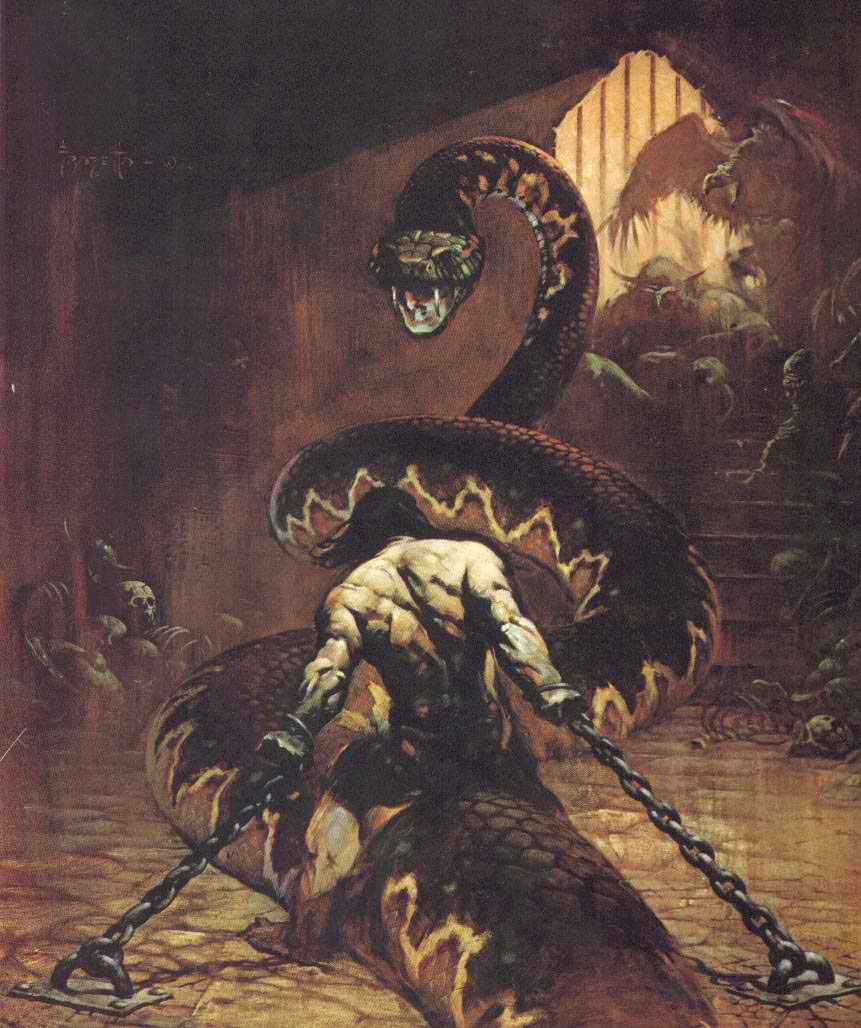 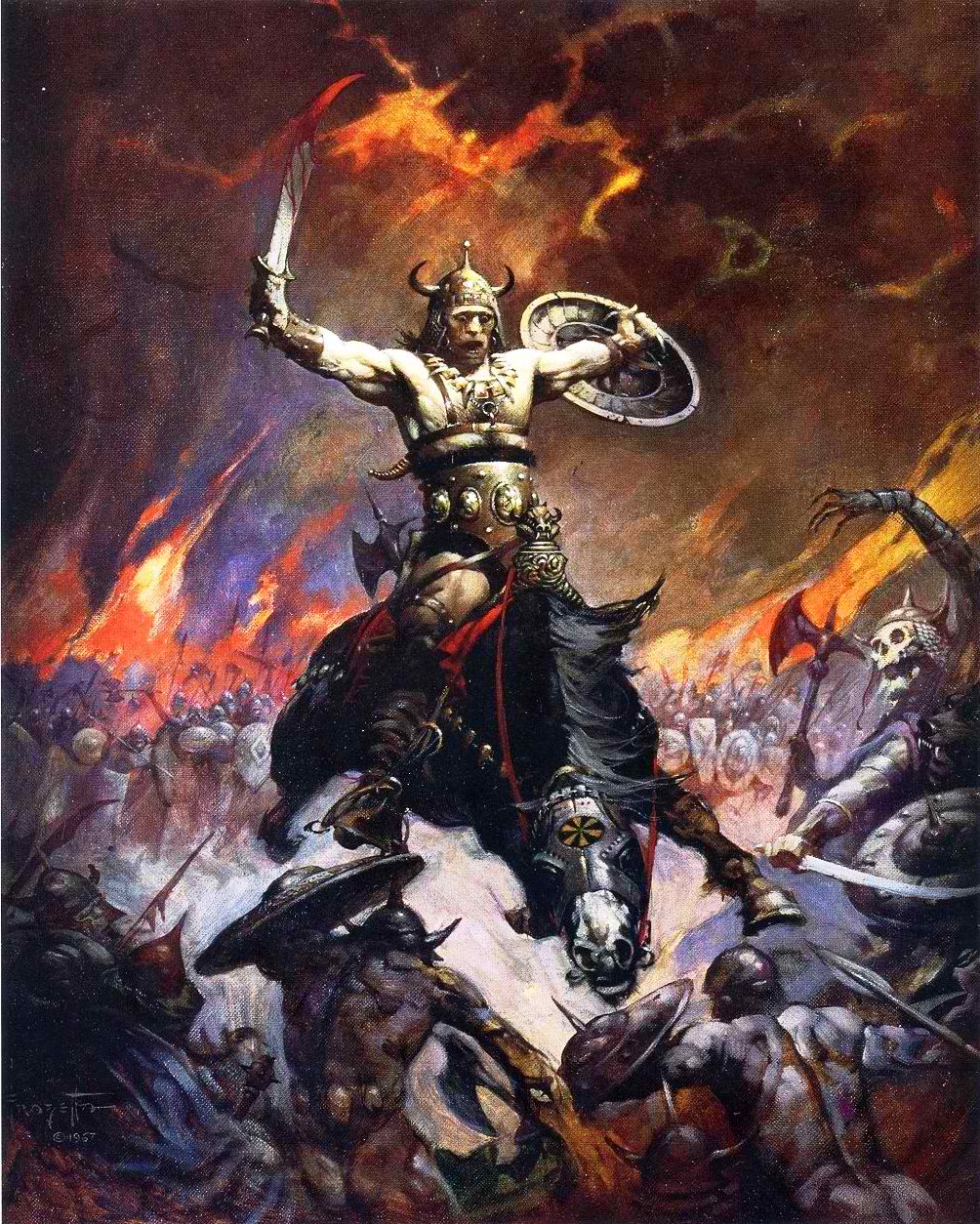 The title story is the most traditional in the collection and pits Dorgo against menacing shadow wraiths questing for the Demonheart. “The Secret of Andaro’s Daughter” is my favorite of the six uniformly excellent masterpieces of mood and dark shadings as it perfectly captures Bonadonna’s gothic noir ambitions with an alchemical twist on both The Maltese Falcon and The Treasure of Sierra Madre that carves a unique place for Dorgo and makes you wish the story had been stretched to novel length. “The Moonstones of Sol Lunarum” is closer to Robert E. Howard territory as Dorgo joins the quest for the Khanya-Thoth Moonstone. “The Man Who Loved Puppets” involves a witch’s destructive obsession with reviving her dead sister. “In the Vale of the Black Diamond” involves the familiar quest for a fabulous diamond with magical properties to save an otherwise doomed life, but Bonadonna’s choice of ailment is rooted more in reality than one is accustomed to in the fantasy genre which provides an interesting twist that makes the stakes far more involving. The sixth and final story in the collection, “Blood on the Moon,” is a suspenseful tale of lycanthropy and is far more gothic horror than traditional sword & sorcery. The six stories in the collection offer an eclectic mix of dark fantasy, hard boiled mystery, supernatural horror, pulp adventure, and wry humor. Dorgo’s ability to use his dowsing rod to root out trouble is a guarantee that Bonadonna has many more twists to offer in future volumes without having to worry about falling into the formulaic.

In short, Mad Shadows has everything that made me love sword & sorcery as a kid when my local librarian and my mom both conspired to keep its pagan charms away from me. Even more remarkably, as someone who walked away from the genre nearly 30 years ago after deciding Robert Jordan’s overblown (if well-written) Conan novels just weren’t for me any more than John Norman’s Gor series, Mad Shadows rekindled my love and made me realize that inner kid was still alive and kicking. So now I’m on fire with a new mission to convert others so that when the second volume of these Weird Tales of the 21st Century reaches print, others will be there thrilling to Dorgo’s adventures and proclaiming the underground sword & sorcery renaissance from on high to those willing to listen and find themselves enchanted by a spell that never really ends.

Consider me a companion disciple, Patrick. Mad Shadows was among the most enjoyable reads I experienced last year. What captured me most were the characters and the dialogue. Joe’s grasp of both reminded me of Joe Abercrombie. I recommend this book to every sword and sorcery reader I encounter. Kudos to Joe for writing such a great piece. I’m looking forward to more.

I bought his book about a week ago and nearly didn’t because the write up on Amazon was not strong. The writer has a good personality and when he posted on Black Gate he seemed to be pretty cool so I decided to give him a shot. I’m glad I did. It was a good read.

I hit the darned enter button when I wanted to hit the space bar…grrr. I love Robert Jordan’s Wheel of time series but it took me years before I gave it a try because I read those same Robert Jordan Conan novels. They were mediocre at best, honestly I’d say they sucked but Robert Jordan is a gawd now and everyone loves him. Don’t get me wrong, he is but his Conan novels soured me to reading more in the Conan line. Publishers were just trying to throw red meat tidbits to the sword and sorcery crowd. The editors of the publishing houses in my view didn’t understand the genre nor did they respect it.

Joe Bonadonna on the other hand takes the stuff that I love to read and brings his own original flair.

Man, I’m speachless. First, William Patrick Maynard, thank you for such a wonderful article. You drew a few tears from me with your praise. More importantly, you enjoyed the book, saw and understood what I was trying to accomplish. I’m working hard to write what I hope will be stories just as good.

Ndoro and Wild Ape, thank you for buying and enjoying Mad Shadows. I hope the next one goes down just as well.

Nina Lassam was kind enough to inform me about the Sword & Sorcery Genre Spotlight which offers a brand new mini-documentary on Sword and Sorcery and Brak the Barbarian featuring vintage footage from old films.

Vintage photos of the books including ads.

And tons of new infographics explaining the genre:

So where’s the best place to purchase a copy Joe? 🙂

Jason Waltz — I just saw your comment/question today, when scrolling through! I must have missed the email notification. Sorry about that.

Thanks for asking! Again, sorry I missed this!