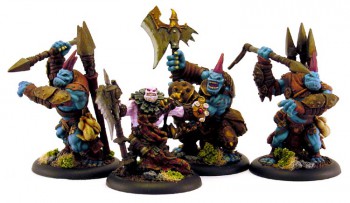 There was a time back in the 1980s when I read Dragon magazine and pined over every ad of a game. It was during this time that I saw a picture of a mini-dungeon with some really cool miniatures included. I must have stared at it for hours and finally, when the Sears & Roebuck catalog came and I could pick out my Christmas present, imagine how happy I was to see the set featured in those pages.

My mother ordered if for me, and the day finally came when I opened my gifts and discovered the box I’d been waiting for. Now imagine my shock and disappointment when the incredible color version of the set was this dull grey plastic. It was in that moment that I was both duped by miniatures and also intrigued. Someone, somewhere, had managed to turn that grey plastic to Technicolor gold… but alas, I wasn’t to try myself and so I dumped it and forgot.

When I moved to Frederick, Maryland, back in late 1997, I ended up going into the downtown area to search out a gaming store. I found a good sized store called The Gaming Realm. Although the store would only last another year and a half after I found it, I still have many fond memories of my times there and all the people I met.

The reason I bring this up today was because it was the first time I’d ever seen miniatures in action. Sure, I’d played board games with miniatures, but those were the prefab kind without true ‘flavor’, and I was still kind of stung by that Christmas gift so long ago.

At The Gaming Realm, the designs of Games Workshop ruled, and so I took the time to sit and watch players enjoy this rather strange competition with miniatures that trounced those I remembered seeing in that old Dragon ad.

For a role-player like me, it was thoroughly intriguing to see players with these huge thermonuclear-proof briefcases come into the store and produce some of the most fantastic pieces of gaming art I’d ever seen in person.

The color, scope, and detail involved in the painting of fantasy and science fiction miniatures are astounding. As I watched these experienced players, a massive piece of terrain was brought forth and set on a table, the precision involved in the piece unlike anything I had seen. 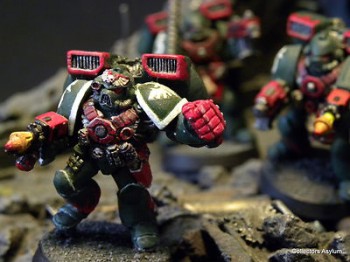 Terrain, for those of you who don’t fully understand, would be the gaming board on which these miniatures are set for the game in question. Much like train modeling of yesteryear, the ability of the players to painstakingly create a smaller version of a world makes you shake your head in wonder. Rivers, buildings, woods, barbed wire, trenches, hardened bunkers, you name it and it can be found on one of these boards somewhere across the globe.

I’m ever amazed that the time spent on the board must be in some degree equal to the task of painting the miniatures that play upon it.

Still, the miniatures themselves are the true gem of the game. The ability to create whole units, armies, vehicles, and epic leaders is what helps bring players back again and again. I’ve watched this over the years and have seen a rather fantastic business model emerge.

Where table-top gaming is concerned, especially RPGs, there is a point of diminishing return for any company. Once you produce your core books, typically a player’s book, gamemaster’s guide, and monster book, there is little else a player needs to continue play other than their imagination. Supplementation of the game is then mandatory, and continuing sales falter. Within a couple of years, a new ‘revised’ edition of the game is needed or the company producing it will fail. For all intents and purposes, RPGs are designed on an untenable business model where consumerism is concerned. 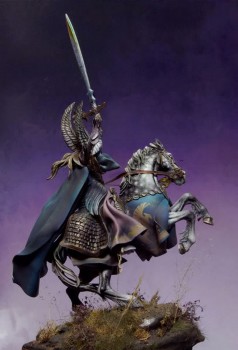 This is not true with miniature gaming, and the business model is sound as certainly Games Workshop, the founders of Warhammer and Warhammer 40K can attest. They’ve far surpassed the like of TSR in the gaming genre. This model was once again proved correct in the mid-00s with the launch of Privateer Press and their hit Warmachine.

These two companies have weathered the storm of changing physical game markets and are doing exceptionally well because their products are both highly creative and ever-changing.

To build an army in one of their worlds, a player must purchase the miniatures, and as armies are organic and evolving with each new release, there is always more product to buy. Add in the fact that the ability to paint the armies is both an acquired and highly addictive skill set, and miniatures become a force for collectors.

When you witness the kind of devotion to the craft that many of the grand master painters of these armies have, you begin to understand just how talented the art is. There isn’t a static sense here, each figure having the ability to be changed, posed, and accessorized as they are being built.

It’s truly a magical event, and I salute anyone who has ever taken up a brush and tried to paint a figure. Your artistic talent cannot be denied, and I hope people will take that into account. Nowhere else in the market of genre gaming can so many artists be found, or should therefore be featured as such. What miniatures have done to the fantasy gaming envelope is a blessing to the genre as a whole, and it helps float all other ships in the field.

I’d like to see more gaming articles. I think RPGs and tabletop miniature games are a benefit to the sword and sorcery genre because the same people who read em, play em.

I’m also a bit shocked that the nerdy stuff that I did as a kid is now almost mainstream and cool. It boggles my mind. Tabletop miniatures hasn’t quite sailed past the nerdy fringe just yet but it’s day will come! Provided of course that people learn to paint better. There is nothing duller than unpainted orcs against an unpainted foe. Once they are painted they cease to be toys and have more respect even if the painting sucks.

Wild Ape: Well, I’m always trying to bring more game related articles into Black Gate, and I do agree that many gamers are also avid readers of fantasy so the two go hand in hand. Thanks for speaking up!

A very expensive and time consuming hobby but with its rewards! Wish I had the time and money. Alas is will have to satisfy myself with an ancient collection of yet unpainted grenadiers and an unplayed box of Bladestorm.

Agree on the business model, who would have though all those years ago that the likes of Warhammer Fantasy Battle would eclipse their RPG and gain such a cult following. Wish same could be said for my fave minis game – Silent Death. Its near impossible to get hold of certain minis via eBay these days.

With all respect to Warhammer and 40k I think they have a great universe but they pissed me off as a gamer. Constant revisions, unbalanced armies, deleted minis and unfriendliness to the gamer—I gave up on them. I play Warmachine and Hordes and I haven’t looked back since. I like Dystopia Wars and Firestorm Armada. They are cheaper and friendlier than Games Workshop. You would have to be independently rich to be a Warhammer gamer and if you don’t have the army de jur then you’ll get your butt kicked regularly.

Wild Ape: Having never played Warhammer, my article was trying to post about painting figures, although I do discuss business models. Now having said that, being a gamer, and running in those circles, I’ve heard many and many again stories of Warhammer players ‘forced out’ of the hobby by GW with pricing increases and devalued armies. GW’s model, according to sources in the community, looks like one invested in ‘teen dollars’ where they constantly renew their market with the increasing disposable income of pre-20 year-old players. I am glad, however, to hear of your enjoyment of Warmachine and Hordes as I believe those folks have the right idea concerning a love of their players.

I have also heard complaints about deleted lists, arbitrary changes and discontinued minis. Actually heard of a gold smith that was comissioned by some passionate gamers to copy some minis they just cant get anymore, although i cant state this is absolute truth or just rumour.

Forgot to mention Scott, in the old dragons, one of the first sestions i turned to was Behing The looking Glass. Loved it! Actually specifically ordered some Viking Forge items due to that series of articles. “Flash, noooo……” 🙂

One game that also looked nice, cant say how playable it was, was the Mongoose Startship Troopers.

Tiberius: I’ve played the Starship Troopers RPG and it was deadly and fun. THIS PLACE CRAWLS! Was screamed to the enjoyment of all as much a possible. My Gamemaster also had some minis that looked nice, but of course he doesn’t paint, so they were just grey plastic to us, although if they were painted up, I think they would have been an outstanding addition to the experience.

One of the things that has revolutionized the miniature industry is computerized sculpting. They often design things now digitaly and then carve the mold. I don’t know if Warmachine does this but they have amazing detail.

Don’t get me wrong, I don’t have the hots for my minis but the crafting has improved over the years. In the past a female had almost an orcish head and humungous boobs and the boobs were the only feature that gave you a clue that the character was female and not an orc in drag. Fast forward and the female models are amazing. The faces even have character and expressions. They are truly works of art.

@Tiberius–it is true what they say about what you heard regarding Games Workshop games. Their business is to crank out minis to attract buyers and I think they will become extinct if they don’t change their business model. Warmachine on the other hand are run by gamers and so they give the game balance and ensure that nothing is obsolete. they’ve had only one game rule revision since inception back in 2004. Games Worshop by comparison revises an entire line up every three years, deletes army lists, minis, and has major game changing rules. Buying a GW army is only good for a couple of years.

I’ve always like Starship Troopers. I’ll have to give them a try.