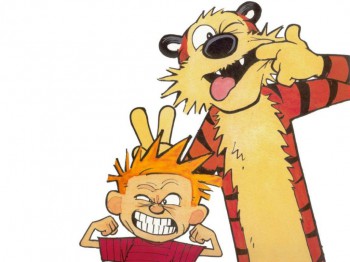 I’m on vacation, but I just can’t seem to take a break from writing about something art related, even though I’m technically ‘off duty.’ Currently, I’m on my first leg, the dreaded trip from L.A. to Vinalhaven Maine, a small island off the coast of the mainland.

Now that is a journey! Up at 3 AM, on a plane at LAX at 6:30 AM, a layover in Chicago at noon, then on to Manchester, New Hampshire, at 5 PM, then into a rental car for a 4 hour drive up the coast to Rockland, Maine, where I get a room at an inn to await the 7 AM ferry to the island the next day…

Yeah, it was kind of rough, but once entrenched in a cabin overlooking the Atlantic with a bit of wifi and no phone service, relaxation can be had. So I now sit on the porch, watching the 15 foot tides roll in and think about one of the more brilliant moments of the trip thus far.

Yesterday, as my six-year old son, Ash, looked through the various books stowed in the cabin’s bookshelves he pulled forth a tattered copy of The Essential Calvin & Hobbes. It had been many years since I’d read one of these Bill Waterson classics, but as I saw him pull the book out, I was filled with a feeling of nostalgia.

My son, as it turns out, is the same age as Calvin, and is a single child, although instead of a pet tiger he has a plethora of plush Pokemon at his service. Nonetheless, he’s now reading fervently, has a bit of a precocious streak, and instantly fell in love with the book that is admittedly almost too large for him to read. 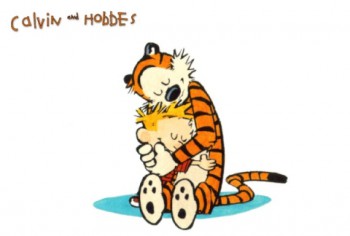 The giggles and raucous laughter that followed my son’s discovery reminded me of all the times I’d read this strip when I was young. Waterson’s seminal work is a true classic, and the art involved is something that I’ve always been, no pun intended, drawn to.

I’m still amazed that it’s been nearly two decades since this strip ended. I’m also astounded that the official print run of the comic was only 10 years, November 1985-December 1995. How could something so incredible and lasting in the American cultural conscious have only been produced for a decade? I mean, I can certainly still find copies of the reprints on discount shelves at B&N each Christmas, but it’s not like original work has been creeping out over the years to keep the brand fresh.

Simply put, this comic is powerful, and perhaps Watterson wanted to go out on top and not prolong a decline like Peanuts, Family Circle, or Garfield, but still, it is painful to think of all the strips that might have come after.

I well remember when it ended and my thought that there had to be some kind of conspiracy going because Gary Larson’s The Far Side had ceased publication in 1995 as well. How could the two greatest American comic strips of the 80s be gone in the same year? It was painful, and also a great precursor to the end of newspapers as the advent of the Internet gave me even more of a reason to stop reading them once ‘the funnies’ were no longer funny.

Waterson’s artistic style and simplistic art was the benchmark for what makes a comic strip ‘move’, and although once he ceased the strip, he abruptly fell off the face of the planet never to be seen again, that shouldn’t detract from what he achieved during his days in the sun.

So, for the joy of my six-year old, and for all the laughs I remember having at this little boy with a red shirt, spiky blond hair, and pet tiger, I add Waterson to my long list of greats inside Art of the Genre.

Didnt Breathed’s Outland finish up its run in ’95 also?

But Yeah, The Far Side, Calvin and Hobbes, and Bloom County, were the reason to have a newspaper subscription in the 80s.

Calvin and Hobbes was my favorite strip back in the day. Those were some amazing strips. I need to try and pick some of those old compilations up.

SFTheory1: Well, at least you should be able to find them easily when the holiday hits, and usually at a nice discount.

I have the three volume complete set — it’s great to see the art at that size; I just wish the volumes weren’t so unwieldy.

Joe H: I’m sure I’ll own them all soon enough!

I was a freshman in college when Calvin and Hobbes premiered. It’s hard to overstate the impact the strip had on me. I still occasionally ask for a transmorgrifier at Christmas so I can be a pterodactyl and terrorize the neighborhood. My family thinks I’m joking, but there’s a longing and a seriousness there at the core of that request that I trace back to Calvin and Hobbes.

It was good that he ended before getting stale. I can actually remember when Garfield was consistently funny–way back when it first came out. But I’m not old enough to remember that about Peanuts or Family Circle (though I have seen some of the early, almost punk, Peanuts strips).

Even a recent fave like Get Fuzzy has been getting stale over the last few years, and I worry that will happen with Pooch Cafe before too long.

Better to quit while the ideas are still fresh.

I’ve always managed to find new daily strips to replace the ones that end or become dull and unfunny. The only thing I believe that’s come close to “Calvin & Hobbes” (and might outdo it in the long run) is Richard Thompson’s “Cul de Sac”. It’s got an equally insightful eye on childhood. Good stuff for comic junkies.

When someone that talented falls off the planet, I like to imagine that s/he’s secretly working on something awesome in the basement, something so different from what s/he’s famous for that it will be unmarketable until s/he’s dead, at which point in will instantly become a classic. Anyhow, that ‘s what I’d like to think I would do in that situation.

Sarah: I remember hearing a rumor once that George Lucas was secretly filming Harrison, Hamill, and Fisher getting older and doing ‘family stuff’ at the Skywalker Ranch each year after the release of Jedi. So yes, I dream of the same thing, the artist that stops producing stuff secretly continuing their work as the muse hits them. It’s never happened, but it would be cool wouldn’t it? Like Tolkien having another trilogy that was to be released 50 years after his death since he didn’t write a novel of Middle-Earth the thirty years he lived after finishing Lord of the Rings.