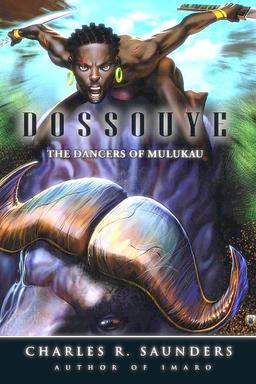 Dossouye: The Dancers of Mulukau will feel a bit like new territory for fans of Charles R. Saunders. Unchanged, of course, is the terrific action and imagination of Saunders, and the fidelity to character and setting — indeed everything there is to love about Saunders’ Imaro and Dossouye stories is evident in this latest offering. But The Dancers of Mulukau is Saunders’ first full-length sword & sorcery offering of recent years that is not based wholly or in part on existing material, and represents the Saunders of today, not of decades ago. After the various ups and downs of Saunders’ publishing career, it feels good to at last come to a place in which this author’s classic works are now safely preserved and easily available. Now he is able to move forward into as yet uncharted territory to tell new stories and develop new themes, reminding us once again why he must be counted among the giants of the field of heroic fantasy adventure fiction.

Dossouye herself is in new territory at the start of The Dancers of Mulukau. The story of how Dossouye, formidable warrior woman of the Abomey, came to leave her people and wander the land is told in the first book, a picaresque fix-up novel based on classic novellas penned by Saunders in the 70s and 80s, with additional unpublished material and a new story added for the book’s release in 2008. I won’t trouble to repeat much of what I said about Dossouye in my original review of that book, but readers can be assured that all of the hallmarks of those foundational stories have returned and are enlarged upon in The Dancers of Mulukau.

At the start of the novel, Dossouye and her war bull Gbo have journeyed north, through the great rain forest that separates the coastal lands that they know from the unknown societies at the edge of the great desert. Saunders’ use of authentic ancient, medieval, and pre-modern African civilizations for the inspiration of his fantasy worlds is very much in evidence, as Dossouye’s West African analogous landscape (Imaro‘s setting was predominately East African in origin, in a land called Nyumbani; which is not the same place as Dossouye‘s Ilodwe) has moved from regions roughly corresponding to the kingdoms once located on the western coastal regions of central Africa, to the very different civilizations that developed on the trade routes on the southern verge of the Sahara (Saunders’ Mkavu Desert).

It is fun, and instructive, to play the analog game to see the sources of Saunders’ inspiration — here is Timbuktu, these folk are Tuareg — just as it can be with any work of fantasy that celebrates history through this kind of interpretive reimagination. But the technique of using real world peoples to inspire fantasy cultures is so ubiquitous that it is virtually un-commented upon when encountered in most fantasy books — and I suspect that is because many fantasies (though authors have gotten much better about this) are stuck in a generic default Disney version of medieval Western Europe. One of Saunders’ earliest impulses as a writer was to take the rich mythology and history of Africa and do with it what other writers were doing with traditional European elements, and this passionate world building is still very much in evidence in The Dancers of Mulukau — which indeed immediately begins with a description of the places and peoples with whom Dossouye, a stranger and outsider, now finds herself.

Dossouye appears an outlandish sight to ba-Djarroke and other peoples of the area, who have never even imagined the idea of a woman warrior before — let alone seen one mounted on a ferocious cape buffalo! The ba-Djarroke are the main inhabitants of the prosperous and cosmopolotin merchant city of Djarro, a place located at a nexus of trade between the gold-rich hill country of the east, the hides and ivory of the western forest, the salt of the northern desert, and the mastercrafts of the south. The people of Djarro use magic in the construction of their fabulous buildings, which allows them full use of their imaginations “and in consequence Djarro’s architecture was a congeries of crenellated walls, scalloped facades, blunt-tipped towers, and roofs angled to allow the rains of the wet season to spill to the ground.”

But it is the people of this world that most attract Dossouye’s, and Saunders’, attention — the ba-Djarroke, the Nuari, the Kuluku, and the fundamentalist Walaq. Each are wholly different and organically fitted into the human geography of Saunders’ world, no doubt in part because of its strong historical basis. The Dossouye stories, just as the Imaro tales, shatter any preconceived ideas about a monolithic, homogeneous, and generic Africa. Through a fantastical lens, Saunders immerses us in an imaginary Africa in which the fabulous and fascinating elements are derived at least as much from real world antecedents as from the author’s lively imagination. While maintaining the pace of a sword & sorcery tale, Saunders always seems to manage to infuse his settings with a veracity generally reserved for epic fantasies of twice the length, and I can think of few writers of fiction who kindle my own historical curiosity as much as Saunders does.

In this world Dossouye finds employment as a mercenary, not without first having to prove herself in the company of men. In defeating, and humiliating, a man that will become a fellow mercenary and sometime enemy in the course of the story, we learn that Dossouye’s real strength is her intelligence and training — a skill that lets her always strike obliquely at a foe, and to dissipate and redirect their strength, even if it is greater than hers. Though accepted into the ranks of the mercenary iskiris, Dossouye remains an outsider who must continue to prove herself as an equal — which she soon does, on the field of battle.

The iskiris have been hired to escort the eponymous Dancers of Mulukau to the city of Khutuma, a place possessed of a fabulous well with healing properties. The dancers are potent and unique wielders of kyame, sorcery, and through their intricate and arcane dances they deploy such powers for the good of the people of the area — it is they that renew the healing well from time to time. The dancers themselves are sacred to the male-female god Mawi Lesi, and embody both male and female aspects in balanced proportions. Saunders uses the pronouns hir and s/he when referring to the dancers, and this sexual duality and difference is an underlying theme of the novel, one complimentary to Dossouye’s own struggles to gain acceptance as both female and outsider.

The dancers are hated with a genocidal fury by the Walaq, a monotheist desert people that follow the Truth of Mulut. Long have they desired to bring the Truth to the other peoples of the land, and as the first step in such a campaign, they seek to eradicate the Dancers of Mulukau, a people antithetical to their revealed Truth. One need hardly elaborate further to see the point Saunders is making or to find parallels with our contemporary world, but Saunders handles these elements with maturity and some subtlety. Even among the Walaq there are those that do not wish to impose their will on other societies, and they prove important to the resolution of the story.

Dossouye falls in love with one of the Dancers, who accept her far more readily than the men of the iskiris. But the Walaq’s own kyame sets things in motion with a devastating shadow demon attack upon the Dancers in which Dossouye’s lover is taken, along with many other Dancers, to the secret domain of the Walaq, deep in the desert, there to power a dark ritual that could result in devastation for all Ilodwe. The action is furious, the foes horrible, and the stakes are high as Dossouye and her allies battle the forces of fanaticism and their sorcerous allies for the fate of the world, and the life of those Dossouye holds dear.

It all sweeps to a satisfying conclusion, and the last line promises yet more adventures from Saunders’ warrior woman. Dossouye: The Dancers of Mulukau is a fast-paced book, Saunders sketching with a few deft strokes what other writers might belabor for a paragraph, and the action and invention are relentless. Saunders’ prose seems leaner, more considered, from that of his earlier work, though the confidence and humaneness of his voice ring just as true as ever.

As always with Saunders’ Sword & Soul Media publications, Dossouye: The Dancers of Mulukau has a beautiful cover illustration from Mshindo Kuumba — his best yet in my opinion, which is saying something. In addition, there are several pieces of interior art by Kuumba and Paul Davey, all amazing stuff that really adds to the feeling of a quality publication.

This review of Dossouye: The Dancers of Mulukau also appears at Deep Down Genre Hound

This sounds great, Bill. I was just looking over at my bookshelf and realizing this one somehow flew under my radar. I could have sworn I’d ordered it already.

I read most of Saunder’s short story of this character in “New Treasures: The Sword & Sorcery Anthology” in Barnes and Noble recently. I’d have read the entire thing but the person I was with had to go. I’ll get it later, probably next trip. This book too, I think…

I think Charles Saunders is a great writer. I do like reading his work, from that story, from his website. And this is from a Conan/Pulp/Sci-Fi fan even one who likes “old school” and “Non-PC”. He can tell a good story, period:-)

I vaguely remember Imaro, reading the early book but losing it way, way back. I’ve obtained the new “Imaro #1” (thanks to Black Gate informing of this) and will get the rest of that series eventually.

For personal reasons I won’t re-read Imaro and stuff right now. I almost explained but it’d read like hyping/promoing a personal project so I won’t.

A great review about a great character from an even greater writer . . . Charles Saunders created a new genre and inspired a whole new generation of writers. His recent Pulp Factory award for best novel forDAMBALLA was well earned.

I’m looking forward to reading Damballa, feel like I need to brush up on some boxing stories first though.

Thanks for the comments, guys.

Saunders just jumped to the top of my list of authors to pick up next time I’m in a con dealers’ room. Thank you!

Glad to hear that, Sarah. Keep an eye out for the Night Shade editions of the first two Imaro books, they are the likeliest finds, and a good place to start.

@Bill Ward–I’m with you on the boxing stories. I think that genre is almost gone.

I’ve been reading Charles Saunders Imaro and loved it. I’ll pick this up. I’m finding that the female characters in his stories are often tough individuals much like Howard’s Belit and Red Sonja.