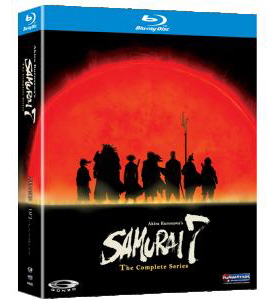 It was my daughter’s 13th birthday yesterday. One of the things she wanted was the 2004 anime series Samurai 7, which her brother Tim gave her in a handsome Blu-Ray package.

As the parents of most young girls will tell you, it’s not enough to get them a few presents and a hug for their birthday. What they really want is attention. And what Taylor really wanted was for Dad to watch Samurai 7 with her.

Which I did. All 3.6 hours of Disk One, a full nine episodes. Let’s face it — the days when my teenage daughter will want to hang out with me are coming to an end; better seize them while I can.

I’m glad I made the effort to spend time with her. For lots of good reasons, not least of which was that Samurai 7 turned out to be a terrific piece of animated cinema. A lot more enjoyable than those two hours I spent playing dolls when she turned six, let me tell you.

I knew the basic premise before parking my butt on the couch. Like Yul Brynner’s classic Western The Magnificent Seven, Samurai 7 is directly inspired by Akira Kurosawa’s 1954 film Seven Samurai, one of the most influential films ever made.

A small group of peasants whose town is ruthlessly pillaged by bandits every year journey to the city to hire seven masterless samurai to defend their village. Desperate and poor, all they can offer these samurai is rice — and not very much of it.

Seven Samurai is set in sixteenth-century feudal Japan; Samurai 7 translates the classic story to a post-apocalyptic world of towering, decrepit cities and a blasted landscape dotted with the twisted debris of a recent war.

Nobuseri bandits — men who surrendered their humanity during the conflict to become integrated with massive war machines — threaten Kanna Village, and a young water priestess named Kirara and her two companions make the dangerous journey to the provincial capital to seek samurai to protect them. 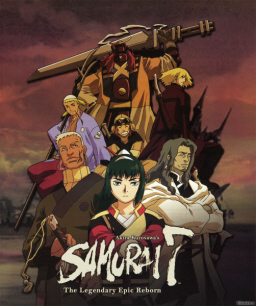 Samurai 7 is terrifically inventive. The setting is vividly realized and wonderfully detailed, and the animation and voice acting are top notch. Each 22-minute episode is a marvel of tight plotting, with crisp dialog and engaging characters.

While the stakes are high and the overall tone is quite grim, there’s also a lot of unexpected humor. It seems I laughed out loud at least once during each episode, and several had me chuckling throughout.

Like all great fantasy epics, Samurai 7 has a colorful cast of villains, including the Baron Harkonnen-like Ayamaro, the powerful and cruel provincial Magistrate; his spoiled son Ukyo, who kidnaps Kirara to add to his harem; and his various bodyguards and assassins, including the androgynous and lethal Hyogo. As nasty and evil as they are, however, they’re also a complex and surprising lot, with their own complicated motives… and in an unexpected twist, one even becomes the final — and perhaps most deadly — of the promised Samurai 7.

Finally, Samurai 7 taught me something interesting about my own love of science fiction and fantasy. With a story and theme identical in virtually all respects to The Magnificent Seven and Seven Samurai, it still managed to delight me with its own brand of humor, charm and inventiveness. But unlike my daughter, who was riveted by the compelling storyline, I found much of my enjoyment came chiefly from surprises born of the science-fantasy setting.

A powerful and boisterous robotic samurai in constant need of repair; the villainous Nobuseri bandits, who made the ultimate wartime sacrifice only to be rejected by society; the many-layered mysteries of Magistrate Ayamaro’s motives and subtle, shifting alliances. Each and every episode was packed with surprise twists that revealed more of the delightfully complex setting and the fascinating characters that inhabited it; these are the fine rewards that await seasoned fantasy readers in Samurai 7.

Samurai 7 retails for 39.98 for the DVD, or $49.98 for the Blu-Ray version; both are nicely discounted at Amazon.com. Both sets offer the complete 26-episode saga: 625 minutes on 3 disks, with several bonus features.

I’d like to offer an unequivocal endorsement, but I can’t do that until I watch disks 2 and 3, and when that happens depends on Taylor. She’s thirteen now and I can’t tell if she’ll want to spend Sunday evening cuddled with Dad on the couch, or on the phone with friends.

I’m not enjoying the wait to find out.

A close cousin of mine bought this when it came out and tried to get me to watch it. It looked like too many genres mixed all in one so I never did watch it. Maybe I will now.

What interesting tastes your daughter has.

> It looked like too many genres mixed all in one so I never did watch it.

But if you can look past that, it’s great.

Well I hunted down my cousins copy of this series and I’m 3 episodes in. Thanks John thats alI needed while I’m trying to pack to move in to my new house is a tv series that I d rather be watchIng.

The giant robot is already my favorite character

My pleasure. That’s what I’m here for.

> The giant robot is already my favorite character

My daughter told me he would grow on me, and she was absolutely right. Kikuchiyo is a delightful character… he never gives up, and he’s loyal to a fault.

[…] few months ago I wrote about Samurai 7, a terrific sword-and-science retelling of Akira Kurosawa’s The Seven Samurai (with killer […]