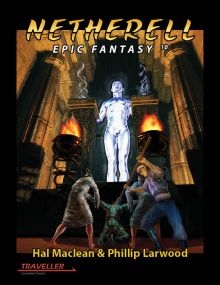 It’s one of my distinct pleasures as a reviewer to highlight overlooked books. All sorts of RPG books crossed my desk last year, and my fellow game reviewers and I tackled a lot of deserving ones in the last issue of Black Gate, but inevitably some fine ones got overlooked.

I’ve been impressed with the line of products I’ve seen from Terra/Sol Games, starting with their Twilight Sector sourcebook and continuing into their sector companion, Tinker, Spacer, Psion, Spy. I can heartily recommend both for the Traveller fan. But their Netherell supplement, released toward the middle of last year, has even broader appeal. It is an epic fantasy setting implemented with the Traveller rule set. You’d think that it would read like something awkwardly shoehorned into place – like rules for a Star Trek game using the classic D&D experience point system – but it works, and it works well. Any fantasy fan looking for a new way to approach their game play should give it a look.

One of the niftiest things about the original Traveller was the generation system. Updated in succeeding editions so it was no longer possible to die during character creation, its modern incarnation is even more engaging, almost like a sub-game in itself, and Netherell uses that to full advantage. Once you choose a career for your character (for example, soldier, thief, or entertainer) you can then select sub-branches, like burglar for thief or mercenary for soldier, to have access to different kinds of skills that you accumulate over the course of your career. And as you roll those skills, you also gain incidents and events that you’ve experienced as you’ve aged. For instance, a thief might gain access to high society while running a scam and gain a benefit roll and an extra level in a related skill like carouse.

I’m not sure I’m completely conveying the sense of the fun, so I’ll try another tack. In many games, character generation can be tedious and even overwhelming, and is something you wish to quickly finish so you can get on with the game. In Traveller, and now with its fantasy implementation, character generation is actually enjoyable, and creates a background story for your character as you move through it.

Netherell is more than just a character generation system, though. There’s also an inventive rule set for the use of magic, and a well-designed setting. You might be worried that a third-party company would develop a generic background only of mild interest, but there are some great ideas and twists on familiar themes that could enliven any campaign, even if a GM chose not to use the book for its Traveller ruleset. One of my very favorites is the concept of the dragon, which the writers envision as “the fusion of powerful magic and negative emotions with tremendous quantities of receptive inanimate matter… creatures of pure destruction and rage that actively seek out towns, as well as magical people, to consume and destroy.”

While it’s true that you’d need a basic Traveller book for the first steps in character generation, if Traveller and science fiction aren’t your thing, you wouldn’t have to purchase the complete main rule book to implement Netherell, just Book Zero, Introduction to Traveller. It’s available as a download from RPG Now for less than three dollars, and hard copies can be picked up for around six.

I sometimes toyed with the idea of doing a Traveller-based setting that would use the original Traveller races (Aslan, Droyne, K’Kree, Vargr, etc.) in a fantasy world.

I always love reading about the Traveller setting, even if I never even end up running the adventures.