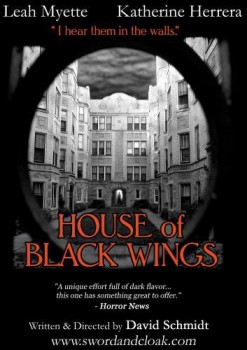 Despite garnering critical and commercial success over and over, the horror genre is still dismissed by many as lowbrow and simplistic.  Big studios just don’t like investing a lot of money in horror.

Except when some low-budget film becomes a huge success.  Then the studios rush in to produce big budget sequels and big budget re-makes, none of which are as good as the original low-budget feature.  There’s a reason for that too.

Low-budget films can be risk-takers.  They don’t have a hundred-million dollars riding on their success, so they can explore areas that will bring them a smaller (but often dedicated) viewership.  There’s nothing new in Hollywood, but a quick look through independent cinema venues reveals that this is a boom time for horror movies.  House of Black Wings is one of those movies that you have to seek out; but one which is well-worth the effort.

The story begins with Kate Stone, formerly up-and-coming rock star Nicki Tarot, as she abandons the career that has left her ruined emotionally, financially and physically.  She finds that her only remaining friend is Robin Huck, a struggling shadowbox designer who has inherited a deteriorating apartment building following the death of her father.  The two women act as caretakers to a home filled with struggling artists.  But in the midst of all the emotional turmoil, there is a supernatural threat that tempts them with promises of escape.

The black-winged creatures are only glimpsed once (in a quick-jump creepy scene that would have become a lame ten-million CGI effect had this been a big budget film … I know, I have to let it go); but we get to know them through the music, stories, paintings and models that they inspire others to create.  The Lovecraftian influence is obvious throughout the film, although writer/director David Schmidt wisely chooses to use Lovecraft’s concepts of otherworldly powers without actually co-opting Lovecraft’s character names (no Cthulhus or Yog-Sothoths here).  In fact, this film plays out like some of Lovecraft’s best stories, with one glaring difference.

H.P. Lovecraft almost never wrote female protagonists (or female characters in any significant role) and even his male protagonists tended to be rather bland narrators whose function was merely to relate the story.  But here we have two young women whose stories would have been interesting without a supernatural element (former rock star recovering from an attack by an obsessed fan / struggling artist coping with the death of her father).  Since the supernatural elements prey on insecurities, their backgrounds aren’t simply presented as boring filler, but as vital elements to the story.  This film is very much a character-driven narrative, which (no offense to one of horror’s master storytellers) was never Lovecraft’s strong point.

House of Black Wings is just a great, creepy little horror movie.  Do yourself a favor and watch it now before Hollywood does a crappy big-budget re-make.  If you want to learn more, check the Sword & Cloak Productions website.

I’m afraid the trailer would scare me away. I see a lot trailers that remind me high quality digital cameras have become inexpensive. This looks like one of them. No doubt I’ve missed out on some good movies, but when the acting and production values (audio being the big one) look subpar I play the odds and stay away.

I’ll cut a low budget film all kinds of slack if it tells me a good story. If the budget for splashy special efects and A list stars isn’t there then then the film has to stand on the power of its story.
Which is exactly what the low budget flicks Mr. Penkas references did. Carnival of Souls, Night of the Living Dead, Halloween, Texas Chainsaw Massacre, Ringu, Blair Witch Project, Paranormal Activity, and others.
Seems like we get one every ten years or so that busts out big time and spawns a rash of big studio imitations that, no matter how much more cash gets spent, are not half as powerful.

So I’ll check out House of Black Wings. Be nice to see someone trying to capture a little Lovecraftian vibe without filling the screen with rubber tentacles.