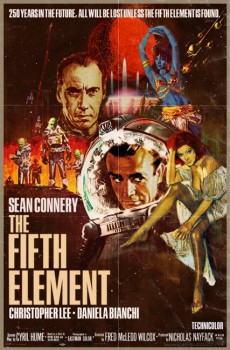 Have you ever heard the phrase, ‘This is going to be the next INSERT ICONIC FRANCHISE HERE’? I’m pretty sure we all have, but the one that sticks out most starkly in my memory was from 1997.

I’d recently moved to Maryland and I well remember seeing the trailers for the Bruce Willis science fiction vehicle The Fifth Element. The billing indicated it to be, ‘The next Star Wars’. I was so excited, I dragged my then twenty-five year old wife to the theater in hopes the billing might have some kind of thread of truth.

I well remember her reaction to the film, and most appreciably the movie’s use of the word ‘perfect’. It was truly a painful experience, one that is as fresh today as it was then, and yet over the next couple of years I not only forgave The Fifth Element for not being the next Star Wars, but learned to appreciate it on a level I never thought possible.

I mean, when you get down to it, the next Star Wars wasn’t even ‘The next Star Wars’, Phantom Menace was a complete debacle that somehow manages to look like a Academy Award winner next to The Attack of the Clones and Revenge of the Sith.

Fifth Element isn’t Star Wars, it’s anything but, and yet if you don’t make that connection and simply try to view the movie as a solo performance it’s truly a fun piece of science fiction. Willis renders a great Die Hard-like role, and Milla Jovovich is indeed ‘perfect’, much to my wife’s volcanic fury at the assessment. 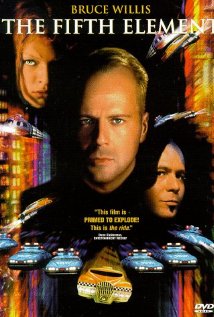 When I was working at the turn of the millennia as a manager at Circuit City I would take this movie, now available on the newest boom format, DVD, and demo it on the most expensive surround sound home theater systems we had. Every time I saw it I loved it more, and the costumes by Jean-Paul Gaultier, the over-the-top of Chris Tucker, the foreign gibberish language of Milla, and the fact that someone pulled off a space adventure based on nothing more than love.

So I’ve asked myself, other than a marketing fail, does this movie have fatal flaws and would it be possible to make it even cooler than it currently is?

It wasn’t until a month ago that I discovered there is a way to make The Fifth Element even cooler in my own mind than it was in 1997. How? Well, to have it actually be a remake!

I was so thrilled upon seeing this fake vintage movie poster that I’ve not been able to stop myself thinking about it for weeks, and so I’m going to share it with you. Is it art? Yep, in more ways than one, but I’m not getting into that here, just sharing a visual and nostalgic experience for the simple genius it is.

If you’ve ever seen anything like this before, please let me know because I’d love to see others of this ilk. Until then, enjoy the memory that never was, and imagine everything it could have been.

The one of Die Hard is a personal favourite!

The Fifth Element is one of my most-watched movies (unlike Star Wars, which I hope to never see again). But I don’t see how the remake angle makes it cooler.

Not that the posters aren’t cool. (Drive is probably my top pick on that site.)

I saw The Fifth Element when one of my comic-collecting friends started raving about a Moebius-inspired film coming to the big screen, and that was all I knew about it in advance. As the next Star Wars, it may have been a flop, but as a live-action Moebius comic, it’s a wild success. The film’s fixation on Leeloo’s perfection was annoying, but I blamed irrationally blamed all the annoying things about the film on Moebius’s Frenchness–I was in grad school and required to read a lot of Deconstruction, which made me grumpy at the French for a while–and enjoyed the rest.

To this day, whenever my husband and I have to use our EZPass device to pay a highway toll, we’ll say, “Multipass,” in that goofy accent Leeloo had. It still cracks us up. That was one of my favorite scenes.

As to pseudo-posters with a retro vibe, I’ll link here to the same faux travel posters for interplanetary travel that I linked to in my comment on Howard’s post. Weird that it should be apropos for both of your pieces, and in totally different ways, but there it is.

Sarah: Multipass is AWESOME! I never really thought about the movie being some kind of French homage, but you are right now that I have that perspective. And yes, it has Moebius written all over it which makes it utterly fantastic.