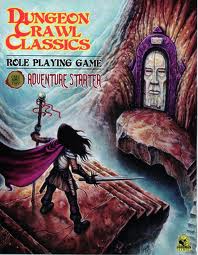 I’m afraid that the Dungeon Crawl Classics role-playing game will hit the modern game audience the way a hard rocking band with great guitar hooks hits teenagers who think greatness is held by those auto-tuned voices and dancing lip-syncers. It might be that they’ll have the sense to understand something good, done right, even if it is artistically out of style, but I can’t help thinking they’ll be too hypnotized by flash and swagger to see the beauty.

Well, I use the term beauty loosely, because the plethora of art in DCC is old-school, in your face, evocative, bloody, and dynamic. It has some of the same aesthetics as counter-culture comics from the 60s, but it’s waaay cooler. Where else can you randomly flip through pages and come first to a wizard riding through a harbor on a giant marauding tentacled thing while being assaulted by an elf riding a hawk? Another quick flip takes you to an armored warrior pointing the way to a sinister cavern carved like the open maw of a monster, and a charismatic spell-caster launching a spray of firebolts.

But the book isn’t just the art – though the art sure aids in suggesting the atmosphere of the game itself. This isn’t your brother’s role-playing game. For that matter, it isn’t your dad’s AD&D, either. Primary creator Joseph Goodman is on record as saying that it’s the first game based on a thorough reading of Appendix N from the original Dungeon Master’s Guide. If you’re not in the know, Appendix N was a list of recommended reading featuring the likes of Robert E. Howard, Michael Moorcock, Fritz Leiber, and all kinds of other creators of literary fantasy goodies, most of which my local library didn’t have back when I was in junior high, or I would have been swept away into some realms of adventure a lot earlier.

DCC has many similarities to the first versions of the original Dungeons and Dragons, and I’m sure you can look up any number of detailed discussions and analyses that will drown you in detail. But there are differences as well. It is not a clone of the original game, like some products of the Old School Renaissance; it is a relative. The similarity is there, but this one is less interested in minutiae and would prefer that you not flip back and forth through as many pages for rules. The gist is that everything is simpler, and better organized. Unlike most modern rpgs, there aren’t skills, just assumptions about what your archetypal character would know. There aren’t long lists of feats, just guidelines for how to create cinematic combat moments. The decrease in rules is liberating. 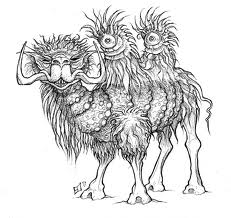 Don’t get me wrong – there are rules. You can’t have a game without rules. But here the rules take a backseat to the fun. One of the largest portions of the game is devoted to a long list of spells. Each one comes with its own variations – specifically what happens if the spell succeeds really, really well, or backfires badly. Most of Goodman’s literary inspirations weren’t filled with easy spellcasting – in those original fantasy and sword-and-sorcery stories, spells could be cast only at great cost, which is why the wielders of spells in the DCC role-playing game are always risking the chance of something going horribly wrong.

There are any number of things I love about the DCC role-playing game, but I think my very favorite may be the implementation of spell battles. We read about spell battles in books, and we’ve seen them in a host of movies, but I’ve never yet seen any role-playing game that enables the moment from, say Harry Potter and the Mumblety Something when Voldemort and Dumbledore exchange spell after dangerous spell, shaking one off to cast another. An inventive segment of the rules in DCC actually allows gamers to emulate those very scenes.

So, sure, there are some times when I do want games with feats and spell lists, and no, owning DCC doesn’t mean I’ll throw out my copy of Barbarians of Lemuria, but I surely plan on using it for years to come, and I’ll look forward to seeing what more goodies DCC develops – although one of the other great things about the DCC role-playing game is that you have everything you need but dice and a pencil in one hardback package.

I read through the rules and it all looks really great except for the non-standard dice utilization. Seems like a bad decision if you want to encourage adoption of the game.

[…] Edition) Dungeons and Dragons games like Astonishing Swordsmen & Sorcerers of Hyperborea, Dungeon Crawl Classics, Labyrinth Lord, and even the recent first edition AD&D reprints. And now that they have […]

[…] here on the BG blog, including Carcosa, Astonishing Swordsmen & Sorcerers of Hyperborea, Dungeon Crawl Classics, Labyrinth Lord, and even the first edition Premium AD&D reprints from WotC. But truthfully […]

And with Paizo announcing The Occult Adventures rulebook, I think that Pathfinder has hit my breaking point regarding options bloat.

The cleaner, improved version of third edition that they started out with has become a giant morass of classes, systems and options. It’s a grab bag of stuff now, constantly forced to expand to stay economically viable. A shame, though probably inevitable.

[…] Black Gate: “There are any number of things I love about the DCC role-playing game, but I think my very favorite may be the implementation of spell battles. We read about spell battles in books, and we’ve seen them in a host of movies, but I’ve never yet seen any role-playing game that enables the moment from, say Harry Potter and the Mumblety Something when Voldemort and Dumbledore exchange spell after dangerous spell, shaking one-off to cast another. An inventive segment of the rules in DCC actually allows gamers to emulate those very scenes.” […]