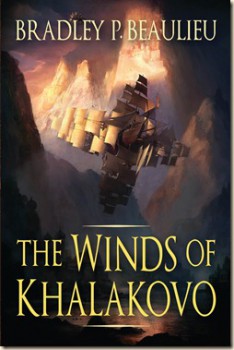 It’s a little daunting, when you pick up Bradley P. Beaulieu’s The Winds of Khalakovo. Before the story even starts there are three pages of maps, and a list of characters that’s extensive, and full of names that enjoy that horrifically Chekhovian similarity – the kind that makes you wonder how you’re ever going to tell any of these people apart. The setting of this fantasy novel diverges from the traditional, Medieval-Central-European analog, and instead is something more like a 17th-century Russia, filled with costumes and vocabulary that are likely to be quite alien to a regular fantasy reader.

But the allure of fantasy is the appeal of the strange, and once the apprehension has passed, The Winds of Khalakovo reveals itself to be something quite extraordinary.

The Grand Duchy is a series of archipelagos, plied by flying ships, buoyed along by magic. Khalakovo, a duchy at the heart of international trade, is playing host to the Council of Dukes, and to a wedding between its younger prince Nikandr, and princess Atiana of the neighboring duchy of Vostroma. Khalakovo and the other duchies have also been suffering a blight on their crops and fishes, its citizens (Nikandr among them) afflicted with a kind of wasting disease that has no apparent cause or cure. The landless Aramahn, whose elemental magic makes the flying ships of Khalakovo possible, have given rise to a splinter sect of terrorists called the Maharraht who want to break the generations-long peace between their peoples and destroy the duchies. And at the center of it all is a young boy named Nasim, with a mysterious connection to prince Nikandr – a boy who may be the solution to both the blight and the wasting, or who may prove to be the downfall of the Grand Duchy.

Beaulieu deftly manages several intricate plots, told through the triangle of perspectives of Nikandr Khalakovo, his betrothed Atiana, and his lover, an Aramahn woman named Rehada. The story plays out both politically – as a tragic terrorist attack causes a power struggle among the dukes, that gradually escalates into an all-out war – and metaphysically. In the midst of the politicking of the dukes, Nikandr struggles to find the spiritual source of the wasting, and to discover Nasim’s connection to it.

The Winds of Khalakovo gives us a picture of an epic struggle without a clear villain, but one instead in which conflicting motivations lead to a world clearly spiraling out of control. The Maharraht aren’t madmen; they’re nursing a legitimate grudge against a people they see as conquerors. The warring dukes aren’t power-mad maniacs; they’re genuinely concerned about the stability of the duchy, and the survival of their families. There is no epic evil here, but instead precisely the kind of compelling story at the heart of political drama.

Beaulieu’s pacing is also admirable; he’s mastered a slow-burn, a gradual reveal of increasingly complex depths, both in his slow illumination of the source of the deadly blight, and among his characters, who continually offer new dimensions to the reader. There’s nothing clichéd in The Winds of Khalakovo. Like the setting, the characters and story veer off from the traditional fantasy relationships and into a new territory that is rich, enigmatic, suspenseful, and deeply compelling.

The Winds of Khalakovo is the first book in a series; the second book, The Straits of Ghalahesh, will be released in April of 2012. More novels in this world would certainly be welcome, but beyond that, The Winds of Khalakovo is part of a trend of fantasy novels exploring the often-overlooked corners of our culture, and would be admirable for that even if it weren’t an excellent story on its own.
__________

Chris Braak is a novelist and playwright from Philadelphia, Pennsylvania. His most recent books, The Translated Man and Other Stories and Mr. Stitch, are available at Threat Quality Press. You can find out more about Chris at the Chris Braak Website Experience (www.chrisbraak.com).