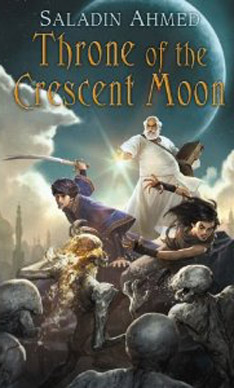 So, I got Saladin Ahmed’s Throne of the Crescent Moon in the mail yesterday.

It is quite possible, although I make no sworn confession, that I took up Throne in my own two hands, with its slick dust jacket – art by Jason Chan featuring dervish (complete with a two-pronged blade “in order to cleave right from wrong”), ghul hunter (with his blazing white kaftan that will not stain), Badawi warrior girl (awesome, green-eyed, growling, rude, and frickin’ Angel-touched too – which you have to like in a girl) and buncha vile bone ghuls with terrifyingly unsanitary teeth – and with this glossily just-read book spun ‘round and ‘round my kitchen, making noises that perhaps ought not to be approximated in print.

The only thing I’d ever read by Ahmed was “Mister Hadj’s Sunset Ride,” which appeared in Issue # 43 of Beneath Ceaseless Skies… And, um, I didn’t read that so much as listen to it over at Podcastle. But it impressed me, let me tell ya! As did a few of Ahmed’s entries and articles I’d stumbled upon in Ye Olde Blogosphere. 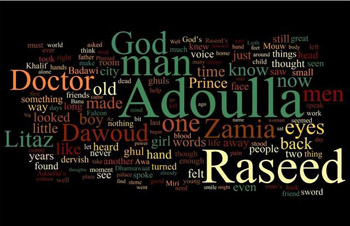 If Throne had been a bad book, I’d have been cast down to the depths of despair and egregious woe and aggressive lethargy from my disappointment.

Instead, the Happy Dance.

I guess most people don’t like spoilers. I’m not one of those people. I love spoilers. I love being told all about a book, and why whoever’s recommending me that book loves it, and which character is their favorite and why, and how about that doozy of a plot twist, eh?

Alas, I’ve learned the hard way that some people actually like to read their books before hearing all about them. So I won’t go into detail here about Throne. I will, however, give you Amazon.com’s summary:

The Crescent Moon Kingdoms, land of djenn and ghuls, holy warriors and heretics, Khalifs and killers, is at the boiling point of a power struggle between the iron-fisted Khalif and the mysterious master thief known as the Falcon Prince.  In the midst of this brewing rebellion a series of brutal supernatural murders strikes at the heart of the Kingdoms. It is up to a handful of heroes to learn the truth behind these killings:

Doctor Adoulla Makhslood, “The last real ghul hunter in the great city of Dhamsawaat,” just wants a quiet cup of tea.  Three score and more years old, he has grown weary of hunting monsters and saving lives, and is more than ready to retire from his dangerous and demanding vocation. But when an old flame’s family is murdered, Adoulla is drawn back to the hunter’s path.

There, that’s out of the way. Now I can tell you my favorite bits. Just kidding, just kidding.

What I will tell you is that I found this book extraordinary on several levels. The mere age of the protagonist Doctor Adoulla Makhslood (aforementioned kaftan-wearing ghul hunter) sets him apart from most heroes in fantasy. Usually someone in his sixties is relegated to the Gandalf-Dumbledore-Merlin role, mentor to the real hero of the story, an untried boy of sixteen or so (what my friend Mrs. Q likes to call “cake batter”), likely one who’d been born with a crown-shaped (or lightning-bolt-shaped) Fate and a Magic Sword (or wand, or whatever).

But no. Adoulla is the one we’re following. Adoulla with three score and some years under his belt. And sure, he has a young assistant he’s mentoring. Occasionally the story’s rather acrobatic Point of View leaps onto Raseed bas Raseed’s shoulders, letting you into the high holy head of a young dervish of the Lodge of God, giving you the dirt on what he thinks about the belching, farting, dawdling, scroll-consulting old people he must tag along with. 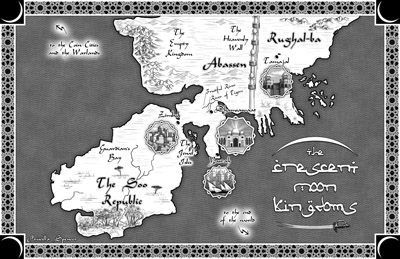 But mostly you’re right there with Adoulla. And you know what? That’s a fine place to be.

It’s so unusual having a naturally aged hero (unless he’s one of your immortal characters, elf or vampire type, who have been wandering their respective planets for centuries), with all the anxieties of age: the regrets, the long-nurtured flames, the tragic experience and the wisdom – and that other thing that sometimes comes with having a few years under your cool unstainable ghul hunting robes. It’s that thing that appreciates every meal, every conversation, that savors each weary footstep taken through a noisy, smelly, busy, uncaring, marvelous city – while also being prepared to leave it behind. Maybe not tidily, maybe not without taking out a few monsters on the way, but that thing that knows it will not last much longer in this world regardless of however many monsters it has to fight. Age. Wow.

I never thought of Fantasy as mostly a young person’s genre (I know, I know; I should have) until now. Yes, the genre has a few welcome middle-aged exceptions, especially lately. And yes, I know that Ahmed’s not the first to turn that expectation of youth and beauty on its head — but he’s the first I’ve noticed. And that could just be me getting older, or it could be something else.

Ahmed does tap into the urgent vitality of the Coming of Age story too — but his way of introducing that thread is more like inserting a soaring soprano counterpoint to a magnificently grounded baritone. His “warrior children” Raseed and Zamia are as ferocious and vulnerable and single-minded as teenagers can be – and as romantic, confused, and violent. You read them and you think, “Oh, what adults they’ll make! …If they live that long.”

It’s amazing that anyone survives this story. (No, that wasn’t a spoiler. I didn’t say who survived or didn’t, did I?) Adoulla and his companions live in dangerous times. “Dhamsawaat, King of Cities, Jewel of Abassen” faces a civil war between the corrupt Khalif and a brash Robin Hoodlyish revolutionary. There are all manner of ghuls to be fought, jackal-men, gaunt men, and above and behind all, the Traitorous Angel, Enemy of Heaven. Then there are the thieves and the watchmen, the religious zealots, the former girlfriends – each with their own kind of danger. Of such stuff are EPIC fight scenes made.

And O fight scenes! O THE FIGHT SCENES! Incantations and infernos, duels and dazzlers, claws and fangs, and, at one point, a well-whistled tune. O my!

And if the thought of fight scenes doesn’t do it for you, may I recommend the poetry? Scattershot through dinner conversations, battle strategies, fervent prayers and idle flirtations are the couplets of Ismi Shihab, poet of Dhamsawaat. Deceptively simple, bitter and tender, these little missiles are made of sharpest diamond. I wish Ahmed would write a whole book of ‘em, just for my pleasure.

All of this and fantastic female characters? Yes, that’s plural! That’s more than one! Of varying shapes and sizes and powers and ages, but all proud and fine and fiercely realized. I didn’t even have to look for them. They were right there, being all womanly and easy to relate to.

Oh, heck. Just read it, wouldja? Then we could have a real conversation.

And another book goes on the list. Y’all are killing my budget.

…It was Colonel Cooney, under the Black Gate, with a fountain pen.

Fantastic! Is is possible to be more excited about reading this book than I already was? YES! If I hadn’t already pre-ordered the audio CD, then I would do it RIGHT NOW! and it is an awesome deal, same price as the hardcover and on a single MP3 audio cd, all 15 hours of it.

@Ndoro, when budgets are tight… Request the book at your local library. This still helps the author out AND lets you be able to read it as well. OR buy/order the book now, read it right away and the resell it on amazon. If you do it quickly enough, you really won’t loose much if any $$$ in depreciation. that is the wonderful thing about a title being a NEW RELEASE.

I haven’t been able to read it quite as fast as you did, but it’s a page-turner, no question about it, and I’m loving every page. Definitely agree on how much fun it is to have the hero be the rude old man instead of the usual way around. Kind of Kolchak-ish 🙂

@RaptorBunny: Ooh! An audiobook! How tempting! You will have to tell us if it is quite dashingly read! And if the narrator is amazing!

@Dave: Are you going to review it on Podcastle? Or elsewhere? DO let me know what you think of it when you’re done! SO CURIOUS to talk to someone else who’s read it!!!

@Dave: P.S., I never saw the Night Stalker! I had to Google the reference. Any good? You rec?

Hmmmm…I have GOT to read this!

Add it to the pile…

Ayup! That you do, mate!

One of the most formative TV shows of my childhood. We should have had a Kolchak movie night while you still lived in Chicago! Now I have to drive to Rhode Island…

Except I know, I know, your kids have birthdays! Oh, well.

I am convincing myself to come to WorldCon in August, although I am not sure HOW. But we’ll see.

[…] start with BlackGate.com and their review. You can find it here. Things he liked? He loved that the protagonist is over 60 and he acts it. He’s still a hero, […]