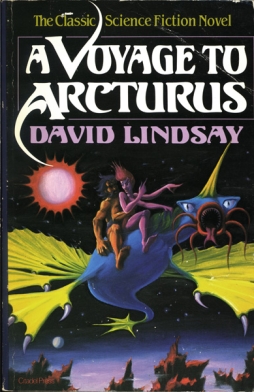 Writing about Romanticism has gotten me started thinking about forms, and conventions, and how we read a story. To some extent I’ve come to feel that contemporary ways of reacting to narrative are more classical than romantic; they’re more to do with structure and form than with trusting the individual genius. It seems to me that many readers, and critics, have become used to looking for certain things in a story, and have come to think of stories that function in a different manner as necessarily defective rather than distinct. And I feel this is a pity, since if we can’t accept the strange works of genius that succeed in defiance of everything we think we know about storytelling, then our experience of story becomes diminished.

Take, for example, David Lindsay’s novel A Voyage to Arcturus.

Lindsay’s first book, published in 1920, the book begins with two men preparing for a séance, the medium and his host; neither man appears after the opening pages. Instead we follow two other men who come to the séance, Maskull and Nightspore, who afterward are invited by an acquaintance of Nightspore’s, Krag, on a journey to a planet in the system of Arcturus. Maskull, who now swiftly becomes the main character, is dubious; still, he agrees to the trip, seeking some kind of adventure he can’t quite seem to articulate. Maskull spends much of the trip asleep, finally awaking on his own on the Arcturan planet of Tormance. From there, we follow him as he heads northward, learning about the planet and the mysterious forces that seem to be struggling for mastery upon it.

To describe the book in such a way, though, is not to give any real sense of its contents. It challenges all traditional sense of character and indeed story. Maskull’s given no real history or coherent drives. He decides to do things on the spur of the moment, then changes those decisions on a whim. His body alters repeatedly on Tormance, sprouting a third arm and new sense organs; he takes it with aplomb. The people he meets on Tormance are equally difficult to understand, developing loves and hates almost at random. And yet there is a sense of a kind of logic at work; a dream-logic, where emotions rise and fade for no obvious reason. 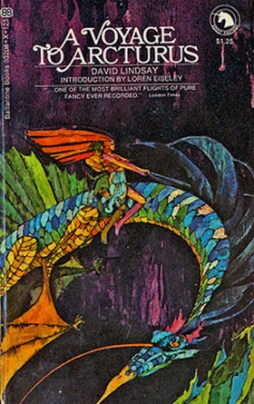 The book is basically episodic, as Maskull moves northward, encountering different people who espouse different philosophies and have different explanations for the quasi-spiritual phenomena of life on Tormance. Maskull becomes an everyman, moving through strange allegorical scenarios. The book’s a little like a gnostic Pilgrim’s Progress, less conventional than Bunyan in its theology, and altogether stranger in the world it creates.

One could also say the book reads like a mixture of George MacDonald’s dream-novel Phantastes (and Lindsay was a fan of MacDonald’s) with C.S. Lewis’ later Space Trilogy, specifically the first book Out of the Silent Planet (and Lindsay was an influence on Lewis). Lindsay captures MacDonald’s mixture of dream and story, the sense of a man’s dream-self wandering in a wonderland of unpredictable fantastic effects where nothing is sure. And, like Lewis, he transfigures what would become the matter of science-fiction by treating it as a venue for a kind of spiritual adventure story. Tormance is no serious speculation about what another planet might actually be like; it’s a venue for a discussion of spiritual perspectives.

Stylistically, the book’s similar to Lewis, or to Lewis’ fellow-Inkling Charles Williams. Elegant, if somewhat dry, it’s a kind of prose that seems to me to be of its era; rhythmically varied, and very clear, but indeed almost too clear. Difficult or unexpected ideas are presented very simply and matter-of-factly, often stripping them of resonance in the process. But then a strange thing happens in Arcturus, a kind of reversal: by simply describing the strangeness of Tormance, Lindsay makes it more strange, indeed conveying a pervasive strangeness that seems to be too deep for language to express. 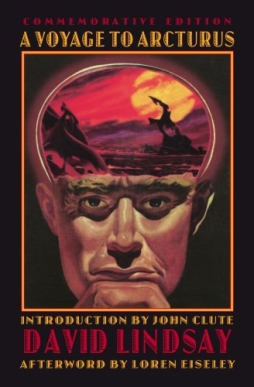 Which is another way to say that stylistically as well as structurally the book needs its unconventional form to express its unconventional ideas. Had Lindsay tried to depict Tormance realistically, the book would almost certainly have collapsed. Had he tried to present Maskull as a conventional character, with a past and a multi-layered consciousness, he would have been, I think, unable to present the book’s spiritual ideas clearly and concisely. The symbolic structure seems to need the unpredictability of dream to make it work; or, more precisely, the book as Lindsay conceived it is so inherently symbolic it must take on the sense of dream, the venue of experience where reality and the understanding of reality are fundamentally and necessarily symbolic.

You can perhaps get a sense of the feel of the book from the names Lindsay uses, odd portmanteau words that seem to hint at more than they immediately say. Characters have names like Joiwind, Panawe, Earthrid, and Corpang; place-names include the Ifdawn Marest, the Lusion Plain, and the Wombflash Forest. Tormance’s two suns are Alppain and Branchspell. Tormance itself seems to nod to both ‘torment’ and ‘romance.’

There is no pretense that these names came from a real culture. There is no particular sense of Tormance as an alien place; geologically, ecologically, it’s much like earth. Different characters have differently-shaped flesh as a result of the radiance of the blue sun, but no particular culture has developed from that. In fact, there’s no sense of technological development on the planet at all. There are new colours on this world with two suns, ulfire and jale, but they’re only another kind of strangeness — local colours, another element in the book’s spiritual symbolism. 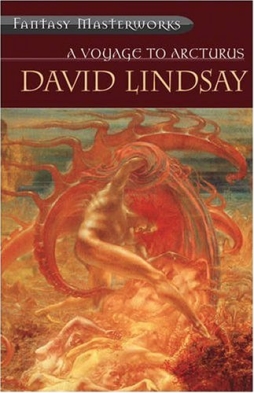 What holds the setting together is Maskull, the main protagonist, and his journey. Again, it’s like The Pilgrim’s Progress, as we follow our main character across a spiritual landscape to his final destination. Traditional narrative seems to fade away; the episodes have a kind of symbolic order to them, but from a story perspective could happen in almost any sequence.

This strangeness of the book is its greatest and, I feel, predominant characteristic. It is not weird, not new weird or old weird or any weird. It is strange, strange in its theme and its structure, strange with a deep and abiding strangeness that comes from a book shunning conventional narrative in order to find its own conventions, its own way to illustrate its themes.

To me, the book’s at its least successful when it’s most conventional. In terms of its narrative, the early Earth-bound chapters are unconvincing. Thematically, Lindsay’s gender politics seems a product of its time — though the book is complex enough that it can at least be seen to subvert much of what it puts forward. More profoundly, the theology which seems to underlie the book seems near the end to relapse into a sterotypical pleasure-denying Scottish presbyterianism, in which God is pain and pleasure is a delusion of the material world; it’s a masochistic gnostic-tinged presbyterianism, perhaps, but even as the narrative seems to loop around on itself in even stranger ways, the theme becomes simpler, more traditional, and correspondingly less challenging. 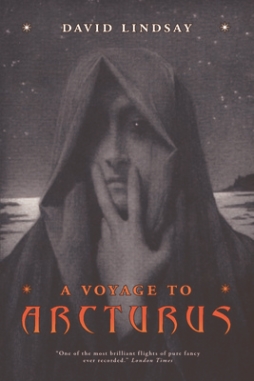 It has to be emphasised that the strangness of the work is in no way a barrier to understanding it. The strangeness is in fact necessary to grasp it, I feel. Without that sense of a unique vision, the book would be trite; would collapse into the episodic tale a description of its plot seems to imply. To try to reduce A Voyage to Arcturus, to summarise it, is to miss the point of what it is.

Since the book’s so dreamlike, you might think that you could talk about in terms of archetypal imagery. And I imagine that you could find Jungian elements in it if you tried; a shadow here, an anima there. But I also think that to do so would be to undermine the work, and indeed to fit it into a straightjacket — to turn away from the richness of its allusions. To insist on finding one’s chosen pattern in the work would weaken the strangeness, and therefore weaken the book. You’d be left with a story that would seem to be simply a poor piece of craft

Consider mythographer Joseph Campbell’s notorious monomyth. In his Hero With a Thousand Faces, Campbell tried to lay out a simple pattern that underlay all myth. He claimed to have found a hero’s journey, which could be found in any myth, and by extension any resonant story, from social realist novels to modern movies. Campbell managed this mainly by keeping the elements of his pattern as simple as he could, such that it could be made to fit almost any story simply due to its vagueness. Still, I think in laying out this pattern, simply by describing it as a “hero’s journey,” Campbell seemed to be saying something about the nature of story, about what story was there to do.

Worse, people since have tried to take his work of myth-criticism as a structural road-map, reversing the way it was meant to be used — rather than look at a story and see how it fits Campbell’s pattern, people look at the pattern and try to construct a story around it. Campbell’s monomyth has become a convention, a structure that defines story. And, therefore, which limits story.

I’d argue that, much as Maskull’s progress across Tormance seems to be a hero’s journey right out of Campbell (though with some interesting deviations), it cannot in fact be understood by the simplistic application of a pattern. If it could, it wouldn’t work. The story lives precisely when it cannot be grasped by an examination of archetypes. The power which makes it live comes from somewhere else; comes not from its adherence to the narrative patterns we thought we understood, but from its insistence that there are other ways by which to do things. And from its success in finding some of those ways.

The individuality of the text is its own reward. The justification of the book’s strangeness is the strangeness itself. And it is a strangeness that is really perfectly simple. A man travels across a strange landscape, becasuse he must. Never mind why, never mind the justification; never mind why he kills some of the people he meets, and loves others. Emotions and actions happen because they must. What we think we know about character is revealed as an illusion; character flows from what must happen in a story for that story to work. And story itself is more flexible than we thought, stranger and wilder.

A Voyage to Arcturus was a commercial failure when it was first published. But it’s been championed by readers and critics through the years ever since. It’s a valuable work, because as strange as it is, it’s a strangeness we need. If we do not stretch ourselves to accept what seems strange, it is we who are the poorer for it.

You can find the text of A Voyage to Arcturus here.

Matthew David Surridge is the author of “The Word of Azrael,” from Black Gate 14. His new ongoing web serial is The Fell Gard Codices. You can find him on facebook, or follow his Twitter account, Fell_Gard.

Dude I am crazy for that piece of shit A Voyage to Arcturus.

One of my childhood faves.

I did a paper in what we can intermediate or middle school in the U.S. very similar to this.

I got burned at the stake.

Burn me, but don’t burn the book!

My description: “Some guy after a seance gets Burroughs/Mars like transported to another world that is essentially an allegory for all sorts of moral and emotional and spiritual states. He grows a third arm and a strange organ on his head. Then things start to get weird…”

IMO though Bob Pepper was the best and IMO ONLY cover that did it real justice.