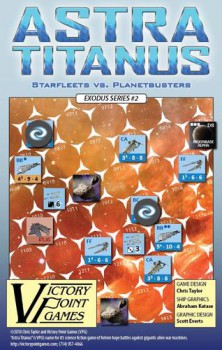 This February I sat down with a copy of the excellent solitaire game Astra Titanus and shared the review with Black Gate web site readers.

Astra Titanus wasn’t the only great looking game in the Victory Points Games stable, but it’s taken me a while to clear my schedule so that I could try out some more of their products.

Today I’m going to introduce you to two more, one which puts you in command of what is arguably the most famous submarine in history, Captain Nemo’s Nautilus, and the other which pits you against a horde of fantastic creatures assaulting your castle.

Be warned! You may not return alive!

Well, okay, YOU will, but you might lose the game.

You may never have asked yourself what you would have done if you’d had a chance to command the Nautilus and all its amazing resources, but anyone remotely familiar with the premise of the novel’s undersea exploration and adventure during the Victorian Age should immediately see the promise of the idea. Nemo’s War gives you the Nautilus and all the seas of the world, but it also sends the ships of the navies of the world against you. The more of them you sink, the more of them come after you, but it’s not possible simply to avoid them, for once there are a certain number of ships on the ocean, Nemo automatically loses. That said, there are four different paths to victory. If you want to primarily seek out undersea adventure as a scientist or an explorer, you are welcome to do so. You can also launch an all-out war, or follow the novel more closely and set out to liberate the oppressed masses by blowing apart the warships and commercial vessels of the imperial powers. Each path tabulates its victory points differently.

The game is made with simple but attractive pieces, including a three-fold map, a rule book, a pair of the world’s tiniest useful dice, and a whole slew of cardboard chits. Most of these are enemy ships, some of which journey onto the ocean automatically, some of which venture forth when you draw the wrong card, and some of which actively hunt you only when you become infamous enough to earn their wrath. In addition to the treasures you can seek on the seabed, you can upgrade the Nautilus by salvaging the ships you wreck, and incite rebellion among native peoples, which adds to your possible victory points. Along the way you will pull event cards that challenge your resolve. These are randomly shuffled moments from the novel, and to succeed against them you must roll higher than the challenge rating on the card, adding two dice together. If you wish to risk the crew, the hull, or even Nemo’s sanity, you can add a few extra points to the die roll, but if you still fail, those categories are lowered a notch.

Nemo is, simply, a joy to play. You begin pushing cardboard chits around a piece of paper but are soon engaged in a highly involved game of strategy and resource management. Fulfilling those victory conditions and reaching the highest point value (the more victory points, the better the result) is a terrific and enjoyable challenge.

An expansion module for Nemo’s War is available, including a few new cards to shuffle into the deck, some extra ships (if you thought fighting the existing ships was too simple) and some alternate rules. I’ve enjoyed the added cards, but I haven’t yet tried adding in extra ships, as the existing ones are enough of a hurdle! 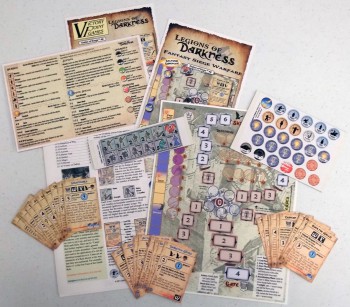 So in Legions of Darkness your castle has to survive a siege of three days and nights, with your choice of opponents – an army of ogres and goblins and trolls (with air support from dragons) or an army of the undead. Arrayed against them are your loyal archers, men-at-arms, and priests, as well as a team of heroes that should sound familiar to any fantasy role-player – a ranger, a paladin, a fighter, a thief, a wizard, a cleric… but you only get three, and each comes with special abilities that can alter the game play. A wizard, obviously, will get a bonus to any spells you want to throw, and a paladin gets a bonus to help increase morale, which will inevitably fall over the course of the three days and nights — and the higher your morale, the more actions you have each round to stave off the assault.

This, too, is a nifty little game. It comes with a simple but nice little board showing multiple attack paths to the castle – Sky, Gate, East and West wall, and Terror – used at night when the monsters launch an extra assault mostly intended to cause fear and drain resources.

And resource management and luck is what this game is about. As the monsters advance, you roll against them to try and push them back. If you fail, they plod forward. If you succeed, they’re pushed back… until you draw the next card. If they come too close, they can create a breach in the wall, which you’d best commit actions to fixing before the next round. If the enemies on high come close enough to the castle walls then they’ve automatically swept up one of your defenders.

The cards offer a range of events and even an occasional quest (at which your ranger excels) to obtain a better weapon or other advantage to help hold back the assault.

All three of these solitaire adventures from Victory Point Games have surprised me both with the degree of immersion that soon follows the launch of the game  and the amount of strategy needed to win. Because of the number of variables, no game ever plays the same way, meaning that if you, like me, were wondering about replay value, you can rest easy. Victory Point Games releases expansion packs from time to time, as they have done with Nemo’s War and with Legions of Darkness, to increase the challenge level.

I visited the Victory Points Game site as I was prepping to take this post live and discovered that they’re currently running a sale of games created by the designer of all three of these titles, Chris Taylor. I cannot speak from experience about his other titles, but I have surely enjoyed, and plan to continue to enjoy, these titles, so his “best of” package may be worth a serious look.

[…] to Howard Andrew Jones and his detailed write-up last year, I was already familiar with Victory Point Games. I knew they made terrific products, had […]