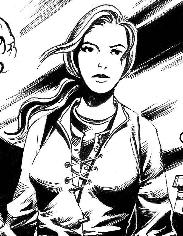 The Science Fiction and Fantasy Writers of America (SFWA) has released the 2002 Nebula Awards preliminary ballot, and we are very proud to announce that ElizaBeth Gilligan’s “Iron Joan,” from our Winter 2002 issue, has been nominated in the category of Best Short Story. The Nebula Awards are voted on, and presented by, active members of SFWA, and the Awards will be announced at the 2002 Nebula Awards Banquet to be held in Philadelphia on Saturday, April 19th.

ElizaBeth’s tale of a mysterious young woman’s arrival in a small town, and the effect she has on its inhabitants, was one of the most acclaimed pieces of fiction we’ve published, and we are very pleased to present “Iron Joan” online here in a Special Fiction Feature, complete in its entirety and with the original art by Chris Pepper. We hope you enjoy it.